IN THE GARDEN: Rough-leaf dogwood one of several native species to produce white blooms 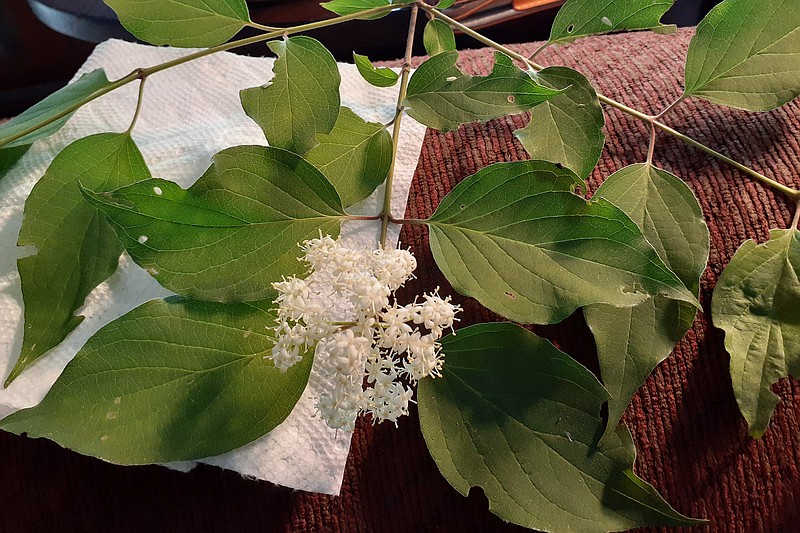 Rough leaf dogwood is one of several species of the native dogwood with blooms in white clusters. (Special to the Democrat-Gazette)

Q Can you tell me what kind of tree this is? [The reader sent a photo.]

A It is a dogwood — not the typical Cornus florida showy-flowered one, but one of the other native dogwood species. It looks like rough-leaf dogwood (Cornus drummondii) since the leaves are opposite each other. The top surface of leaves of that tree feel somewhat rough. It produces its blooms in May and June, followed by berries that turn white in the fall. There are several species of native dogwoods that produce white clusters of blooms like this one.

Q Have you ever seen a narrow-leaf plantain do this? [The reader sent a photo.] Is it a mutant plantain? I have always liked the plant, with its outer-spacey flower, and with a little encouragement it can make a handsome plant. But I've never seen this. 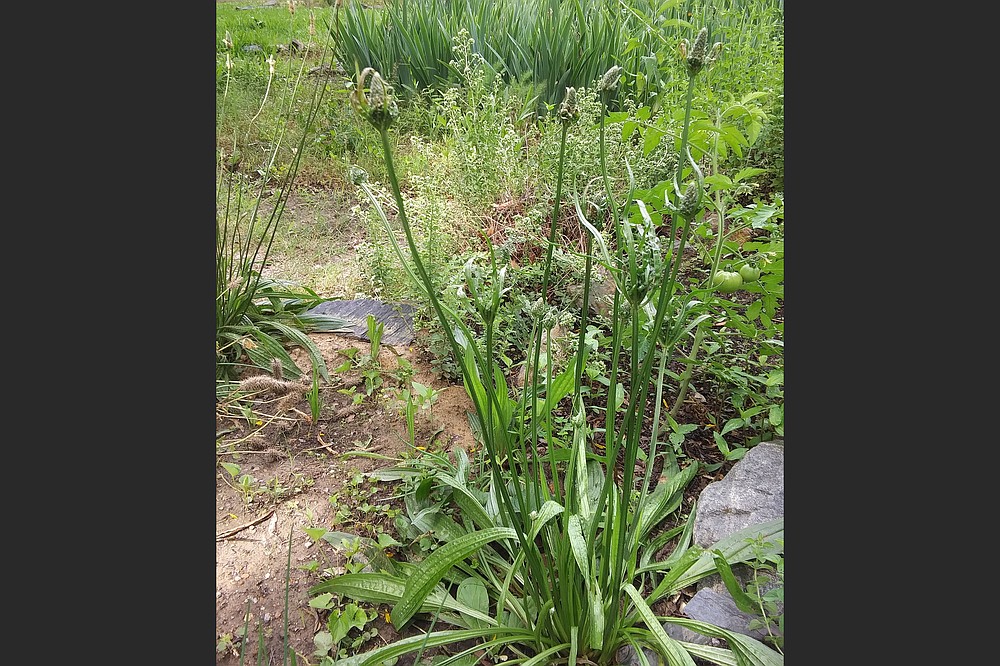 Leafy growth on the blooms of this narrow-leaf plantain resemble the effects of a virus. (Special to the Democrat-Gazette)

A I believe this is narrow leaf plantain (Plantago lanceolata). I have never seen the addition of extra leaves near the flowers. It looks like the disease asters yellow, which afflicts echinacea. The plant develops what is called flower phyllody — a technical term meaning abnormal development of floral parts into leafy structures. Interesting. Keep watching it and see what happens. So yes, it is possibly a mutant.

Q Help. I'm sure you have answered this in the past, but the azalea in my front yard is half dead, with a few blooms and a few flowers. What should we do?

A It is time to take action. Unless you are really attached to that particular plant, I would dig it up and start over. If you want to be patient, cut it back to the lower limbs that have green and see what happens. It appears to be at a fairly focal point in the yard, so replacing it could be a better option. I would try to separate lawn from flower beds a bit more. Grass can be quite competitive with shrubs, particularly shallow-rooted ones like azaleas. Plus, they are more susceptible to damage from a string trimmer or lawnmower when they are merged too closely.

Q I love your column and never can figure out "which kind" these are [the reader sent a photo]. When and how do we give these a big trim? I don't want them any bigger. The one in back is much smaller, but still I need to know when and how. 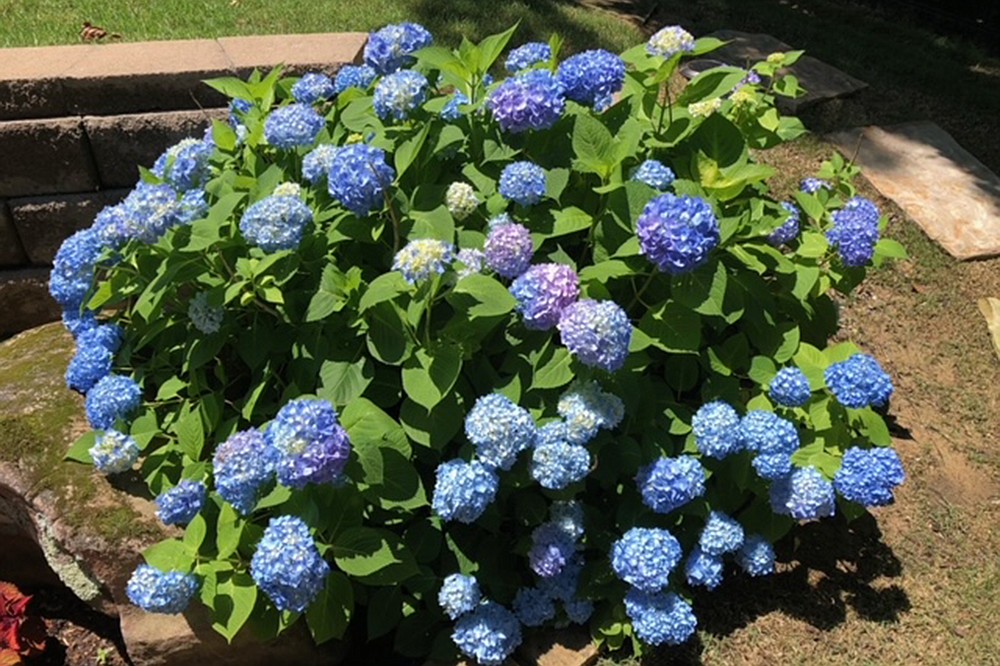 Old-fashioned big-leaf hydrangeas bloom on old growth and so are pruned right after they bloom, but remontant varieties bloom on their new growth, too. (Special to the Democrat-Gazette)

A All of the hydrangeas in your pictures are Hydrangea macrophylla, or big leaf hydrangeas. Most of the old-fashioned varieties bloom once a year on flowers they set before they go dormant in the fall. The time to prune without interfering with flowering is as the flowers begin to fade. Trim out as much as one-third of the tallest, oldest canes, cutting at the soil line. You can also prune other canes back some. The blue plant could be the variety Endless Summer, which does bloom on new and on old wood, so pruning will delay any later flowers. There are quite a few newer varieties like this. They are called remontant — reblooming. They can bloom on their new growth even if winter damages the old growth buds. I have been quite impressed by the lack of winter damage on these plants this year. I just knew our harsh February would have caused damage. I am pleasantly surprised. I think this just shows that snow is a great insulator of plants. 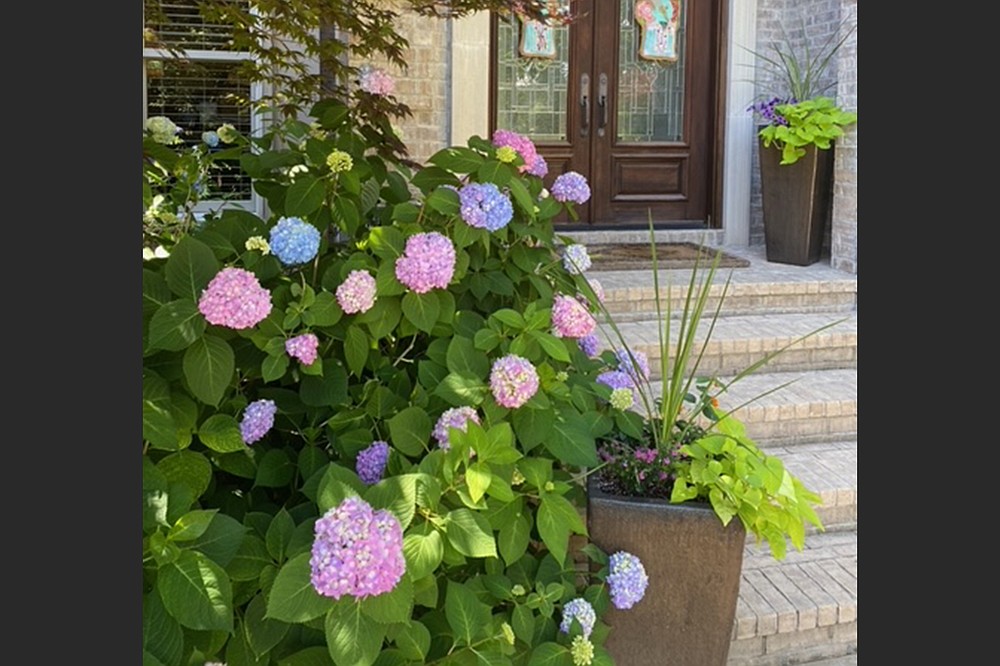 Many Hydrangea macrophylla plants came through the winter of 2021 in good condition. (Special to the Democrat-Gazette)

Q I need some advice. I have a large crab apple tree in my backyard. We love the tree, but grass has stopped growing under the tree, and now, many of the tree's roots have surfaced. I called a landscaper and wanted him to put down dirt to cover the roots and plant fescue grass seeds. He says I shouldn't cover the roots because it will kill the tree. This doesn't sound right to me, since the roots have always been underground before. He wants to put down pea gravel instead.

A A tree that produces surface roots will keep adding more roots even if you bring in some soil. We never want to bury a tree's existing roots too deeply. It can cause problems. I think you have a couple of concerns. Shade and roots are always going to be a factor. The northwestern part of the state can grow fescue much easier than the rest of the state — since that grass struggles mightily in heat and humidity. This would not be a good time to establish fescue, since we are entering the summer months. If the position is really shady, even fescue won't last long. Shade and grass are not good friends. I am not a huge fan of pea gravel since it tends to scatter into the yard. I would opt for a nicely mulched bed, or put in some pockets of soil and plant shade plants or ground cover.