Mining on federal lands at the center of groups’ dispute with U.S. government by MATTHEW BROWN THE ASSOCIATED PRESS | June 5, 2021 at 1:51 a.m. 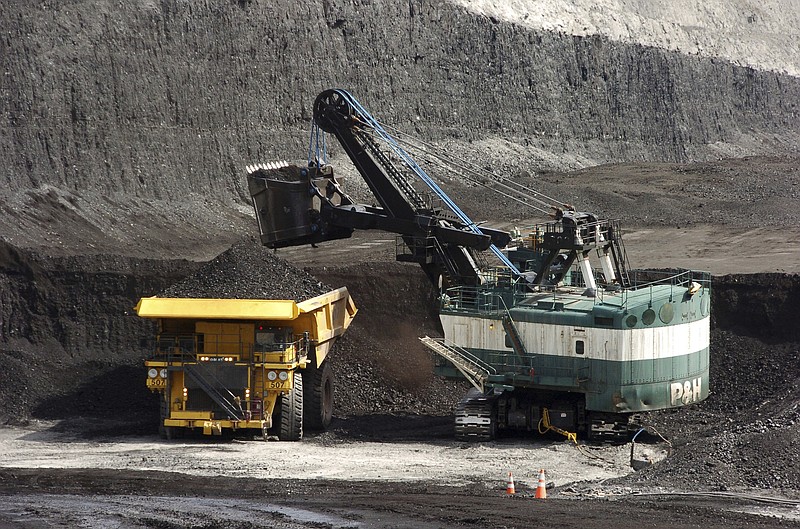 FILE - In this April 4, 2013, file photo, a mechanized shovel loads a haul truck that can carry up to 250 tons of coal at the Spring Creek coal mine near Decker, Mont. On Thursday, June 3, 2021, a U.S. judge has rejected the Biden administration's attempt to delay a lawsuit from several states and environmentalists who are seeking to end lease sales for coal mining on federal lands. (AP Photo/Matthew Brown, File)

BILLINGS, Mont. -- A U.S. judge has rejected the Biden administration's attempt to delay a lawsuit from several states and environmentalists who are seeking to end lease sales for coal mining on federal lands.

The coal leasing program was temporarily shut down under President Barack Obama because of concerns about climate change, and then revived by the Trump administration. There have been few sales in the years since because the use of coal has plummeted as utilities turn to cleaner-burning fuels.

Environmentalists want to shut down the program permanently and have been frustrated by the Biden administration's attempts to delay a legal challenge pending before U.S. District Judge Brian Morris in Montana.

Morris issued an order late Thursday denying the administration's attempt to delay the case for another three months, after already being granted a two-month extension in March.

Morris said lease applications are pending for thousands of acres of land holding at least 1 billion tons of coal, and the plaintiffs in the case face potential damage if their challenge to the program is stalled by the administration.

Growing concerns over climate change have put a spotlight on the once-obscure coal leasing program, which has gone largely unchanged and not been through a major environmental review since 1979. Companies have mined about 4 billion tons of coal from federal reserves in the past decade. The program brought in more than $500 million for federal and state coffers through royalties and other payments in 2019, the most recent data available.

California, New Mexico, Washington state and New York sued after then-Interior Secretary Ryan Zinke revived coal-lease sales in 2017. The Northern Cheyenne Tribe, joined by the Sierra Club and other environmental groups, also filed a legal challenge, while state officials from Wyoming and Montana have argued against reviving the moratorium.

In April, Interior Secretary Deb Haaland canceled Zinke's order. But officials said that did not automatically reinstate the coal moratorium and Haaland said her agency needed to further review the issue.

In 2017 and 2018, the government sold leases for 134 million tons of coal on public land in six states, according to figures provided by the Interior Department. That's a relatively small amount compared with previous years, for example 2011 and 2012, when more than 2 billion tons were sold in Wyoming alone.