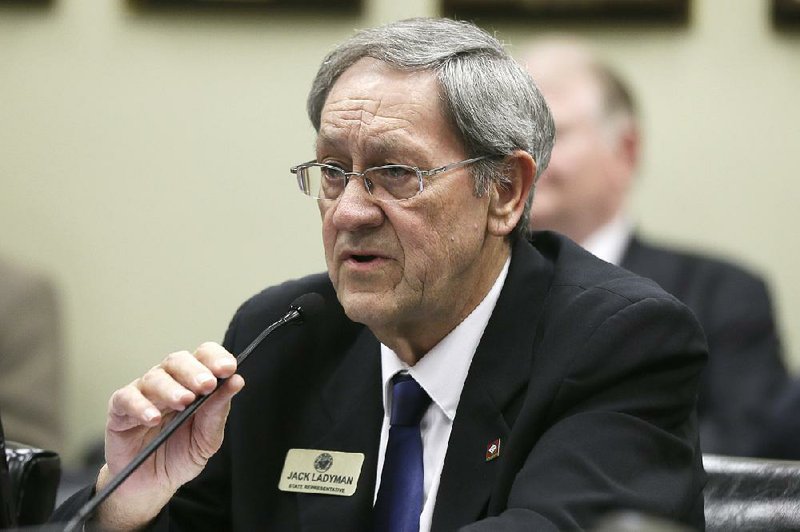 Rep. Jack Ladyman, R-Jonesboro, is shown in this file photo.

During a meeting of the Legislative Joint Auditing Committee, state Rep. Jack Ladyman, R-Jonesboro, queried state officials about what he called a particularly drastic increase in expenses for the plan from fiscal 2019, which ended June 30, 2019, to fiscal 2020, which ended June 30.

Factors identified as contributing to the plan's increased expenses included the greater number of people covered by the plan and the total of claims exceeding $250,000 increased by about $5.7 million, to about $13.6 million in fiscal 2020, Arkansas Legislative Audit said in its report.

In fiscal 2020, the people covered by the state's plan for public school employees contributed $120.1 million in monthly premiums; school districts contributed $103.9 million; and the state contributed $88.1 million, according to the report. The plan also received $15.7 million from a variety of other funding sources.

The people covered by the plan paid an additional $74 million to heath care providers and $24 million to pharmacies for co-pays, coinsurance and deductibles in fiscal 2020, the report showed.

If an employee's spouse gets laid off from work, the plan's policy is to allow that spouse to get covered by the plan, so that could have increased the plan's ranks in an economic downturn , he said.

Ladyman asked whether the costs for the insurance plan were going to increase in the future like they did from fiscal 2019 to fiscal 2020, because if they do, "we have got a big football" that lawmakers are going to have deal with.

Bleed said state officials are trying to do everything that they can to flatten the cost curve, and are trying to avoid curbing benefits as much as they can.

"We are looking at all our costs internally and trying to make some tough decisions to keep that curve down," he said.

"I just wonder ... are we doing what we need to do to help pregnant women and, if some of the newborn complications could have been prevented if we had a little better health care for the pregnant women?" Mayberry said.

Purvis said the state's health insurance plan for public school employees includes many teachers who are women and are of a child-bearing age.

"You may see a significant increase when you have a claim just because of that population in and of itself," she said.

"But we will be happy to look into that," Purvis said. " I do know that we have some healthy baby programs and all those kind of things that are kind of wrapped up, and we do have those services available."

Mayberry said, "We want to know what we can do to improve those outcomes and it would be nice to have just a little bit more information than just 'newborn with complications."'

The state's health insurance plans for both public school employees and state employees provide a wellness credit of $50 a month for a wellness checkup.

Sen. Kim Hammer, R-Benton, pressed Bleed about whether "we have really any tangible evidence that shows that wellness visit actually makes a difference in the person's health outcome."

Bleed said, "I assume that it would.

"I would hope that it would, given the amount of money we put into it," he said. "What we have looked at is the plan seeing a return on it. If somebody is healthy, are they consuming less health care and costing the plan less and the answer that we have gotten from our actuaries ... is the national studies do not show a significant return on it."

Bleed said it is hard to determine whether someone avoided getting sick because of a wellness visit to the doctor.

Hammer said the Legislative Council has hired a consultant to review the health insurance plans and that might be an option to consider to reduce costs.

He said his experience is that a wellness checkup is a good, friendly visit with a doctor, but doesn't do anything substantial that alters the course of a person contributing to the health insurance plan by becoming a healthier person.

For calendar year 2022, the state's Board of Finance on Tuesday is slated to resume its deliberations about what to recommend to lawmakers regarding changes in the health insurance plan for public school employees.

Act 1004 of 2021 dissolved the State and Public School Life and Health Insurance Board and temporarily transferred its duties to the Finance Board. That board will make decisions and policy determinations formerly decided by the health insurance board, until the General Assembly adopts a permanent governance system to ensure solvency of the two health insurance plans.

On April 20, the State and Public School Life and Health Insurance Board voted to recommend increased premiums for public school employees and retirees.

These proposals are projected to reduce the public school employees plan's forecast deficit from $70 million to $29.7 million for 2022. The plan has a dwindling reserve fund.