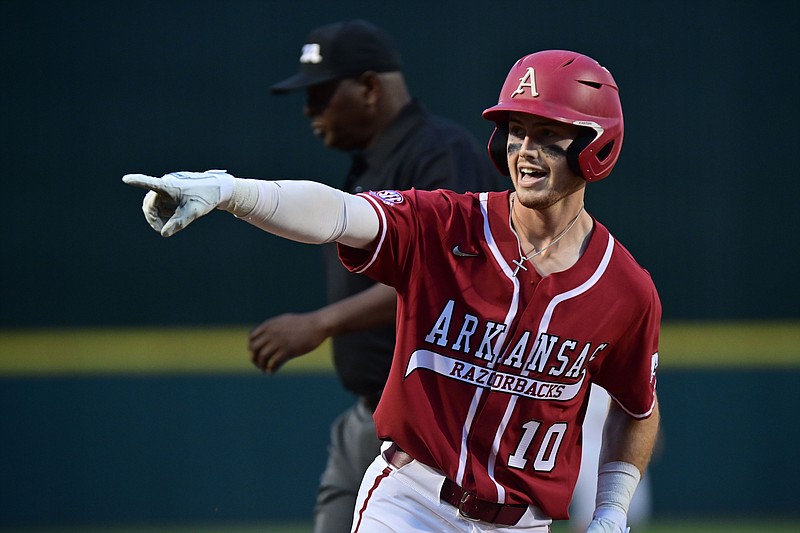 FAYETTEVILLE — Arkansas is in the driver’s seat at its home regional.

The top-ranked Razorbacks defeated No. 19 Nebraska 5-1 on Saturday night at Baum-Walker Stadium to win their 10th consecutive game and advance to the regional championship of the NCAA Fayetteville Regional.

Arkansas (48-10) will play Sunday at 8 p.m. against the winner of a game Sunday afternoon between Nebraska and NJIT. The Nebraska-NJIT game is scheduled to begin at 2 p.m.

The Razorbacks would advance to a home super regional with a win Sunday night or in an if-necessary, winner-take-all game Monday. Nebraska or NJIT would have to win three games in two days to win the regional.

Arkansas used its most reliable pitching tandem to handcuff the Big Ten-champion Cornhuskers (32-13). Starter Patrick Wicklander pitched five innings before giving way to closer Kevin Kopps after a leadoff single by Joe Acker in the sixth.

Kopps allowed a two-out single from Luke Roskam on a full count to score Acker, but the Huskers never seriously threatened during Kopps’ four-inning save. The Golden Spikes Award candidate did not allow a run, scattered 3 hits and struck out 6 to earn his 11th save.

Kopps earned his 11th win Friday with a 2 1/3-inning relief appearance during the Razorbacks’ 13-8 win over NJIT.

Wicklander (6-1) earned the win and gave Arkansas five solid innings that stabilized the bullpen after the Razorbacks threw seven pitchers in the opener. Wicklander allowed 1 run and 2 hits, walked 2 and struck out 7.

The Razorbacks added two runs in the second inning to go ahead 3-0. Braydon Webb’s RBI single scored Charlie Welch, who singled to lead off the inning, and Cayden Wallace added a sacrifice fly to plate Jalen Battles with the bases loaded.

The Huskers used six pitchers who combined to hold Arkansas to five hits, but issued 10 walks and hit a batter.

The Razorbacks scored two more runs in the sixth inning without a hit. Battles reached on a throwing error by Nebraska shortstop Spencer Schwellenbach to lead off the inning and scored when Christian Franklin walked with the bases loaded. Wallace scored on a passed ball by Griffin Everitt, who replaced Roskam behind the plate after third baseman Max Anderson left the game with an apparent hamstring injury in the fourth inning.

Roskam replaced Anderson at third base.

Arkansas had a chance to blow the game open after Robert Moore drew the team’s fourth walk of the sixth inning to load the bases. Nebraska reliever Max Schreiber got out of the jam by getting pinch hitter Ethan Bates to ground out to the second baseman on the first pitch. Bates was pinch hitting for Welch to create a left-on-right matchup against the right-handed Schreiber.

Kopps gets Everitt swinging for the first out.

Kopps bounces back from 3-0 to strikeout Chick swinging.

Nesbit fields a hot shot and throws out Matthews to end the game.

Smith tried to lay down a bunt on the first base line, but it was just hard enough for the first baseman to pick it up and tag him.

Moore doubles down the left field line to give the Hogs a baserunner with two outs.

Bates strikes out looking to end the inning.

Nesbit comes in to play third and Wallace goes to play right field. Goodheart is done for the day.

Acker grounds out to Battles to start the inning.

Hallmark singles up the middle before Schwellenbac strikes out swinging on three pitches.

Roskam hits a slow roller up the first base line. Kopps fields it and flips to Smith for the third out.

Opitz lines out to second for the first out.

Battles works a walk and Webb is hit by a 3-1 pitch and that prompts a pitching change.

Tyler Martin in to pitch for the Huskers. He's the sixth pitcher used by Nebraska today.

Goodheart pops up to short for the second out.

Wallace flies out to center to end the inning.

Chick starts off the inning with a double down the right field line.

Kopps bounces back with a strikeout swinging in the dirt.

The next batter hits a slow chopper to Battles who charges, fields and throws out the batter.

Leighton Banjoff pinch hits for the Huskers. He comes in for Steil.

Kopps gets Banjoff looking on a 3-2 pitch to end the inning.

Battles hits a ground ball to the hole between the shortstop and third baseman. The shortstop fields, throws, but the throw can't be handled by the first baseman and Battles reaches on the error.

Webb strikes out swinging and Goodheart hits a line drive that slices away from the right fielder, but he dives and makes the catch.

Wallace walks on four pitches to bring up Smith and Nebraska will go to the pen again.

Jake Bunz in to pitch for the Huskers.

Smith takes a fastball outside on a full count to load the bases.

Franklin walks on four pitches and the Hogs lead 4-1.

The next pitch gets away from the catcher and Wallace comes in to score.

Moore walks on a full count and that will be it for Bunz as he will take a seat amidst a loud Hog call.

Max Schreiber in to pitch.

Ethan Bates in to pinch hit for Arkansas.

Bates swings at the first pitch he sees and grounds out to second to end the inning.

Acker singles to center to start the inning.

Patrick Wicklander's day is done and Kevin Kopps is coming in for the Razorbacks.

Kopps strikes out the first batter he sees looking.

The next batter grounds out to Smith at third, the runner on first goes to second.

Roskam singles to left and scores Acker. It looked like Webb couldn't get the ball out of his glove cleanly to make a throw home.

The next batter grounds out to Battles up the middle to end the inning.

Smith grounds out to second to start the inning. It looked like that ball might get through the hole between first and second, but the second baseman slid feet first and made a great stop and throw to get Smith.

Franklin walks and that's it for Wynne.

Emmett Olson in to pitch now for Nebraska.

Moore flies out to left and Welch walks on four pitches to bring up Opitz with two outs.

Opitz strikes out swinging on a high fastball to end the inning.

Wicklander sets the Huskers down in order again.

He got two strikeouts and a line out to Battles in the fifth. He almost looks like he's getting better as the game goes on. Kopps was warming in the bullpen, but he's stopped throwing as the Hogs come up to bat in the fifth.

Luke Roscam in to third for the Huskers replacing Anderson.

Casey Opitz starts the inning with a one hopper back to the pitcher that is fielded and tossed to first for the first out.

Battles follows with a strikeout swinging.

Webb reaches on an error by the third baseman Roscam. The ball just went under his glove. Goodheart follows with a single to center that moves Webb to third and that will be it for Hroch.

Cam Wynne in to pitch for Nebraska.

Wallace grounds out to third to end the inning.

Wicklander goes out for his fourth inning of work. He's only allowed 1 hit, but he's thrown 65 pitches. Nebraska has fouled off 14 pitches tonight, including 8 in the third inning.

A 1-2-3 10 pitch innings is just what the Razorbacks wanted from Wicklander as he gets a flyout to right and two groundouts to Moore to end the inning.

Franklin strikes out looking, Moore pops out to short and Welch goes down on a check swing to end the inning. That's the first time Arkansas has gone in order tonight.

Wicklander retires the first two batters of the inning via the strikeout, his third and fourth of the game.

He walks the next batter. Wicklander strikes out Schwellenbac looking to end the inning. Wicklander has already thrown 65 pitches tonight. Something to keep an eye on as this game progresses.

Welch leads off the inning with a single, and Opitz follows with a strikeout looking.

Battles walks on a 3-2 count to bring up Webb.

Webb singles through the right side, Welch comes home to score and the Hogs lead 2-0. That will prompt a mound visit from the Huskers.

Goodheart walks to load the bases for Wallace.

Wallace hits a high fly to left. It's caught, but Battles scores to extend Arkansas' lead.

Smith lines a ball to center, but it's caught for the third out.

The first batter flies out to left before Chick singles up the middle for the first Nebraska hit.

A high fastball is swung on and missed for the second out.

Hagge grounds out to Moore at second to end the inning.

Matt Goodheart takes a 2-1 pitch and deposits it beyond the left-center field fence to give the Razorbacks the early 1-0 lead.

Wallace walks to give the Hogs a baserunner with nobody out.

Smith strikes out swinging. Franklin fouls a 3-2 pitch off his front foot and he's down on the ground. He hops back up after a minute and then takes a called third strike.

Moore hits a flare to left, but it hangs up in the wind and the left fielder catches it to end the inning.

Wicklander allows a two-out walk, but that's it in the first.

Neither team will be eliminated with a loss Saturday. The winner will advance to the regional championship Sunday night. The loser will play Sunday afternoon in an elimination game against the winner of Saturday’s game between Northeastern and NJIT.

Nebraska won the Big Ten regular-season championship with a 31-12 record against only conference opponents. The Cornhuskers were the Big Ten’s automatic qualifier for the NCAA Tournament because the conference did not host a tournament this year.

Nebraska won 8-6 over Northeastern in its regional opener Friday night.

Nebraska coach Will Bolt was a four-year starter and two-year captain as a player for the Cornhuskers under Arkansas coach Dave Van Horn. Van Horn coached Nebraska from 1998-2002. As a player, Bolt developed the nickname “Little DVH” because of similarities to Van Horn.

Nebraska was under contract to play two games at Arkansas in March, but the Huskers were unable to play those games when the Big Ten went to a conference-only schedule for the 2021 season.

Arkansas was the regular-season and tournament champion of the SEC.

The status of Arkansas first baseman Brady Slavens (ankle) is not known for Saturday’s game. Slavens ran on the field without a boot prior to Friday’s game.

Arkansas hit five home runs Friday to bring its season total to 98. That tied the Razorbacks’ 2018 team for the most home runs during a single season.