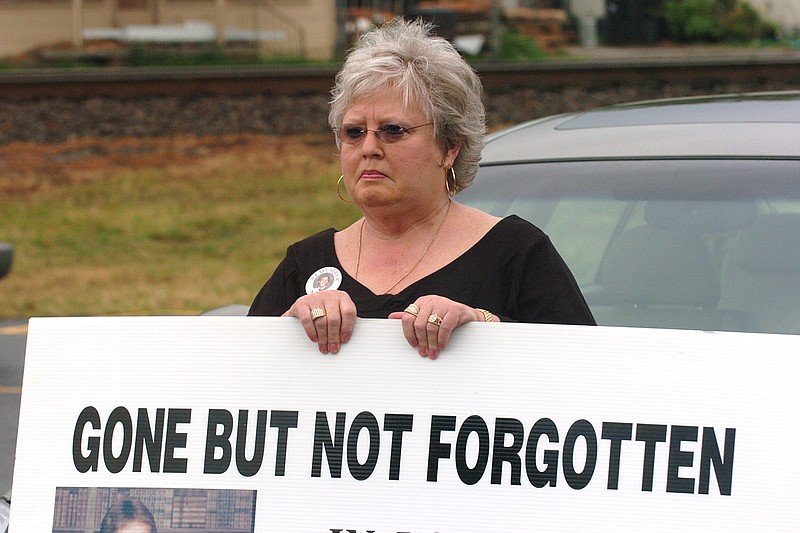 In this file photo Linda Ives is shown standing near the Cabot District Court entrance waiting for former Lonoke Police Chief Jay Campbell, who she believes killed her son, Kevin Ives in 1987. Campbell and his wife Kelly were sentenced on a number of unrelated charges. (Arkansas Democrat-Gazette file photo)

Linda Ives, the mother of one of two teenagers whose bodies were found more than three decades ago on railroad tracks just outside of Little Rock, died Thursday morning at a Benton hospital without any closure in the highly publicized case surrounding her son's death. She was 71.

The unsolved 1987 slaying of teenagers Kevin Ives and his friend, Don Henry, is one of the most high-profile homicide cases in Arkansas history, with an investigation tinged with international intrigue, conspiracy theories of local corruption and allegations of cover-ups that went as high as some of the most powerful political institutions in the United States.

In her fight for justice, Linda Ives became the central figure of an award winning book by investigative journalist Mara Leveritt titled Boys on the Tracks: Death, Denial, and a Mother's Crusade to Bring Her Son's Killers to Justice, published in 1999.

In the book's acknowledgements, Leveritt thanked Linda Ives "most of all" for her help, writing that it was Linda Ives "who gave me her time, her records and her trust and who keeps this story alive."

Linda Ives' sister, Carol Edmondson, said the cause of death is unclear, and that Linda lost consciousness and was septic due to "some kind of infection."

Early on the morning of Aug. 23, 1987, a Union Pacific crew spotted the bodies of Kevin Ives and Henry wrapped in a tarp on tracks in Alexander, near the border of Saline and Pulaski counties.

Unable to stop in time, the train ran them over, finally coming to a complete stop in Benton where Union Pacific employees reported the incident to the police.

The teenagers had stayed out late hunting the night before.

"I saw two boys lying side by side, like soldiers at attention," Leveritt wrote in her book, quoting one of the Union Pacific crew member's accounts. "They looked like they had laid down there and pulled this cover up on them like a blanket, part of it was off."

The crew member continued: "I noticed they never moved. Here we were, bearing down on them and there was no movement of their heads. They made no attempt to rise."

Though a gun was found near the bodies, investigators initially ruled the incident as a suicide or related to drug use; later reviews of autopsies revealed Kevin Ives and Henry had been murdered, their bodies placed on the track near or shortly after their deaths.

In 1988, Richard Garrett, an attorney for the victims' families, appeared on the NBC television show Unsolved Mysteries to discuss the murders. During an interview with the host, Garrett said he believed the two boys "saw something they shouldn't have seen and it had to do with drugs."

Kevin Ives' and Henry's deaths were ruled homicides in March 1990.

No arrests were ever made.

Speculation persisted throughout the years that the teenagers were murdered because they witnessed activity related to drugs that were being smuggled into the U.S. from Central America, possibly via an airport in Mena.

The 2017 movie "American Made" focused on the life of Barry Seal, a pilot who, in the 1980s, flew tons of cocaine from the jungles of Colombia to the American South, using the Mena Intermountain Municipal Airport as a sort of base.

Conspiracy theories persisted surrounding the boys' homicides after a number of murders and untimely deaths of people connected to the case.

Linda Ives filed several lawsuits to try to obtain documents and any other evidence that might reveal who killed her son.

She also worked with private investigators in her quest for answers.

He worked with Linda Ives in 2017 and 2018 on the case, helping to locate a potential witness to the murders.

"As far as I am concerned, Linda Ives is an angel, figuratively and literally now," Rounsavall said. "I really hated to hear about her demise."

Rounsavall said he does not think the murders will ever be solved.

"The only person who knows the truth now is Linda Ives," he said. "She had the chance to meet her son in the last 48 hours, Kevin Ives, and he has told her the truth – whatever it is."

On her Facebook page, Alicia Ives wrote: "The world has lost a bright light. She was a precious mother, wife, daughter, sister, family member, friend and a great inspiration to many."

"Her determination and iron will have left an indelible mark and moved mountains," Alicia Ives continued. "Now she rests peacefully in the arms of Jesus. Life will never be the same, but the memories she left behind will forever be treasured."

Karen Spears, a friend of Linda Ives who met her couple of years after Kevin Ives' death, spoke of her determination for justice.

"That is one amazingly strong woman," Spears said. "She never gave up her fight. She wanted justice, and she was going to continue until she couldn't."

As recently as the winter of 2019, Linda Ives posted a video on YouTube about her ongoing efforts to find out who murdered her son, asking for donations to help cover some of the costs of her never ending odyssey for the truth.

"I would just like to thank everyone out there who has been supportive," Linda Ives said in the video. "I hope and pray you will help spread the word out there and get the information out there; there has been so much going on recently, I almost feel like Kevin [Ives] and Don [Henry] have been left behind because it has been so many years."