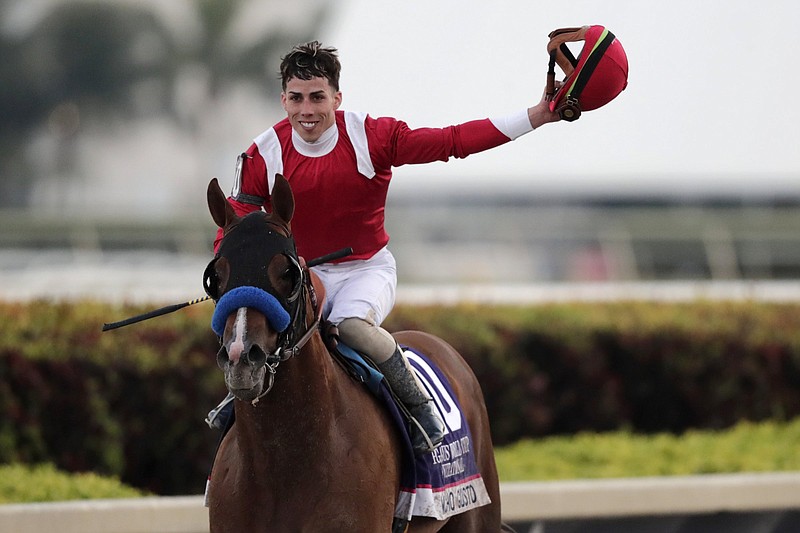 NEW YORK -- Jockey Irad Ortiz Jr. is out of the Belmont Stakes after a scary fall while racing but seems to have escaped long-term injury.

Ortiz was thrown off a horse during a race Thursday at Belmont Park and then trampled by the horse being ridden by younger brother Jose. Irad Ortiz was taken off the track on a stretcher and then to a local hospital before being released.

"It didn't look very good at all," Jose Ortiz told The Associated Press on Friday. "He got four stitches on his arm and six on his head, but he's doing, really, really good. It could've been a lot worse."

Jose on Thursday night tweeted a photo of his older brother with a bandage around his left wrist and a message indicating Irad's X-rays were negative and that he would be back in a couple of weeks. Friday, Jose said, "Probably less."

Irad Ortiz underwent a CT scan, though it was not immediately clear if he suffered a head injury beyond the cut that required stitches. He was moving his extremities and talking to medical personnel and others on the track moments after the fall.

"Relieved as soon as I would run down there and he said he was fine," Jose Ortiz said. "As long as he was talking and was conscious and could feel his legs and arms, I was relieved."

Irad Ortiz was scheduled to ride trainer Todd Pletcher's Known Agenda in the Belmont, looking for his second victory in the Triple Crown race.

Pletcher said a decision on a replacement won't be made until today. Jose Ortiz, Mike Smith and Javier Castellano are among the possibilities.

Asked whether he'd like to replace his brother in the Belmont, Jose Ortiz said, "Yeah, of course."

Trainer Michael McCarthy got emotional after winning the Preakness with Rombauer in his first try in a Triple Crown race because his family wasn't in Baltimore with him to enjoy the moment.

McCarthy FaceTimed with his wife and daughter but is relieved they're with him in New York for the Belmont.

"You're always looking for someone to celebrate with and share the emotions and share the experience with, so when you're there by yourself, it's just one of those things," McCarthy said.

McCarthy got a big embrace from Pletcher after the Preakness, a race his former boss has yet to win.

"It was great," McCarthy said. "I didn't have any family there, so that was the closest thing to family. Any time you can get the respect of your peers on a day like that, it's fantastic."

Mike Repole is worth a billion dollars and has won two Breeders' Cup races, but the New York native has never won his hometown Belmont Stakes. He and partners bought Overtook for $1 million in 2019 and hope he pulls off the upset.

"There's a hole in my resume, and it's the Belmont Stakes," Repole said. "I've probably said it 15 years ago when I had just entered the game and was winning claiming races that I'd rather win the Belmont than the Kentucky Derby. And now, 15 years later, I'm still looking."

Repole's closest near-miss was Stay Thirsty finishing second in 2011. He calls it "the toughest loss of my life."