Powell: Climate change not a main factor for Fed actions 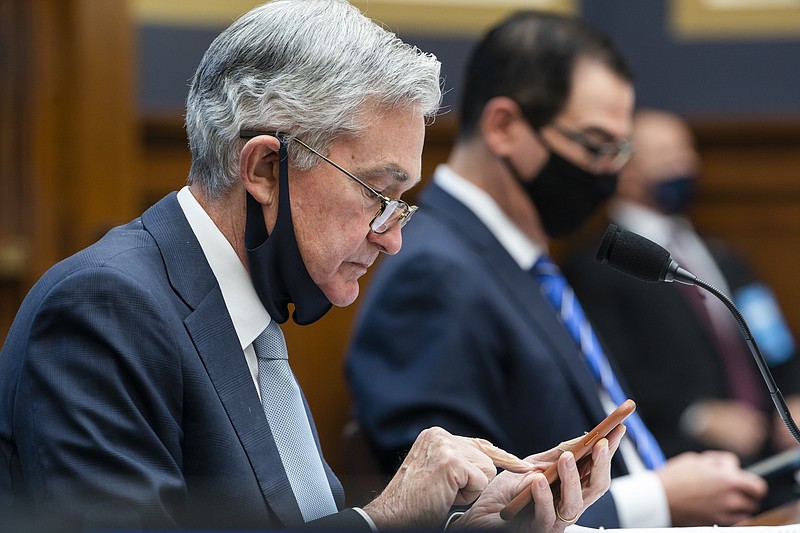 FILE - In this Dec. 2, 2020 file photo, Federal Reserve Chair Jerome Powell, left, arrives to testify before a House Financial Services Committee hearing on Capitol Hill in Washington. Powell says, Friday, June 4, 2021, the U.S. central bank is studying how climate change might affect banks. But the Fed doesn't see itself as getting involved in how to fight climate change. (Jim Lo Scalzo/Pool via AP)

FRANKFURT, Germany -- Federal Reserve Chairman Jerome Powell says the central bank can help assess risks to banks from climate change but that addressing the broader issue is up to private companies and elected officials, underlining that U.S. central bankers are not climate policymakers.

Powell said at an online conference Friday that "there is no doubt that climate change poses profound challenges" for the global economy, banks and financial institutions. But, he added, meeting that challenge is up to the private sector and elected officials.

The Fed can play a role by gathering data and quantifying the risk to banks, under its mandates to supervise financial institutions and support the stability of the financial system.

But "in the United States our society's overall response to addressing climate change will have to come from elected officials who have sought and received a mandate from the voters," Powell said.

"We are not, nor do we seek to be, climate policymakers," he said.

The bank was "quite actively" exploring how risks from climate change might affect its role supervising banks.

Powell's remarks came during an online forum on climate-related finance convened by the Bank for International Settlements, an association of the world's central banks, the Bank of France, the International Monetary Fund and the Network for Greening the Financial System.

Over the past year, the Fed has taken steps to incorporate the risks from climate change into its oversight of the financial system. A key part of the Fed's mandate, in addition to setting short-term interest rates to either stimulate or slow the economy, is regulating banks to guard against excessive risk-taking.

Earlier this year, 12 Republican senators wrote a letter to Powell accusing the central bank of moving "beyond the scope of the Federal Reserve's mission." The senators questioned whether the Fed should be analyzing climate scenarios because it has no jurisdiction over environmental policy.