He calls for safeguards to ensure people held accountable by Joseph Flaherty | June 5, 2021 at 3:37 a.m. 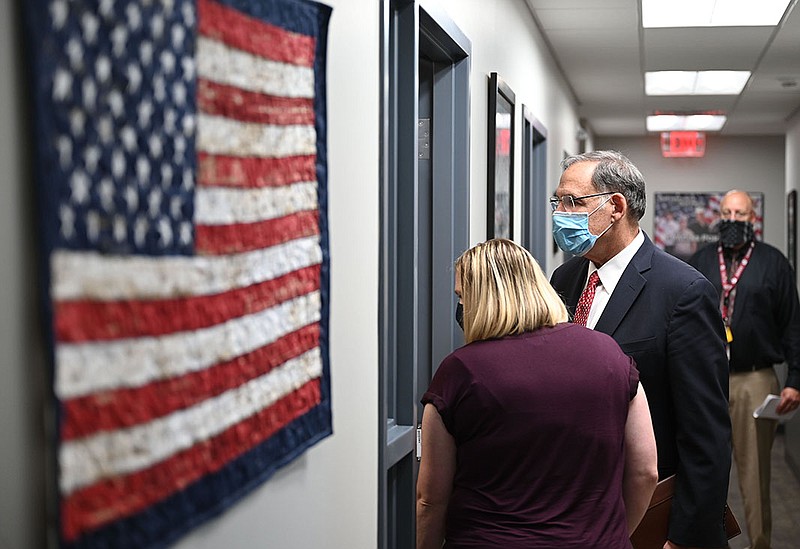 U.S. Sen. John Boozman, R-Ark., walks through the halls of the Little Rock Vet Center during a tour Friday. The visit was the senator’s first to the new center, which offers counseling services. (Arkansas Democrat-Gazette/Stephen Swofford)

The pathologist, 54-year-old Robert Morris Levy, was sentenced to 20 years in prison in January after pleading guilty to involuntary manslaughter in the death of 61-year-old John Ray Gibbs, a veteran whose cancer Levy misdiagnosed.

While impaired, Levy would report to work at the Veterans Health Care System of the Ozarks in Fayetteville, according to the report.

In an interview during a visit Friday to the Little Rock Vet Center, Boozman called the case "a tragedy." He said he was pleased that "the process played out -- he was actually convicted. He's going to go to jail for a long time, very deservedly."

Moments later, Boozman added, "We do want to hold people accountable and then, so important, we want to make sure that we can do all we can do -- put the safeguards in place so it doesn't happen again."

Regarding potential safeguards, Boozman suggested that "when you're in a professional situation like that, there's a reluctance sometimes to hold people accountable when you see actions that are occurring that you're concerned about."

He said officials should be encouraged to step forward when they see actions that are inappropriate.

He acknowledged that some hesitancy might exist "because you're talking about careers when you start making accusations and things," but added that "we can't have tolerance for those kind of events that happened with letting things slide."

Boozman said officials have looked at legislation regarding people who report to work impaired, and referred to Levy's completion of a treatment program, after which he continued to go to work impaired.

According to the report issued by the VA's Office of Inspector General, Levy had been removed from clinical practice at one point in 2016 as a result of a high blood alcohol content test during work hours, "but returned several months later after attending a treatment program."

The report said after he was ultimately removed from his position in 2018, Levy admitted to criminal investigators that he had been an alcoholic for 30 years.

Levy told investigators that after his 2016 removal, he bought a substance online known as 2-methyl-2-butanol, or 2m-2b, that was similar to alcohol but more potent and undetectable in routine drug and alcohol screening methods, the report said.

Daily or weekly tests for drugs and alcohol in Levy's system conducted as part of his return to work were all returned negative, according to the report.

"The enormous number of serious diagnostic errors by Dr. Levy was the result of his failure to interpret specimens correctly. The errors remained undetected for years in part because of his manipulation of pathology quality management data and deficiencies in quality management processes," the report said.

"Facility leaders failed to promote a culture of accountability. The [VA Office of Inspector General] found a culture in which staff did not report serious concerns about Dr. Levy in part, because of a perception that others had reported or they were concerned about reprisal. Any one of these breakdowns could cause harmful results," the report said. "Occurring together and over an extended period of time, the consequences were devastating, tragic, and deadly."

A review of nearly 34,000 cases interpreted by Levy found more than 3,000 errors, a figure that included 589 "major diagnostic discrepancies," according to the report.

During his visit to the Little Rock Vet Center, Boozman met with staff members who described the community-based counseling work at the center.

Heather Morrow, the center's director, told Boozman that personnel primarily serve combat veterans or those who have experienced sexual trauma while in the military. They also serve family members of individuals who died while on active duty or while they were clients of the center, she said.

Boozman and the center's staff discussed challenges regarding public transportation for veterans who want to get to the center, as well as broadband connectivity.

Morrow told Boozman that the center has seen a "huge influx" of clients seeking marriage and family therapy recently as the number of covid-19 cases has fallen.