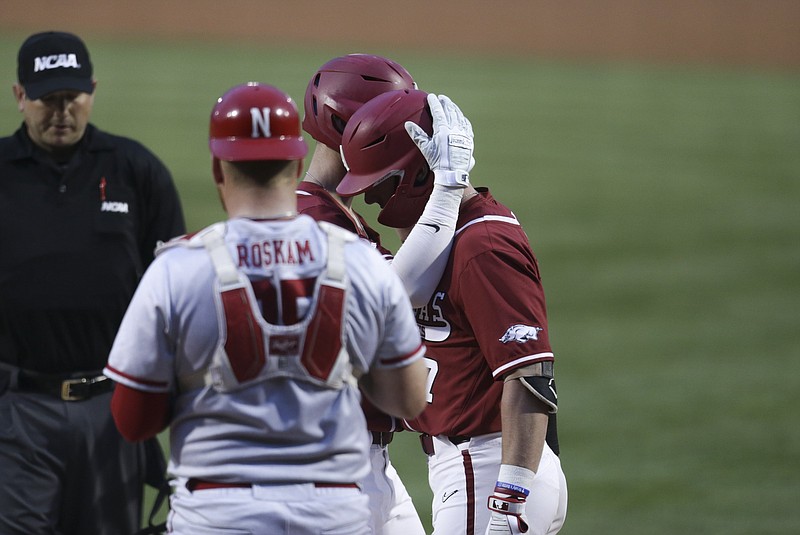 Arkansas infielder Matt Goodheart (10) and Cayden Wallace (7) embrace after a score Saturday, June 5, 2021 during the first inning in the second game of the NCAA Fayetteville Regional at Baum-Walker Stadium in Fayetteville. (NWA Democrat-Gazette/Charlie Kaijo)

Goodheart, a senior from Magnolia, batted leadoff and hit the fourth pitch from Nebraska starter Chance Hroch over the fence in left-center field.

The Razorbacks' 99th home run this season broke the school record of 98 set in 2018.

Goodheart hit his 13th home run of the season and joined a five-way tie for the team lead with Christian Franklin, Robert Moore, Brady Slavens and Cayden Wallace.

The Razorbacks hit their 98 home runs in 2018 in 69 games. They played their 58th game Saturday night.

Eric Cole and Heston Kjerstad each hit 14 home runs in 2018 to lead the Razorbacks, and Casey Martin and Carson Shaddy each hit 13. Dominic Fletcher had 10 home runs.

NJIT, playing in the NCAA Tournament for the first time, has been adopted by Arkansas fans during this weekend's Fayetteville Regional.

Most of the crowd of 1,517 who attended Saturday afternoon's game at Baum-Walker Stadium cheered for the Highlanders as they beat Northeastern 3-2.

"I can't thank them enough for being so great to us," NJIT pitcher Ryan Fischer said of the Arkansas fans. "Southern hospitality is a real thing. It's awesome that they were behind us today."

Arkansas beat NJIT (New Jersey Institute of Technology) 13-8 on Friday, but the Highlanders gained the fans' respect as was evident when the coaching staff picked up dinner from a restaurant on Dickson Street.

"We walked in there, and [the fans] gave the coaching staff a standing ovation," NJIT Coach Robbie McClellan said. "Around the hotel, people were stopping by at breakfast and saying they really enjoy watching us play.

"It's been really cool, and I know that from speaking to a couple of our kids and their parents, this is the best baseball experience they've ever had, and it's because of the people of Arkansas. So it's been a real treat for us, and really happy that they've kind of taken to us."

Dave Rappaport, the father of NJIT relief ace Jake Rappaport, had a heartwarming message for Arkansas fans. He and his wife Linda have attended the games at Baum-Walker Stadium in person.

Wrote the elder Rappaport on Twitter: "Being a Highlander parent, I have to say I have never been treated so well by people in a place we have visited. My hat is off to the people of Arkansas. The world would be a better place if everyone took a page out of their book."

Bobby Smittle -- the Arkansas super fan known as "Hognoxious" -- sat behind the Highlanders' dugout wearing an NJIT T-shirt given to him by one of the player's fathers.

Arkansas Coach Dave Van Horn faced an opponent whose head coach was one of his former players or assistant coaches for the 15th game this season when the Razorbacks played Nebraska.

Cornhuskers Coach Will Bolt played for Van Horn at Nebraska.

Other Arkansas opponents this season whose coaches have ties to Van Horn were Southeast Missouri State, the University of Arkansas at Little Rock, Texas A&M and Tennessee.

Rob Childress, who was fired as Texas A&M's coach after the regular season ended, was an assistant for Van Horn at Texarkana Junior College, Northwestern (La.) State and Nebraska.

Going into Saturday night's game, Van Horn was 11-2 against teams coached by a former assistant coach or player, including 4-0 vs. Southeast Missouri State, 2-0 vs. UALR, 3-1 vs. Tennessee and 2-1 vs. Texas A&M.

NJIT second baseman Daniel Helfgott wears an elbow pad to protect his left arm as he crowds the plate and takes more than occasional plunkings from pitched balls.

The pad couldn't help him when a Cam Schlittler pitch bounced off his helmet in the fourth inning on Saturday.

Helfgott took his third hit by pitch of the regional and his 18th of the season to tie for 19th nationally. He was tagged out in a brief rundown off second base on Nick Hussey's sacrifice fly a few minutes after being bonked on the helmet.

"He's been smoked a lot," NJIT Coach Robbie McClellan said. "He gets low and crowds the plate. I don't know if he's got a magnet in that elbow guard or what, but he gets smoked a lot."

Arkansas was the home team against Nebraska, but it's not because the Razorbacks are the NCAA Tournament's overall No. 1 seed.

The Razorbacks and Cornhuskers both were the home team in their Friday games by virtue of being the regional's No. 1-2 seeds.

Northeastern first baseman Ian Fair hit an opposite-field double off the wall in the fifth inning against NJIT, extending a significant streak.

The double allowed Fair, a junior from Walpole, Mass., to reach base in his 27th consecutive game.

All 10 Razorbacks who came to the plate in Friday's regional opener notched at least one hit among the team total of 13 in a 13-8 win over NJIT.

The achievement was made possible when Jacob Nesbit, a pinch runner in the sixth inning and defensive replacement at third base, came through with a two-run single in his only at-bat with two outs in the seventh inning.

Christian Franklin had a team-high three hits, including his 13th home run, while Robert Moore had two hits as the only two Razorbacks with multihit games.

Nebraska reliever Koty Frank entered Friday night's game against Northeastern with the Huskers trailing 4-0 with two runners on and one out in the top of the fourth.

Frank returned Jeff Costello and Max Viera -- the Huskies leadoff and two-hole hitters -- on one pitch each, coaxing a fly ball and ground ball out to escape the inning. Those two outs were the first of 11 in a row retired by the 6-2 right-hander from Tushka, Okla.

"Just coming in the game and not letting it kind of fold on us, getting the two pitches two outs that was a big hold for us," Frank said. "And I had the confidence in our offense that we were going to hit. It just feels like a ticking time bomb. It was just a matter of time before we did start hitting."

It was a good Friday for Arkansas hitting coach Nate Thompson.

In the afternoon the Razorbacks had 13 hits, including five home runs, to beat NJIT.

"A tireless worker & incredible developer of young men!" Nate Thompson wrote in a congratulatory tweet to his brother. "One of the very best coaches in the nation. Earned everywhere he's been, and now he's a National Champion! I'm so proud!"

Mitch Thompson, a former assistant coach at Mississippi State, Auburn and Baylor, has been McLennan's coach since 2014.

Arkansas shortstop Jalen Battles got on base four of his five at-bats against NJIT in Friday's game without having to run hard to first base.

Battles was hit by pitches in the third and fourth innings, hit a home run in the fifth and walked in the seventh.

In the eighth inning, NJIT finally kept Battles off base when he flew out to right field.

Eric Musselman, the Arkansas basketball coach who is known for his extensive T-shirt collection, added to it with two from NJIT.

Musselman proudly held up his two newest shirts -- one red, one blue -- in a photo taken in his office.

Of course Musselman was wearing a Razorbacks T-shirt.

Pat Ackerman, Arkansas' recruiting coordinator, has a friend on the NJIT staff who got the T-shirts for Musselman.

Musselman tweeted he was "blown away by the resiliency" of the Highlanders in their 13-8 loss to the Razorbacks on Friday.

The NJIT Twitter account replied with a thank you to Musselman and said the Highlanders will be on the Muss Bus as long as the Razorbacks aren't playing NJIT.

"We just didn't play well," Huskies Coach Mike Glavine said after NJIT's 3-2 victory. "We didn't have any energy. Couldn't get anything going.

"Today it was like a baseball hangover. We played that wild night game, it was back and forth, and today we just couldn't get anything going."