Arkansas trip a hit for Durojaiye 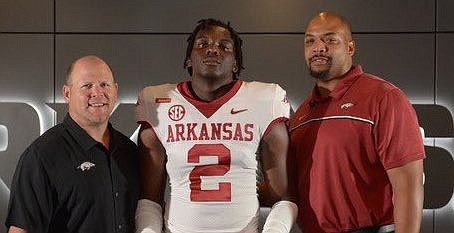 Defensive end Tomiwa Durojaiye traveled from Delaware for his official to Arkansas and he is glad he did.

Durojaiye, 6-5, 250 pounds, of Middletown High School, has a top eight of Arkansas, Duke, Georgia Tech, Iowa, Michigan, Northwestern, South Carolina and West Virginia, but he maintains his recruitment is open.

Hanging out with the players and coaches and seeing the fan support were highlights.

“The fan base stood out to me a lot,” he said. “The way the fans are, it's just a strong connection. It's like those guys here are pro athletes."

Distance from home won’t be a factor in his college decision.

“I'll be playing far away from home anyway,” Durojaiye said. “I've been looking for a home away from home, and Arkansas feels like that.”

Durojaiye recorded 45 tackles, 19 tackles for loss, 8.5 sacks and had 2 blocked kicks in 8 games as a junior while earning first team All-Conference and All-State honors.

“I met his wife this weekend. She's a nice woman,” he said. “I really just loved how the coaches interact with each other and interact with the players. Then talking to the hosts and the other players, they were like, 'The coaches are like this 24/7.'

"That meant a lot to me that the coaches are not going to change up after they recruit you. They're going to be the same guys.”

Hearing the players rave about the coaching staff was reassuring.

"A lot of players mentioned from the previous staff to this staff here, you can sense a change both on the field and off the field,” Durojaiye said. “You can call any of these coaches at any given time and they'll pick up the phone for you. That meant a lot to me.”

Prior to visiting Arkansas, he said he planned to officially visit Georgia Tech next weekend followed by trips to Northwestern and South Carolina, and several unofficial visits.