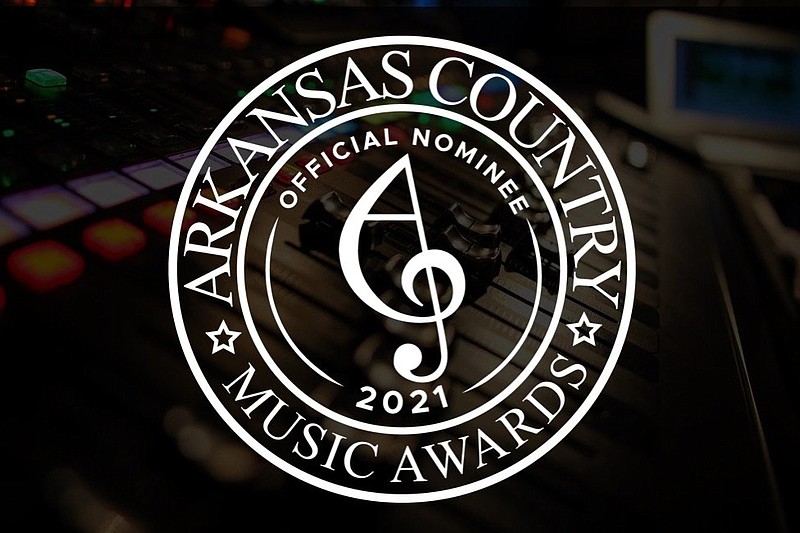 Conway becomes the center of the state's indie country universe on Monday, as the fourth annual Arkansas Country Music Awards names its 2021 winners.

No doubt, many will be wondering what honors Erin Enderlin will capture this year.

Conway native Enderlin, whose nine wins represent the most for one performer since the awards started in 2018, has four nominations this year — Entertainer, Country Artist, Female Vocalist and Songwriter. Fun fact: Enderlin has won every year in the Songwriter category. 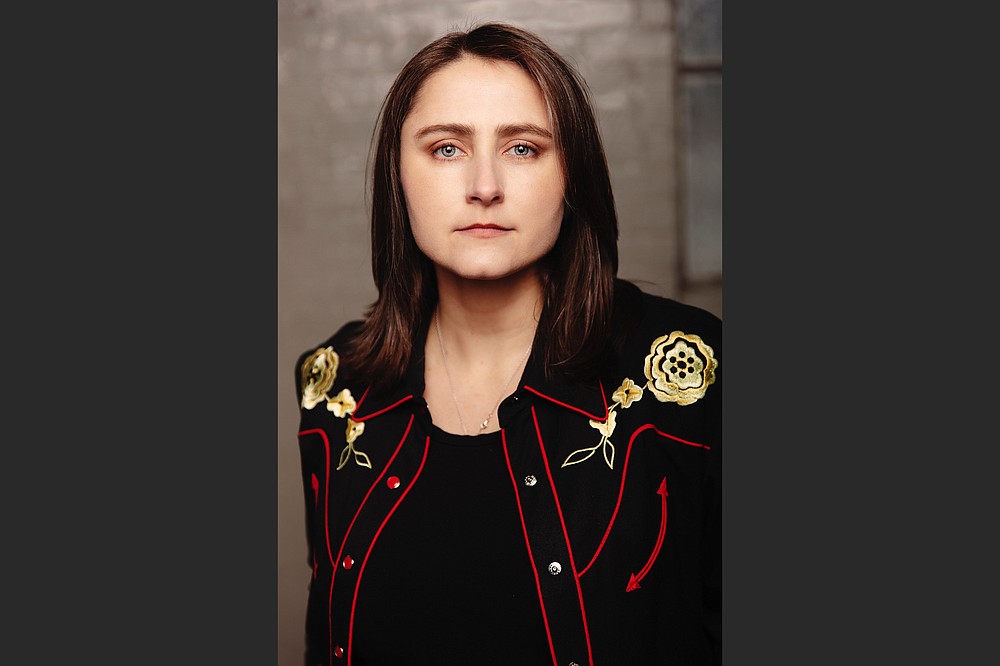 Erin Enderlin has won nine Arkansas Country Music Awards. She is nominated in four categories this year, including Entertainer of the Year and Female Vocalist of the Year. (Special to the Democrat-Gazette/ Ryan Nolan)

Even for a veteran like Enderlin, the Arkansas Country Music Awards can be pretty nerve-wracking.

"I try not to think about it too much," the 39-year-old says from Nashville, Tenn., where she lives. "I love being able to go back and be part of it, but every year it's more nail-biting. There is so much talent. I'm overjoyed and I appreciate that I've won all these awards, but I know there's a ton of amazing talent from Arkansas and the competition is really stiff."

Asked if there is one category in particular she'd like to win this year, she pauses for a second.

"You know, I want to work toward getting Entertainer," she says. "That would be really special for me. Being a woman, I've watched Reba McEntire and Barbara Mandrell represent on a national stage, and that's important to me. I'm really focused on my live shows and being the best I can be at that."

Enderlin, whose last album was 2019's "Faulkner County," will be among the nominees performing during the show. 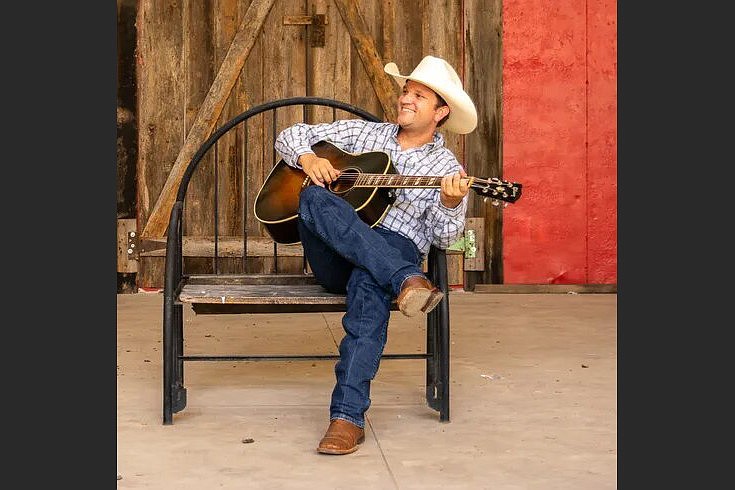 David Adam Byrnes is up for five Arkansas Country Music Awards. The show will take place Monday at Reynolds Performance Hall at the University of Central Arkansas. (Special to the Democrat-Gazette/Emily Wall)

David Adam Byrnes, who is based in Fort Worth, is the 2020 Male Vocalist winner. This year he has five nominations — Entertainer, Country Artist, Male Vocalist, Album for "Neon Town" and Video for "Old School," which was directed by Dylan Rucker.

"It was just a feeling of fulfillment," he says of the attention from the awards. "I've been doing this for so long; I've had two record deals and a lot of battling within the industry. To see the way that things have taken off since we got to Texas, and then to see your home state recognize it and show you that much love, it made me feel like things are finally where I always thought they could be."

Byrnes, 34, grew up in Sherwood and was glued to the TV when award shows were on.

"George Strait is my hero, and I remember watching him when I was a kid win Entertainer of the Year awards and thinking it would be cool as heck if I could pull that off." 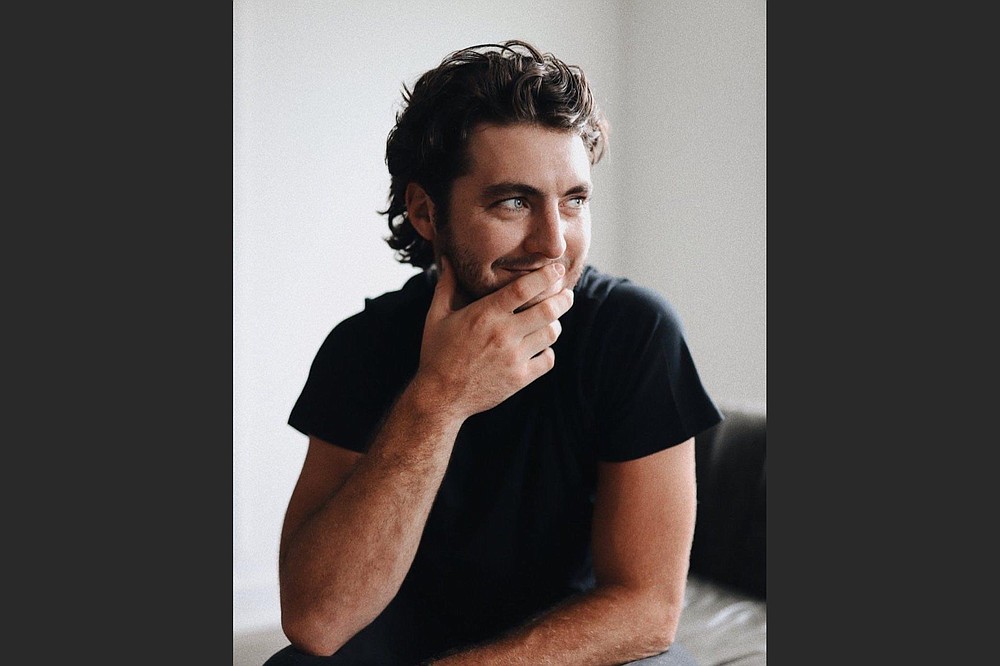 Greenwood native Jabe Burgess makes his first appearance at the Arkansas Country Music Awards on Monday. He is nominated in five categories, including Entertainer, Country Artist and Male Vocalist of the Year. (Special to the Democrat-Gazette/ Madeleine Beck)

"It's crazy. I was pretty pumped up when I saw the nominations," says the 25-year-old Burgess, who is nominated for Entertainer; Country Artist; Male Vocalist; Video for "Everything But Us," directed by Noah Coffey III; and Song for "Dianne's Song."

Burgess grew up on his grandfather's farm in Greenwood and started playing guitar when he was 10. He headed to Nashville about three years ago to chase that neon rainbow, as Alan Jackson says.

"The people back home are some of the people I care most about making proud," Burgess says of being nominated. "A lot of the stuff I write about is about Arkansas and how I grew up in Greenwood. For the Arkansas CMAs to take notice of that, it means a whole lot."

Burgess will perform a new song, "That's When You Know It's Love," during the show.

"It's one of my favorites, and hopefully we'll get it released by the end of the year," he says. 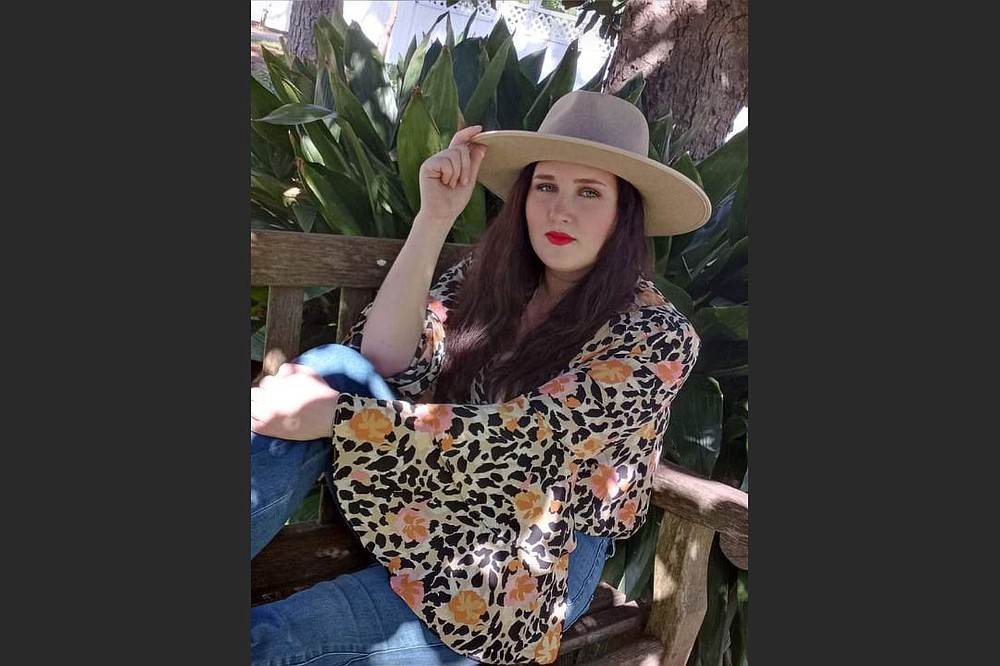 The 21-year-old Stormont, who lives near Heber Springs, was nominated in 2020 for Young Artist of the Year. This year's five nods — Americana Artist, Acoustic Act, Inspirational Artist, Female Vocalist, and Song for "On Your Own" — were a bit of a shock.

"[Three-time award winner and producer] Jon Raney called me and said, 'You need to look at Facebook right now. You have five nominations for the ACMAs,'" Stormont says. "I was like, 'You'd better not be messing with me.' It really surprised me."

On Monday she will perform the tender, moving "On Your Own," which is, in part, about a friend's abusive relationship.

"That song is very personal to me and it would really mean a lot to win [Song of the Year]. It's not a surface-level song at all," she says. 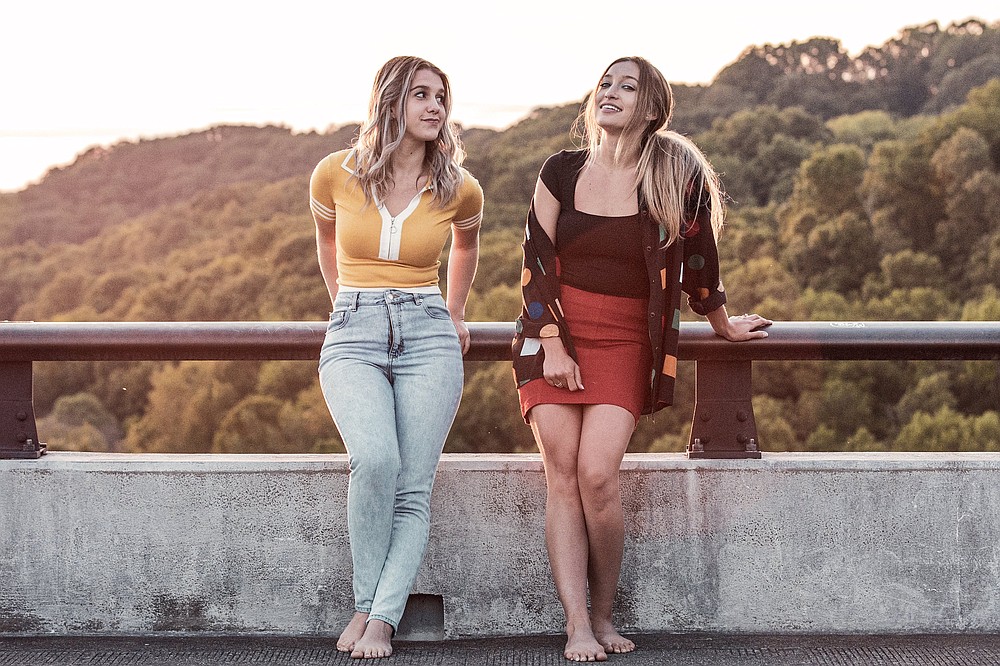 Alaina Stacey and Katy DuBois of Maybe April are up for three awards at the Arkansas Country Music Awards. Last year, the duo won Americana Artist of the Year. (Special to the Democrat-Gazette/Rob Bondurant)

Maybe April, the Nashville-based duo of Alaina Stacey and Jonesboro native Katy DuBois, are among those vying for Entertainer of the Year (Lance Carpenter rounds out the category); they are also up in the Americana and Vocal Group categories.

The pair met at a songwriting camp in 2012 and performed first as a trio with another member before becoming a duo. Their latest effort is the 2019 album "The Other Side" and they are the reigning Americana Artist winners.

"We're super honored," DuBois says. "It's nice to be recognized in the state where I grew up. I'm proud to be from Arkansas, and I'm glad the Arkansas Country Music Awards celebrates Arkansas artists."

Stacey, who is from Chicago, says it makes her feel like an honorary Arkansan.

"It's been cool to see how Arkansas musicians stick together and support each other. I feel lucky that I get to sort of be from Arkansas by association."

The two will attend Monday's show, something they couldn't do last year as the event was held online due to coronavirus. 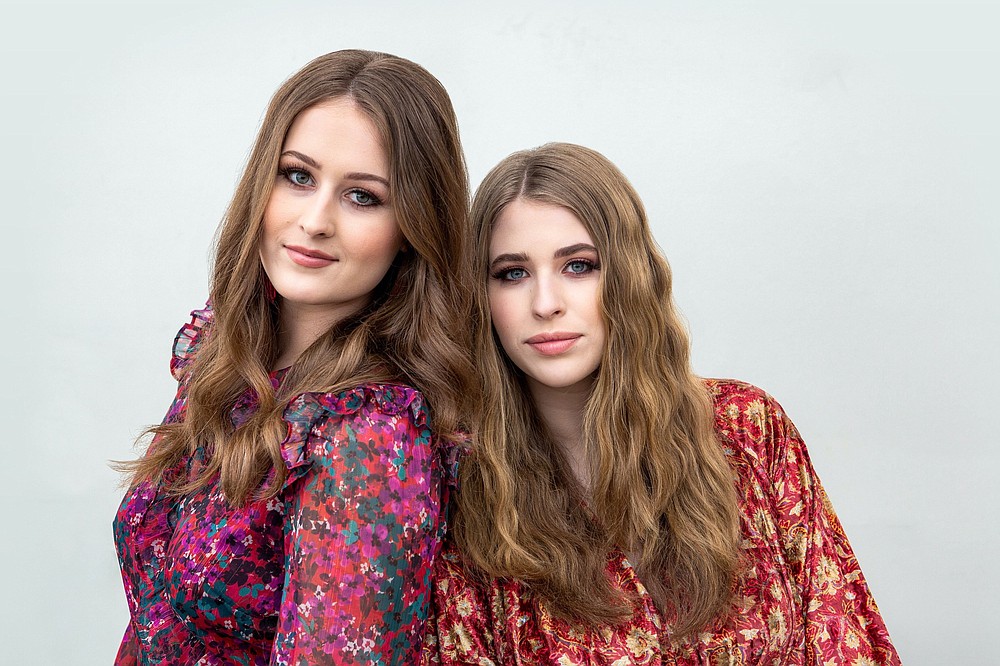 The Render Sisters, Mary-Keaton and Stella, are nominated for two Arkansas Country Music Awards — Young Artist of the Year and Video of the Year for “Lost Boy,” directed by Joe Sikkema and Pam Tillis. (Special to the Democrat-Gazette/Chad Crawford)

Another duo making their first appearance at the awards are teenagers Mary-Keaton and Stella Render of The Render Sisters. They are nominated in the Video category for "Lost Boy," which was directed by Joe Sikkema and Pam Tillis; and for Young Artist.

"We were so shocked and excited," says Mary-Keaton, 17, about their reaction.

"Lost Boy" was the sisters' first video, and was filmed on their family's farm. "So much work was put into that, and we are so excited for people to be able to hear about it," Mary-Keaton says. The pair will also perform the single during the show.

Perhaps you're wondering where major-label Arkansas artists like Justin Moore, Matt Stell and Ashley McBryde are among the nominees. The Arkansas Country Music Awards focuses on independent artists who produce music on their own, or with the help of a small record label. Among the requirements is that the artist must have been born in Arkansas, have spent an ample period residing here or have performed here regularly, according to nominees' eligibility information at the awards' website, arkansasmusic.org. Once nominees are announced, winners are determined by a committee of music professionals and a collective tally of fan voting.

[RELATED: See the list of categories and nominees for the 2021 Arkansas Country Music Awards]

"One of the things that is so special about this is that my fans are a part of it," Enderlin says. "They have been so supportive of me, and they have taken the time to vote. And I want to win for them."

Charles Haymes, awards show vice president and longtime country-music columnist and historian, will host the show along with 2014 Miss Arkansas Ashton Gill. After last year's online event, which was also broadcast on KARZ-TV, Haymes is ready to get back to a live, in-person performance.

"There was a lot of momentum after our 2019 show in Maumelle," he says. "Ticket sales for [2020] were popping, but then covid hit. The decision was made to move it from June to August, but that didn't work, so it became a TV event." 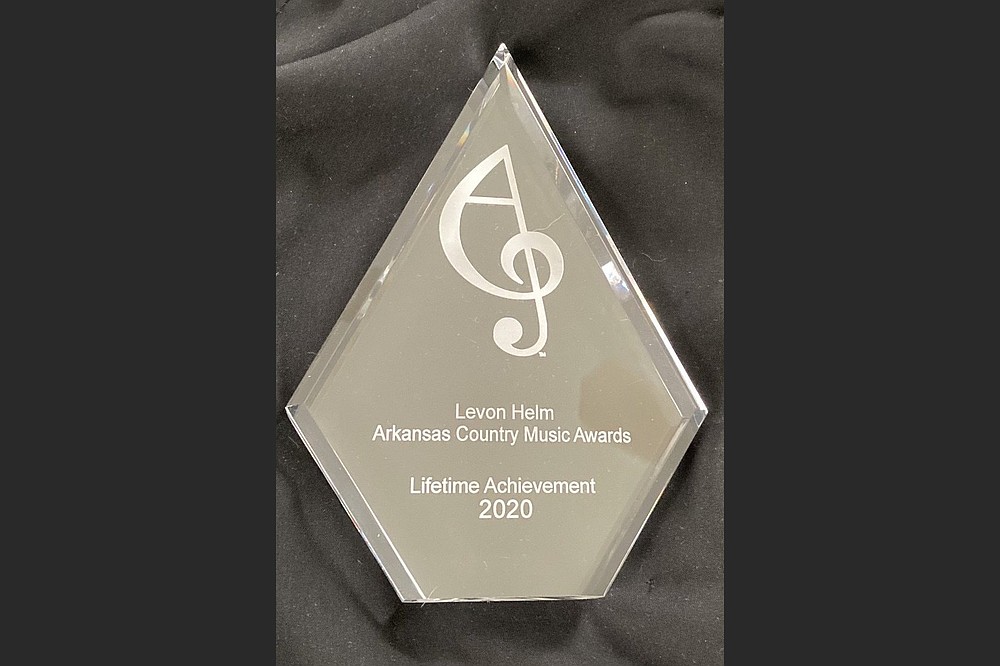 The late Levon Helm was among the 2020 Lifetime Achievement Award recipients who will be honored during this year’s event. (Special to the Democrat-Gazette/ Arkansas Country Music Awards)

Because of time restraints, some of the awards weren't presented during the broadcast, he says, which is why last year's Lifetime Achievement honorees — Rich, Helm and Holyfield — are included this year.

"It was a good show; people all across the country watched," Haymes says. "But there is no substitute for the live show. It's going to be really good."