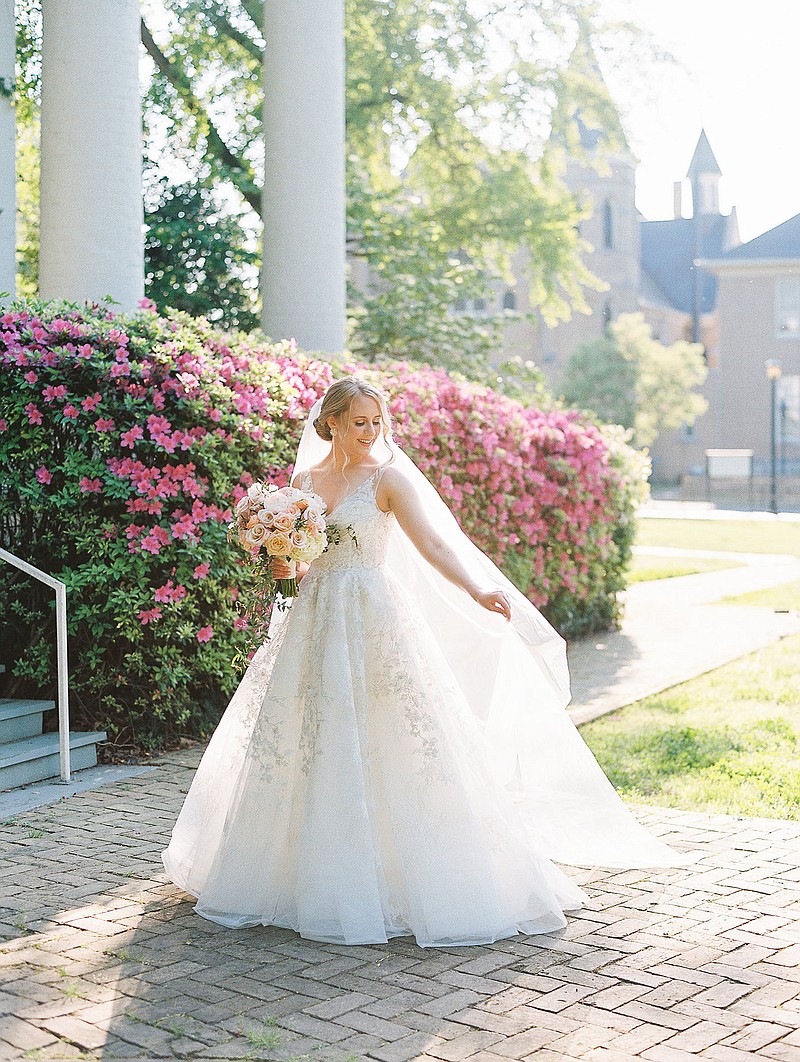 Parents of the bride are Drs. Suzanne and Michael Saccente of Little Rock. She is the granddaughter of Betty and Herbert Lutz of Chester, S.C.; Arlene and Tom Saccente of Melbourne, Fla.; and George and the late Lillian Kelly of Patchogue, N.Y.

Railings at the church entrance were decorated with greenery and the sanctuary held two cathedral arrangements of peach and ivory wedding flowers. Music was by organist Jason Pennington-Saugey.

The bride was escorted by her father. She wore a sleeveless ballgown of Alencon lace embellished with intricate metallic embroidery. Her silk tulle veil was cathedral-length. She carried a gathered Edwardian clutch-bouquet of peach and cream roses, white peonies, ivory and peach ranunculus and trailing jasmine vine.

Serving as maids of honor were Rebecca Orsak of Atlanta and Karen Santana-Garces of Washington. Bridesmaids were Caroline Thompson of Benton, sister of the groom; Molly Chaffee of Austin, Texas, cousin of the bride; and Drs. Sarah Beckwith, Brittany Flippo and Brooke Kamath, all of Little Rock. They wore eucalyptus-colored chiffon gowns with V-necklines and full skirts.

Conley Hurst of Little Rock was best man. Groomsmen, who also served as ushers, were Thomas Saccente of Fort Smith, brother of the bride; Cody Solomon of Brooklyn, N.Y.; Spencer Payne of Buffalo, N.Y.; Jamaal Jones and John Crum, both of Houston; and Wilson Miller of Dallas.

After the ceremony, a reception was held at the Country Club of Little Rock. Guest tables alternated towering arrangements of wedding flowers in crystal trumpet vases with low free-form garden style centerpieces set on crystal cake plates. Music was by The Big John Miller Band.

The groom graduated with honors and a bachelor's degree in history from Washington and Lee and is an operations and culinary director and senior vice president of Leaf and Grain in Houston.

After a honeymoon in San Francisco and Sonoma, Calif., the couple will make their home in Houston.