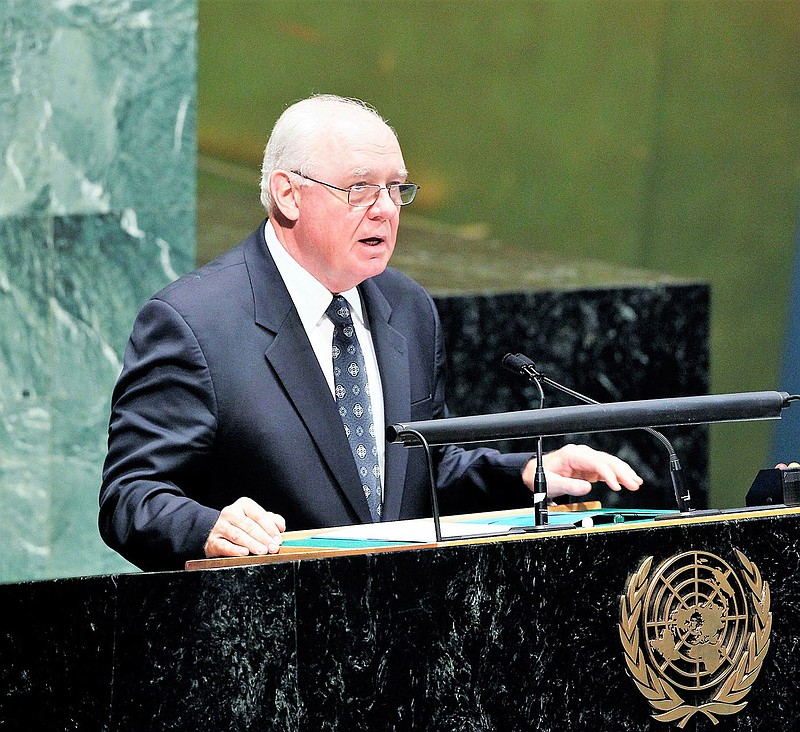 Ambassador James W. Pardew speaks in 2011 during a meeting at the 66th session of the U.N. General Assembly. (Courtesy of United Nations/JC McIlwaine)

He was 77. The cause of death was unavailable.

Pardew, who lived in Fairfax Station, Va., was born in Memphis and grew up in Jonesboro, graduating from Nettleton High School and Arkansas State University.

After graduation, he spent 28 years as a military intelligence officer, achieving the rank of colonel.

In 1997, President Bill Clinton, a Democrat, named Pardew as U.S. representative for military stabilization in the Balkans with the rank of ambassador at the State Department.

President George W. Bush, a Republican, appointed Pardew the U.S ambassador to Bulgaria in 2002. Pardew served in that role until 2005.

[Video not showing up above? Click here to watch » https://www.youtube.com/watch?v=1E12EiPB_Lk]

Pardew was the U.S. negotiator of the Framework Agreement in Macedonia in 2001 and served as deputy special adviser to the president and secretary of state for democracy in the Balkans during the conflict in Kosovo and subsequent peace implementation from 1999-2001. He also directed the Military Train and Equip Program for Bosnia from 1996-99; and represented the Secretary of Defense on the U.S. negotiating team on the Dayton Peace Agreement ending the war in Bosnia, according to his biography with the State Department.

Modern art from Bulgaria is a central element of the collection, which also includes art from central Europe, Asia and Islamic countries where they lived, traveled and served.

"Ambassador Pardew believed 'societies around the world produce art to reflect their history, their culture and to interpret the life of their area and time," Garry Holstein, director of Bradbury Art Museum, said in an ASU news release about the gallery being named after the Pardews.

In February 2018, Pardew spoke as part of the ASU Lecture-Concert Series after publication of his book, "Peacemakers: American Leadership and the End of Genocide in the Balkans."

He also spoke at the University of Arkansas Clinton School of Public Service lecture series in Little Rock in 2018.

Pardew was a prolific writer. He wrote several op-ed pieces that were published in the Arkansas Democrat-Gazette, The Washington Post and other publications over the years.