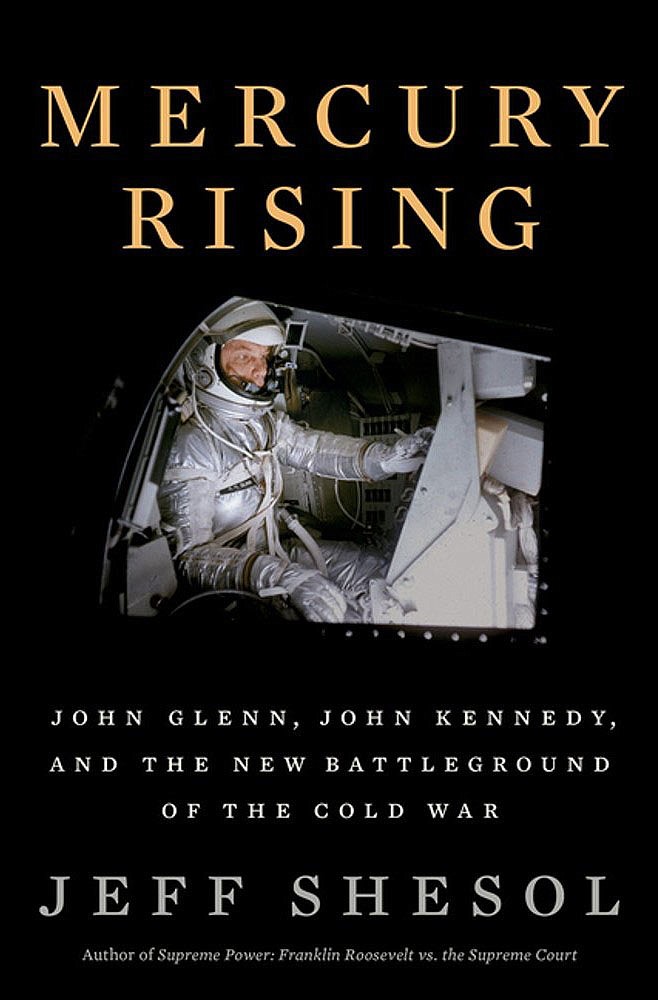 When I was an undergraduate at Ohio State in the early 1980s, I would often see John Glenn on campus, grabbing a tray and dining with the students in the cafeteria instead of hobnobbing at the Faculty Club. Even though he was a second-term U.S. senator at the time and would soon announce a presidential run, that never seemed to interest the undergrads, including me, who peppered him with questions over lunch. Instead, all they wanted to hear about was Feb. 20, 1962 -- the day Glenn became the first American to orbit Earth.

Today, when everyone knows that Jeff Bezos and Elon Musk are financing private space missions, but few can name any of the more than 200 astronauts who have lived on the International Space Station, it can be hard to explain the excitement and awe that 1962 mission aroused in Americans of all stripes, as well as people the world over. It seems like a story from a simpler and altogether less-jaded time -- a time Jeff Shesol captures in "Mercury Rising," which brings Glenn's story alive again with both nostalgia and a riveting, fast-paced narrative that has "movie" written all over it.

Born on July 18, 1921, in Cambridge, Ohio, Glenn grew up in nearby New Concord and flew in his first airplane with his father when he was only 8. Even as a child, he was a straight arrow with a sense of duty, honor and country, and he carried that Boy Scout quality into adulthood. After the Japanese attack on Pearl Harbor launched America into World War II, the 20-year-old Glenn dropped out of Muskingum College and enlisted in the U.S. Army Air Corps, eager to defend democracy against global fascism. Driven to succeed, he rose quickly through flight training courses, and his prowess soon earned him a transfer to the Marine Corps as a second lieutenant. He was a deadly dogfighter by the time he married his childhood sweetheart, Annie Castor, in 1943, and he soon proved himself flying 57 combat missions around the Marshall Islands.

According to Shesol, it was in the South Pacific that Glenn first experienced "the thrill of excelling at something dangerous and of real consequence," as well as the "absolute confidence ... that makes a fighter pilot believe that there actually is not another pilot and plane that can whip him in all the world." Maintaining his chops after the war, Glenn flew patrol missions and served as a flight instructor before flying 63 combat missions in the Korean War, often bringing his plane back to base riddled with bullet holes. Boston Red Sox slugger and future legend Ted Williams was his wingman for a spell and was awed by Glenn's coolness under pressure, calling him "the bravest SOB I ever met." After Korea, Glenn put that bravery to good use, becoming one of the top American test pilots of the 1950s.

Shesol does a marvelous job of documenting Glenn's steady rise, which in July 1957 brought him fame as the pilot of the first-ever supersonic transcontinental flight, jetting from California to New York in a record time of three hours, 23 minutes and 8.3 seconds. When the Soviet Union launched the satellite Sputnik 1 three months later, kicking off the space race with the United States, there was hardly an American alive better prepared to join the new NASA space agency and its Project Mercury, which would seek to launch men into orbit and bring them safely back to Earth. Earnest, straightforward, physically fit and with an exemplary record, Glenn ultimately beat out more than 100 other pilots to become one of America's first astronauts, along with Scott Carpenter, Gus Grissom, Alan Shepard, Deke Slayton, Wally Schirra and Gordon Cooper.

While the "Mercury Seven" trained, the politics of the space race heated up as the Soviet Union appeared poised to beat America for a second time by putting the first man in space -- a feat it accomplished on April 12, 1961, when cosmonaut Yuri Gagarin flew a single orbit around Earth in Vostok 1. Less than a month later, the first Mercury mission launched with Shepard becoming the first American in space, though on a suborbital trajectory. Two months later, Grissom piloted a similar follow-up mission. And then it was Glenn's turn.

From the moments leading up to the Atlas rocket's launch to the drama that developed around the Friendship 7 capsule's loose heat shield, equipment malfunctions and hazardous reentry, Shesol's descriptions are downright harrowing. But it's his deployment of Glenn's reflective letter to his young children, Dave and Lyn -- written before takeoff, when his return wasn't at all assured -- that becomes the centerpiece of the saga. "Courage is only present when there is also fear," Glenn wrote. "In a dangerous situation we all have fear. It would be foolish to not be afraid. I have never gone into combat, for instance, without being afraid, but the important thing is what we do about being afraid. ... I can tell you that I will be afraid when the booster is getting ready to fire because I know there are dangers involved much greater than normally experienced. What I do at that time is the important thing. ... Human progress has never been fostered by the cowards who have let fear rule their lives."

With a sense of history becoming of a former White House speechwriter for Bill Clinton and an author of fine books on Franklin Roosevelt and Lyndon Johnson, Shesol does an excellent job of embedding Glenn's story into the wider Cold War context. Following his flight, Glenn became a national hero, visiting President John Kennedy at the White House and receiving a ticker-tape parade in New York, while the Friendship 7 capsule took on its own life as a goodwill artifact, traveling the world as proof-positive of U.S. technological mastery and a crucial stepping stone on America's journey to the moon.

By contrast, Shesol breezes through Glenn's Senate career and 1984 presidential campaign, and completely avoids mention of the Keating Five Scandal, in which Glenn and four other senators were accused of helping bank chairman Charles Keating resist U.S. regulators in return for large contributions. (Glenn was ultimately cleared.) The narrative takes orbit again when Shesol re-creates Glenn's 1998 return to space as a crewman on the space shuttle Discovery's nine-day STS-95 mission -- which made him, at age 77, the oldest human ever in space, a record that still stands.

While "Mercury Rising" captures the sense of energy and possibility in America's Cold War space program, and ably explores what the New York Times once called Glenn's "prickly sense of integrity," there's still a need for a definitive biography of America's first true space hero. Luckily for history's sake, Glenn was something of a pack rat, saving everything from elementary school drawings to class papers to his post-Mercury notes about space travel -- all of it housed at the John Glenn Archives at Ohio State. Mining that archive for "Mercury Rising," Shesol manages to extract the spirit of the man who took America for its first ride around Earth and then, 36 years later, looked down again from orbit and said, "Zero G, and I feel fine."

Douglas Brinkley is the Katherine Tsanoff Brown chair in humanities and professor of history at Rice University and the author of "American Moonshot: John F. Kennedy and the Great Space Race."