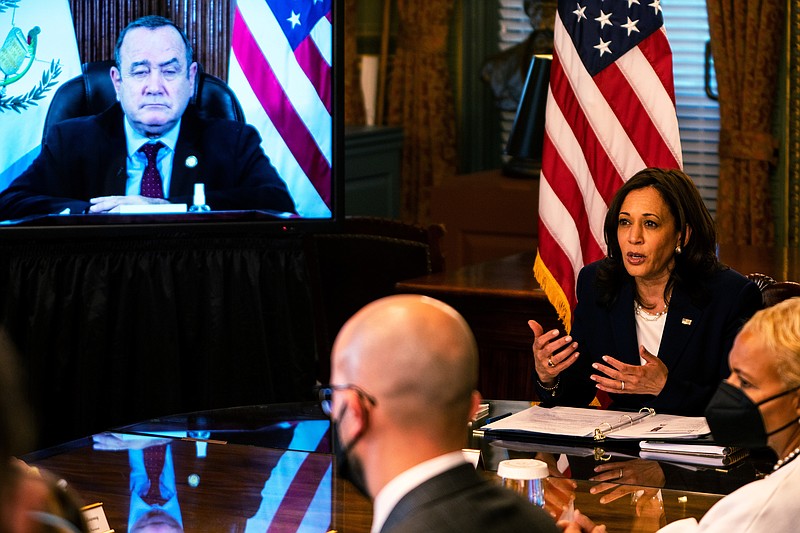 WASHINGTON -- Vice President Kamala Harris is to depart today for Guatemala and Mexico, a two-day trip crafted to highlight the Biden administration's efforts to remedy what it calls the "root causes" of mass migration from Central America to the United States.

Traveling abroad for her first time as vice president, Harris will arrive in Guatemala this evening bearing gifts: pledges for hundreds of thousands of coronavirus vaccine doses, $310 million in regional humanitarian aid and a $4 billion long-term plan to boost development and security across Central America.

Those sweeteners may be used to offset what are expected to be tougher messages about battling corruption and upholding democratic norms.

In Mexico, where Harris will arrive Monday night, she will meet with President Andres Manuel Lopez Obrador to discuss expanding immigration enforcement cooperation with the United States as part of a regional approach to managing migration, administration officials say.

White House officials have sought to lower expectations that Harris' efforts will produce short-term results at the U.S. southern border. Since President Joe Biden took office, the number of migrants taken into custody by U.S. agents per month has skyrocketed to the highest levels in 20 years, with record numbers of teenagers and children crossing without parents.

"There needs to be political will on the part of the government, but we also are looking to partner with multilateral organizations, the private sector and other entities to really build a comprehensive approach that addresses the many root causes of migration in the region," Alfaqih told reporters in advance of the trip.

In March, Biden directed Harris to address the underlying causes of migration -- including poverty, violence, climate change and government corruption.

It marked the first major issue in her portfolio, which this month expanded to include spearheading the administration's efforts to counteract Republican efforts to enact voting restrictions -- assignments that place her in the middle of a pitched partisan battle being fought at multiple levels of government.

On immigration, the administration has emphasized that Harris' role would be diplomatic, not managerial, and similar to the one played by Biden when he was Barack Obama's vice president.

Harris has relatively little foreign policy experience, though the administration has said she tackled some immigration issues as the California attorney general and a U.S. senator. Administration officials, from the president down, have said she is not responsible for dealing with the more politically fraught elements of U.S. border enforcement.

More than 16,000 teenagers and children remain in U.S. government shelters, down from more than 21,000 in March, when the Biden administration was caught off-guard and overcrowding in border tents reached crisis levels. U.S. Customs and Border Protection data show that more unaccompanied minors have arrived from Guatemala than any other nation.

Republicans, including several with presidential ambitions, have rushed to connect Harris to the surge at the border. Some have taken to calling her Biden's "border czar."