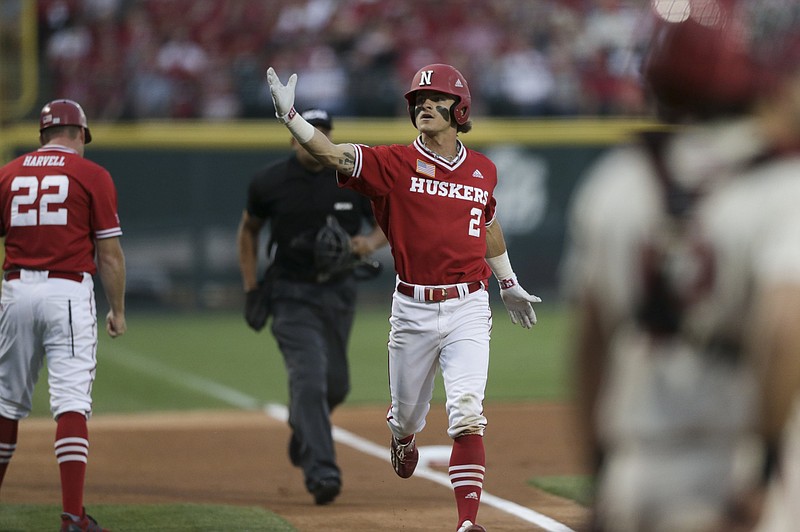 Nebraska's Jaxon Hallmark (2) scores against Arkansas on Sunday, June 6, 2021 during the first inning in the third game of the NCAA Fayetteville Regional at Baum-Walker Stadium in Fayetteville. (NWA Democrat-Gazette/Charlie Kaijo)

FAYETTEVILLE — Nebraska won twice Sunday, including a 5-3 victory over Arkansas, to force a winner-take-all game against the Razorbacks at the NCAA Fayetteville Regional.

The teams are scheduled to play again Monday at 6 p.m.

Nebraska relief pitcher Spencer Schwellenbach shut down Arkansas for 4 2/3 innings to lead the Cornhuskers to a 5-3 win over the top-ranked Razorbacks on Sunday night. Schwellenbach allowed one hit during his 65-pitch outing and worked around two walks in the ninth inning.

Christian Franklin drew a leadoff walk and Cullen Smith walked with one out, but Casey Opitz struck out and Jalen Battles popped up to the first baseman with the tying run on base.

Schwellenbach, the Big Ten player of the year who is also Nebraska’s starting shortstop, had a game-tying single during a three-run fifth inning that gave the Huskers (34-13) the lead. Nebraska went ahead 5-3 on Griffin Everitt’s two-out single.

All five Nebraska runs came against Arkansas starter Lael Lockhart, who was taken out of the game after 4 1/3 innings. Lockhart allowed 8 hits, 4 earned runs and struck out 5.

Ryan Costeiu replaced Lockhart after Schwellenbach’s single on a 1-2 pitch with one out. Costeiu, who inherited runners in scoring position, struck out Luke Roskam for the second out of the inning but gave up the go-ahead single to Everitt.

Arkansas barely threatened after that point against Schwellenbach, who retired seven in a row after Robert Moore’s two-out single in the sixth. Moore was the Razorbacks’ only base runner against the right hander until the two ninth-inning walks.

Schwellenbach entered the game in a high-stakes situation in the fifth inning. Jalen Battles walked and went to third base on Matt Goodheart’s single against Nebraska starter Kyle Perry.

Schwellenbach struck out Cayden Wallace for the second out and Charlie Welch flied out to end the inning.

Arkansas went ahead 3-1 in the third inning. Wallace’s one-out single scored Battles to tie the game, and Wallace and Goodheart scored on a combination wild pitch by Perry and throwing error by Everitt, the Nebraska catcher.

Perry gave up 3 runs (2 earned) on 3 hits and 3 walks in 4 1/3 innings. The left hander had pitched just six innings prior to Sunday’s game.

The Huskers went ahead 1-0 in the first inning when Jaxon Hallmark homered with one out. Hallmark added a sacrifice fly in the bottom of the third to pull Nebraska within 3-2, but the Huskers had a pair of base-running mistakes that potentially cost them a bigger inning.

Nebraska was thrown out four times on the bases, including twice when Mojo Hagge flied out to begin inning-ending double plays. Wallace, the left fielder, threw out Everitt at second base in the second inning, and the center fielder Franklin threw out Brice Matthews at first base in the eighth.

The Huskers defeated NJIT 18-4 in an elimination game Sunday afternoon. Nebraska was sent to the loser’s bracket with a 5-1 loss to Arkansas on Saturday.