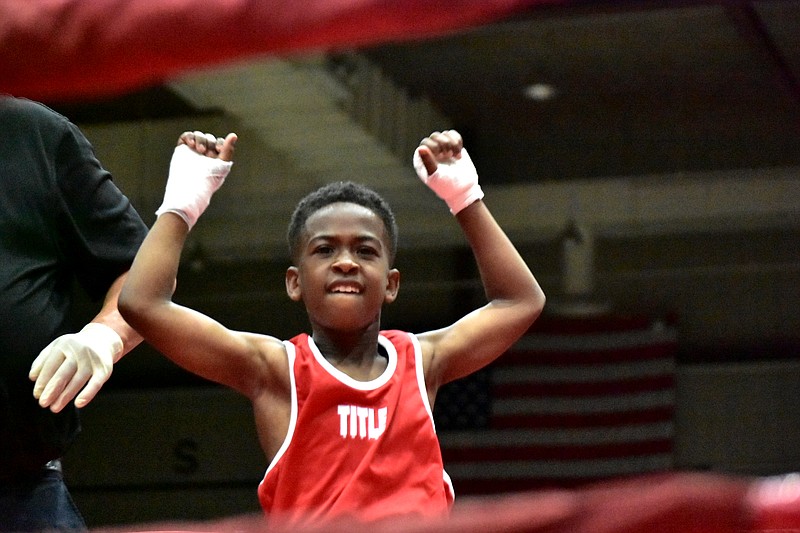 Kaden Crutchfield of Gloves Not Guns Boxing Club reacts to being announced the winner of a 60-pound fight over George Hollis of Augusta in the Arkansas State Silver Gloves on Saturday, June 5, 2021, at the Pine Bluff Convention Center. (Pine Bluff Commercial/I.C. Murrell)

The path to an Arkansas State Silver Gloves championship took as long as two 9-minute bouts for a couple of fighters, but for some, no punches were needed.

Those that earned automatic berths into the Region 6 tournament as unopposed fighters still put in some work at the Pine Bluff Convention Center, making up the majority of Saturday's fight card.

Dkeylen White, 14, boxing for Pine Bluff's Gloves Not Guns club, needed only 10 seconds of work -- if that long -- to win his 132-pound non-tournament bout against Maxwell Dollarhyde of the Defenders. The referee stopped the fight due to injury.

"They told me to stay on him and keep your guard up and move out the way," White said. "That's what I did when coach told me in the corner -- just stay busy, hit and get out the way."

White stayed busy, albeit in a short amount of time, with a furious combination highlighted by a hard right jab.

"That's my first hit," White said. "I just moved, then I just left my back hand where it was."

White tasted victory in the first Silver Gloves tournament to be held in Pine Bluff after a decades-long run in North Little Rock. The event drew a bigger crowd Friday evening than on Saturday afternoon, when about 200 sat around the ring, said Albert Brewer, Gloves Not Guns organizer and coach.

Gloves Not Guns will also host the Region 6 Silver Gloves from July 22-24.

The state Silver Gloves tournament was postponed from December due to the coronavirus pandemic, meaning Springdale's Eric Montes had to wait more than a year to repeat as a champion.

Boxing unattached, Montes, 15, won a unanimous decision over Brayden Faulkner of the Defenders club in the 15- to 16-year-old, 165-pound class. He was awarded the Ray Rogers Award as the most outstanding fighter in the state Silver Gloves.

"It feels very special because I've been winning for two years in a row," Montes said. "It's a bigger step for me. Now, I'm going to go to regionals and win it if I can."

The level of competition is tough and requires much discipline, Montes said. He also had to overcome a long delay in training for another gold medal.

"It was hard at first because of covid," he said. "I wasn't able to train, but I lost weight to be ready for this tournament."

Montes said he cut about 15 pounds to make weight. He made the work count, taking home a nearly 5-foot trophy.

Awards like that, Brewer said, are "what makes them come" to such tournaments. 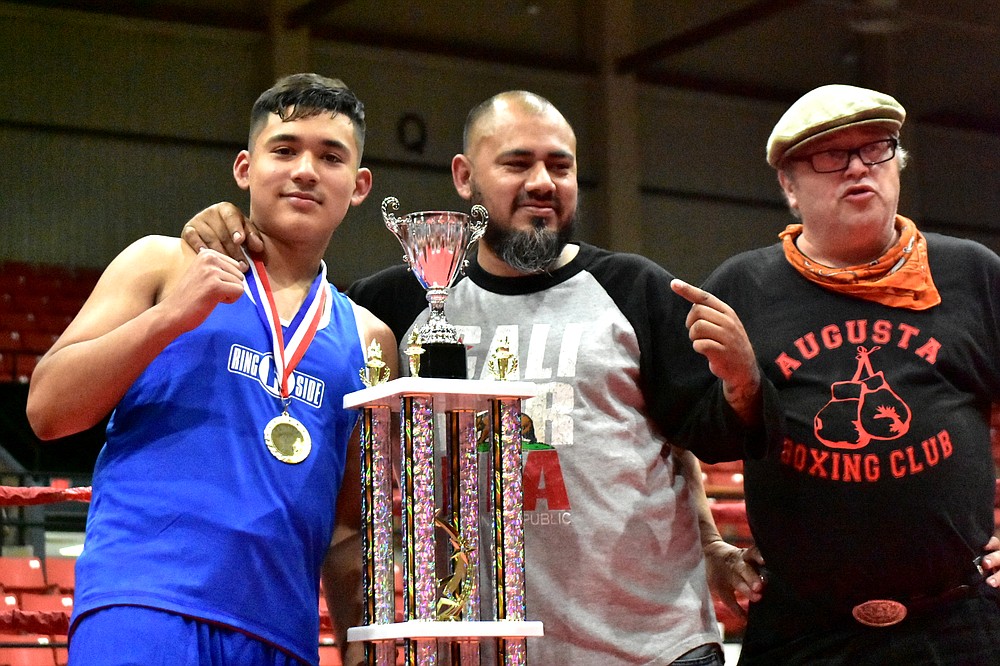 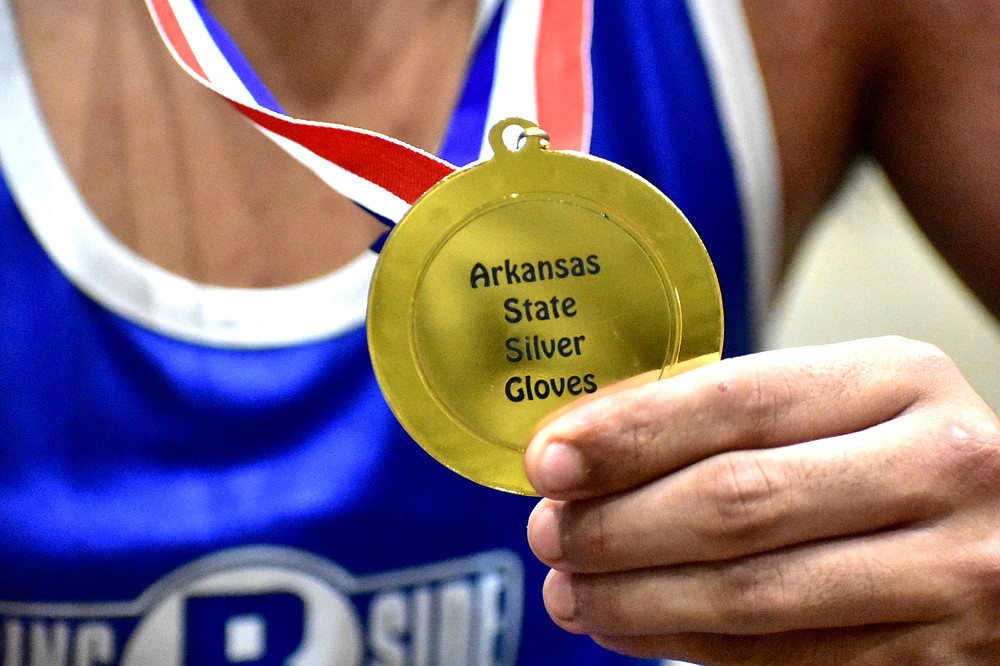 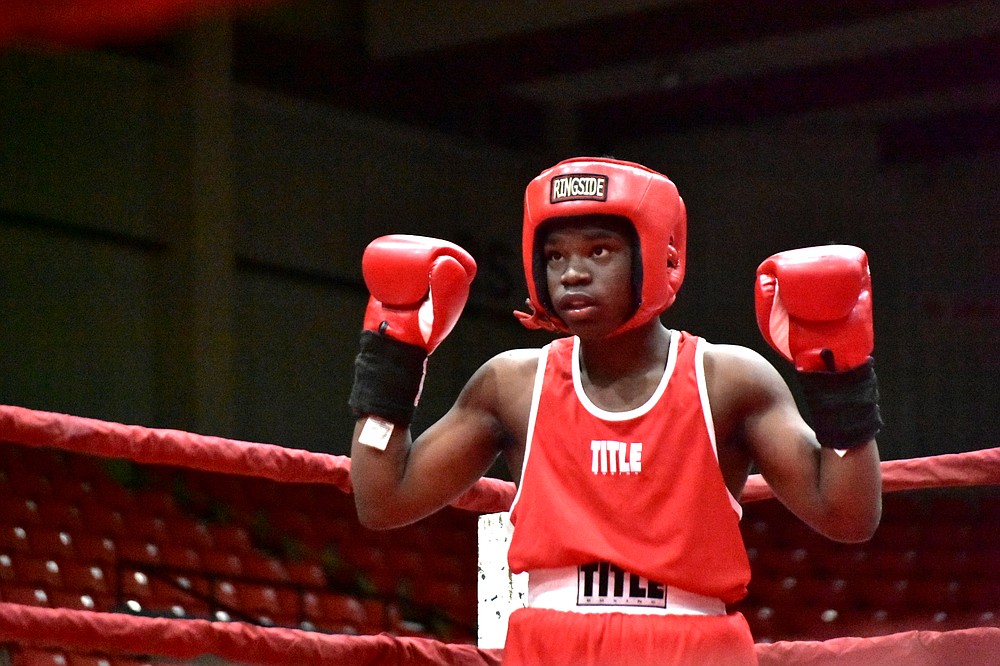 Dkeylen White of Gloves Not Guns retreats to a corner after stopping Maxwell Dollarhyde of the Defenders Boxing Club in about 10 seconds during a fight in the Arkansas State Silver Gloves on Saturday, June 5, 2021, at the Pine Bluff Convention Center. (Pine Bluff Commercial/I.C. Murrell)
ADVERTISEMENT