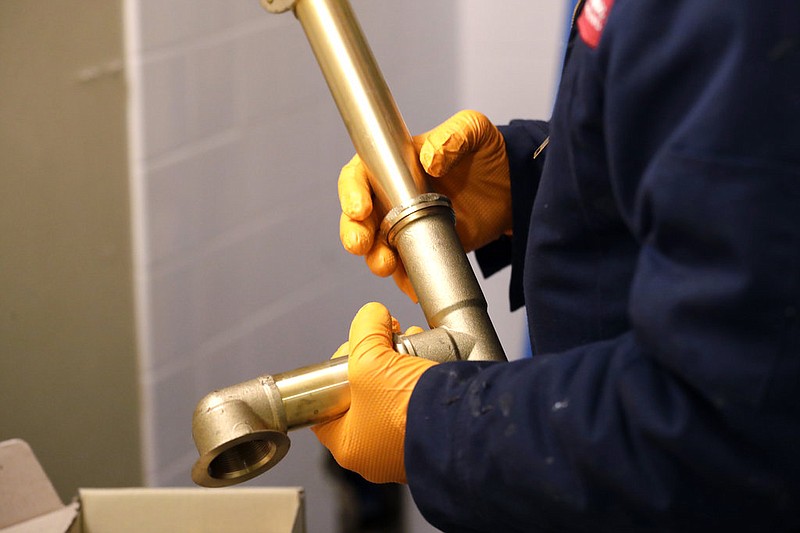 A plumber prepares tub drains during a replacement of plumbing in an older apartment building in this Dec. 13, 2018, file photo. (AP/Elaine Thompson)

Chandra Profit had to move four times within the same North Little Rock public housing complex in a year's time, and she is not the only resident in that situation, she said.

"We've signed so many leases [that] we don't know who's the manager or what lease we're signing," she said.

The moves were necessary so the Heritage House building at the Hickory View Apartments could be renovated, said Belinda Snow, executive director of the North Little Rock Housing Authority.

The North Little Rock authority is one of the many public housing agencies in Arkansas and across the country participating in the Rental Assistance Demonstration program, administered by the U.S. Department of Housing and Urban Development, to secure funding for maintenance and renovations.

Former President Barack Obama's administration created the Rental Assistance Demonstration program in 2012 to give the public housing sector a new funding source after decades of underfunding.

Under the program, private companies take over the lease of the building, though housing authorities still own the land. Meanwhile, tenants must sign new leases with the new owners.

This private ownership allows housing authorities to enter into contracts with banks and finance companies -- whether through loans, tax credits, grants or a combination -- to receive the millions of dollars for plumbing, flooring, roofing, electrical and other repairs and maintenance.

While these changes are necessary to make the buildings safer and more livable, both tenants and housing attorneys said introducing private entities into the public housing system can create a disconnect between tenants and the housing authorities.

"People are afraid because they don't know what their rights are, and suddenly there's a new owner and new leases and people can get run over in that process," said Michael Kane, executive director of the National Alliance of HUD Tenants. "That certainly is a common pattern around the country."

Snow said that not every document that tenants like Profit had to sign upon moving were new leases. If tenants moved from a one-bedroom apartment to a two-bedroom, for example, they did have to sign a new lease, but otherwise, they simply had to sign their Section 8 contract so the housing authority could keep accurate records of who lived where and charge the correct rent.

There are sometimes "significant changes" when a private entity assumes ownership of a formerly public program, especially because private entities have a profit incentive, said Deborah Thrope, the deputy director of the National Housing Law Project.

"A lot can change for the tenant, but it really depends on the individual deal and whether the tenants are organized or educated [about their new leases]," she said.

In 2016, the Department of Housing and Urban Development estimated that $26 billion was needed to repair and restore the nation's 1.1 million public housing units, with each subsequent year accruing an additional $3.4 billion in unmet capital needs.

North Little Rock had up to $90 million in needed repairs in 2016, Snow said at the time. The agency's buildings dated as far back as 1942, and the $1 million annual allowance from HUD for maintenance and renovations wasn't enough, she said.

Snow and other public housing directors said the Rental Assistance Demonstration program was the only way to get enough money for the projects. The North Little Rock Housing Authority once tried to focus its renovation efforts on one specific building, Willow House, for an entire fiscal year, but that turned out not to be financially feasible, Snow said.

"It still didn't make a dent in what needed to be done in that development, and when you do that, you minimize the ability to respond when a major issue happens at another development," she said.

Both companies hired subcontractors for management and construction work.

Roughly 700 units in all three Little Rock towers have been through the Rental Assistance Demonstration program, said Kenyon Lowe, chairman of the Metropolitan Housing Alliance board of commissioners. The $70 million project made every unit accessible for people with disabilities, he said.

The Little Rock agency also plans to convert Madison Heights, Sunset Terrace and the Homes at Granite Mountain, at a cost between $75 million and $80 million, Lowe said. The agency converted Cumberland Manor and Metropolitan Village in July 2017, and since both were built in 2009, no repairs were necessary.

The federal department allows housing agencies to combine the vouchers administered by the rental assistance program with those administered by Section 18, which allows for demolition of aged buildings. Three North Little Rock buildings, including Heritage House where Profit lives, have undergone this combined conversion project, Snow said.

Lowe said the Metropolitan Housing Authority did not implement Section 18.

"We have no need to demolish [because] none of our housing stock is that old or in that bad of shape," he said.

Additionally, both the Little Rock and North Little Rock agencies offer tenants choice mobility vouchers, which allow 25% of a converted building's Section 8 tenants to move to another building after a year if they so choose.

However, it's not clear how many tenants know they could do this under the Rental Assistance Demonstration program, Thrope said.

"How many tenants are aware of and are choosing this option is a big question," she said. "There have been some studies around choice mobility, but not many. It's a really important right that we hope tenants are educated about and housing authorities are aware of."

Before she took her current position, Bradley worked closely with the agency's relocation office to make sure tenants knew where they would be able to move while renovations took place, she said.

"When it was time for them to come back, our tenants got the first option if they wanted to go back to their unit or go somewhere else," she said. "I think the relocation of all the tenants went really smoothly."

Lowe and Snow both said their respective agencies made the same concerted efforts to keep tenants informed of impending changes from the program.

"I believe the residents got tired of seeing us," Snow said. "It got to the point where we'd go out and talk about this, and they'd say, 'Y'all have been talking about it for two or three years, when are you going to start working on it?'"

However, Profit and another Heritage House resident, who requested anonymity for religious reasons, said they and other tenants were in the dark as to what was changing in their apartment complex. After two years under new management, tenants still have trouble reaching anyone who can addresses complaints or questions, Profit said.

"They always say they're going to try to make it better, but lately we haven't been able to get in touch with anybody," she said.

Kane said efforts to involve tenants in the program typically have been "ham-handed," especially if tenants are not organized. Tenants of federally subsidized housing have the right to form resident councils in their buildings and present their needs and requests to housing agencies and management companies.

The Hickory View buildings used to have a resident council, Profit said, but it has not been active since the change in management, largely because the council's previous leader died and no one stepped into his role.

Profit said that each time she moved to another unit, she did so under threat of police intervention. Snow couldn't be reached for additional comment on Saturday.

Profit and the other Heritage House resident both said the conditions of the building are poor despite the ongoing renovations.

"If you ask to get something fixed, they don't fix it," the other resident said. "You can't sit down in the shower anymore. They took the shower bars out. Some elderly people are scared to get in the shower because they're scared they're going to fall."

BGC Advantage disputed the claim that the work done so far is not sufficient.

"The major renovation for Hickory View included a complete gut and renovation of the bathrooms, including new tile surround and walk-in showers," BGC CEO Holly Knight said in a statement. "New energy-efficient lighting was installed throughout the units. Finishes include new cabinets, luxury vinyl flooring, kitchen fixtures, and energy efficient appliances. Each apartment is equipped with its own climate control air conditioning and heat."

While housing agencies have financially benefited from the program, tenants' problems with the program are no surprise to their advocates, Kane said.

"The struggle for tenants is to make sure their interests are protected that they're not displaced, that the management is responsive and not oppressive, that their right to organize independently is respected, [and that] they can do that without harassment," Kane said.