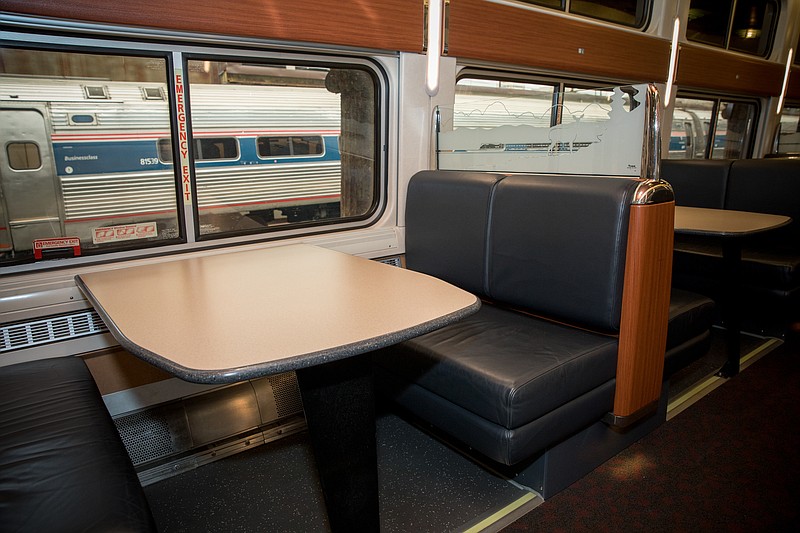 The dining car of a long-distance Amtrak train on display at Union Station in 2019. MUST CREDIT: Photo for The Washington Post by Evelyn Hockstein

Amtrak is bringing back the traditional dining experience to some long-distance trains this month, promising an improved experience with made-to-order plates.

The passenger railroad last year switched to prepackaged meals on long-haul routes that travel west of Chicago and New Orleans amid low ridership and efforts to keep passenger and employee interactions at a minimum during the coronavirus pandemic. Amtrak said it has no plans to return the white-tablecloth service to the one-night routes east of the Mississippi River where freshly prepared meals were replaced with boxed options before the pandemic.

The company's decision in fall 2019 to end the traditional dining car on some trains ignited a firestorm of complaints from railroad passengers, aficionados and even some members of Congress. Rep. Steve Cohen, D-Tenn., called it "shortsighted and foolish" and compared the railroad's transition to more "flexible" dining options to airlines taking amenities away from passengers.

While the company has no intention of bringing back the dining service to routes in the eastern United States, it is prioritizing the option on longer routes across the western part of the country, most of which are two-night routes, said Larry Chestler, Amtrak's vice president of long-distance services.

"We are continuing to evaluate our offering and looking at some alternatives," he said of dining options on eastern routes. "But our intention, at least at this time, is not to bring this traditional dining approach to the eastern trains."

The return of the traditional dining car to western U.S. lines, announced recently, coincides with the restoration of daily operations on a dozen routes that had been operating three times a week since October as a result of cost-saving measures during the pandemic.

An infusion of $1.7 billion in federal relief aid allowed Amtrak to bring back daily service to eight routes last month. The final four routes will be back to daily service in the coming days, officials said.

Train advocates and passengers have pleaded with Amtrak to bring back the traditional dining car across the 15-route network of overnight trains, saying it is iconic to the American rail experience. In switching to boxed meals on eastern U.S. trains, Amtrak said it was reinventing its dining service and saving $2 million a year.

The company also attributed the change to a desire to lure a generation of new riders -- younger passengers not particularly keen on breaking bread with strangers at a communal table. Amtrak says it hopes the reintroduction of an improved dining service on those six routes will help bring back passengers.

Chestler said bookings are up for summer travel, although demand is far short of normal. Ridership is approaching about half of pre-pandemic numbers.

The passenger railroad also is bringing back ceramic dishware, glassware and metal cutlery. Several years ago, the company replaced the fancy china with disposable plastic plates and bowls.

Amtrak said coronavirus protocols will continue in food and beverage service. Diners will be required to wear masks except while eating or drinking, and they can opt for room service.

Passengers in roomettes and bedrooms, considered premium services, will have free access to traditional dining. Coach riders will continue to have access to more casual options in the cafe car and they eventually will have the option to purchase the traditional dining meals. Officials said changes to the menu are coming this summer.

A new menu has fewer dinner entree choices but adds an appetizer course. The new made-to-order menu does not include Amtrak's popular crab cake and steak dinner, but it brings back French toast and Black Angus steak served with vegetables and a baked potato.

Along the East Coast, only the auto train that travels from Lorton, Va. to Sanford, Fla. has retained full dining service for sleeper-car passengers. The train didn't end that service during the pandemic because, officials said, ridership and room occupancy remained strong.