Wayne Brady opens up his life on jazz album 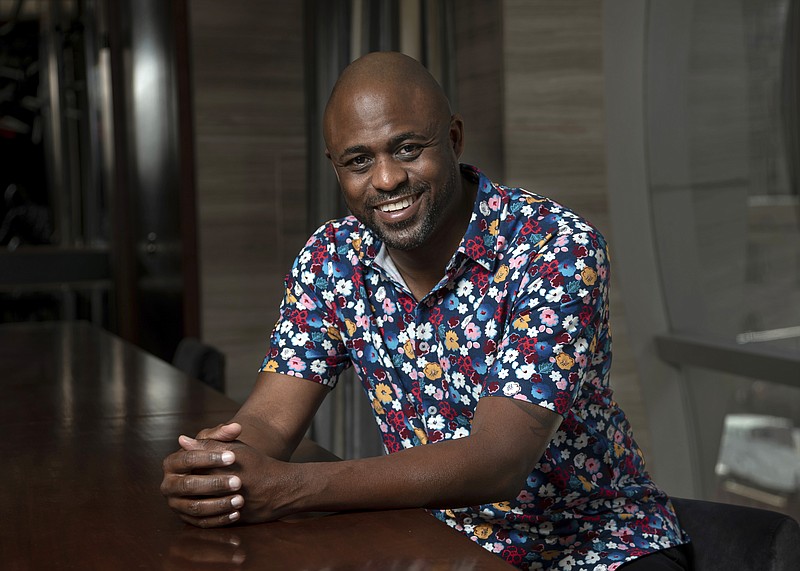 Actor, comedian and singer Wayne Brady shares a bit of his painful past on a spoken-word track — “A Piece by the Angriest Black Man in America (or, How I Learned to Forgive Myself for Being a Black Man in America).” The track appears on “Transformation: Personal Stories of Change, Acceptance, and Evolution,” the new spoken-word jazz album by actress Glenn Close with Grammy-winning jazz musician Ted Nash. (Invision/AP/Christopher Smith)

For years, Wayne Brady had been working on a one-man show about being a young Black man growing up in Orlando, Fla., but he could never finish the project.

That's until acclaimed actress Glenn Close asked him to participate in her spoken-word jazz album.

"To be honest with you, the reason it took me a couple of years was because it was so painful," Brady recalled. "Every time I'd go to it, I would start a draft and it got a little too real. I felt myself wanting to do the thing that you can do — whether you're talking to a group of friends or whether you're onstage — 'I'm going to now make this funny and I'm going to deflect.' Or 'I'll sidetrack or I'll do something that takes away the weight because I don't want to remember this.'

That's when the actor-comedian-singer crafted "A Piece by the Angriest Black Man in America (or, How I Learned to Forgive Myself for Being a Black Man in America)." It appears on "Transformation: Personal Stories of Change, Acceptance, and Evolution," Close's new album, released in May.

"My heart was going a mile a minute ... It's really the first time that people will be hearing this piece of Wayne, this struggle of Wayne, that some people know and some people don't," said Brady, who recorded the track live in front of an audience at New York's Jazz at Lincoln Center.

"What I'm trying to do is move the needle a little bit because there is someone who may sit down and know Wayne Brady from 'Whose Line Is It Anyway?' or looked at 'Let's Make a Deal' or [say] 'I loved him on that sitcom or I loved him on this' — they don't know this story of pain is lurking there because I don't share that. Well, I have come to share that to let you know maybe you're skewed to what Black is or what Black isn't."

On "Angriest Black Man in America," Brady tells his Black experience, beginning with a lighter-skinned Black person, Tessa Grady, saying to him during his young years: "You's a Black, ugly mother- [expletive]."

THE STING OF 'COLORISM'

"It was just a fact. There was Black and then there was Blaaaaaaaaack," Brady reads on the spoken word track. "I fit into the latter, dark as Black matter and hearing you pair 'Black' and 'ugly' together in that manner made me feel like my type of Black life didn't matter."

On the poignant, eight- minute song, the performer continues to break down his life's experiences, touching on topics like his hair and not wanting to play outside in the sun because he didn't want to get darker and being called "one of the good ones" by white people.

Close said she "was really moved by what Wayne Brady wrote. Very unexpected." She invited Brady to perform on two more songs on her album, a collaborative project with Grammy-winning jazz musician and Jazz at Lincoln Center Orchestra player Ted Nash.

"I had tears in my eyes," Nash said after reading Brady's original piece. "I had tears in my eyes for several reasons — first of all, that he was willing to share this with us and allow us to have him participate." Nash added that one of his band players, who is Black, "came up to Wayne after we did one of the performances and he says, 'Look, I have to just tell you that you just said the same thing that I have felt for so long about how I feel about myself.'"

Nash's assessment: "You don't sometimes realize how people interpret what's put to them. And that was deep."

Brady said he forgives Tessa Grady for the ill words she spoke as a child and he plans to reach out to her since his song is out and widely available. He adds that he didn't write the poem to "vilify her."

"I just use Tessa as the example of one of those self-codifying moments that form who you are as a person. I had to deal with that person all my life up until I realized I needed to forgive myself for whatever — for how Black that I felt I was, or how not Black that I felt I was," he continued. "Those things were holding me back. Especially at a point in our country's development where race has always been on the table and it's always been a fight, but now voices are demanding to be heard. I realized I needed to add my voice to that."

Brady, 48, has won five Emmys for his roles across various TV shows, appeared on Broadway stages and even earned a Grammy nomination for his cover of Sam Cooke's "A Change Is Gonna Come." He said he has been working on new music and he wants to continue to be a voice for people who look like him, especially with the platform he has.

"By the time I started getting on, around the time of 'Whose Line,' I kind of fell into this narrative that was being written for me by some network people who didn't want to see Black either. They wanted an amiable, shiny, Black face that could connect with their viewers, but we don't necessarily have to talk about the Black experience. You're Black but we don't necessarily need all that 'rah rah' about it. Sure, and I was complicit because in my mind, I'm not going to talk about Blackness either, I'm going to ... show everybody how amazing I am. And if I do that because of the talent that I have, then that will change the conversation of race," he said. "It was very idealistic of me but super naive and the world doesn't work like that. If I would have used my platform even from the get-go, to be able to say, 'I sit in my Blackness, that's who I am and let's go,' that would have been a different thing.