Arkansas’ race to use coronavirus vaccines before expiration, explained 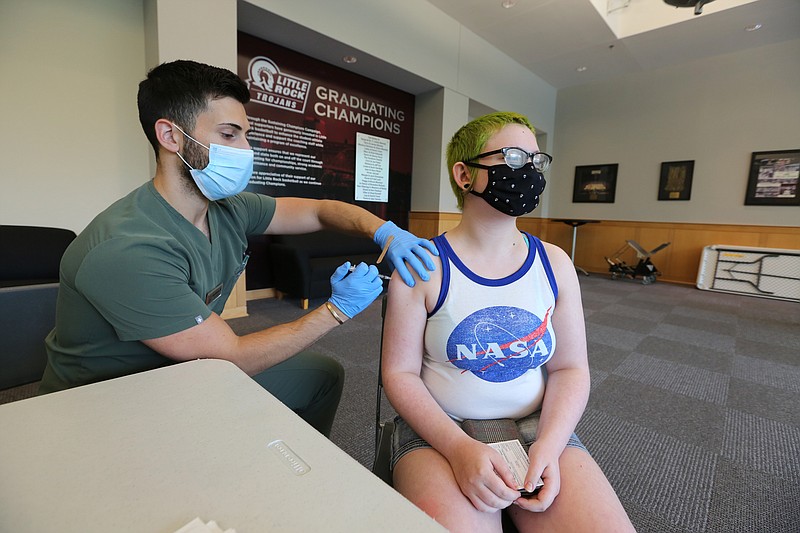 University of Arkansas at Little Rock junior Hailey Hudson of North Little Rock gets her first dose of the Pfizer vaccine from nurse Nick Kitchens during UALR's vaccine clinic put on by Don's Pharmacy on Wednesday, April 28, 2021, at the Jack Stephens Center in Little Rock. (Arkansas Democrat-Gazette/Thomas Metthe)

As demand for the coronavirus vaccine has continued to drop, the state is now in a race to use up nearly 60,000 doses of the single-shot Johnson & Johnson vaccine before they expire at the end of June.

How many doses has the state been administering?

Overall, the state is administering fewer and fewer doses. The average number of doses administered per day over a rolling seven-day period peaked at more than 23,000 in early April but was just 5,656 as of last week.

Looking specifically at the Johnson & Johnson vaccine, from May 1 to May 28, the state administered 11,150 doses, according to data from the U.S. Centers for Disease Control and Prevention. That works out to an average of fewer than 400 per day.

Using all 59,755 doses — about 85% of the state’s stockpile of the Johnson & Johnson vaccine — by their expiration dates this month would require a significant acceleration of vaccinations.

What is the state doing to avoid wasting doses?

The state began to reduce its ordering of new doses weeks ago to work its way through the existing stockpile.

State Epidemiologist Jennifer Dillaha said she expects Arkansas to be able to use most of the vaccine doses before they expire thanks to a system of moving doses around the state so the ones set to expire earlier get used first.

But the state still lost doses to expiration for the first time in May: 541 of Johnson & Johnson, 1,371 of Pfizer and 79 of Moderna.

Arkansas doesn't have any plans to send doses to other states, Dillaha said, because other states are largely also trying to use up stockpiles.

Are there concerns about more Pfizer and Moderna vaccines expiring?

There are zero Moderna doses in Arkansas’ stock set to expire in June.

As for Pfizer, although 13,445 doses in the state have expiration dates in June, there is less concern over those vaccines expiring in part because they are generally being administered at a faster rate.

Recently, an average of more than 4,500 Pfizer doses a day were administered, though that figure also includes doses administered through federal programs in Arkansas that do not help use up the state’s stockpile.

Read more about the effort to use doses before they expire from reporter Andy Davis, and check out our vaccine tracker, updated daily, to keep track of the pace of vaccinations in Arkansas.