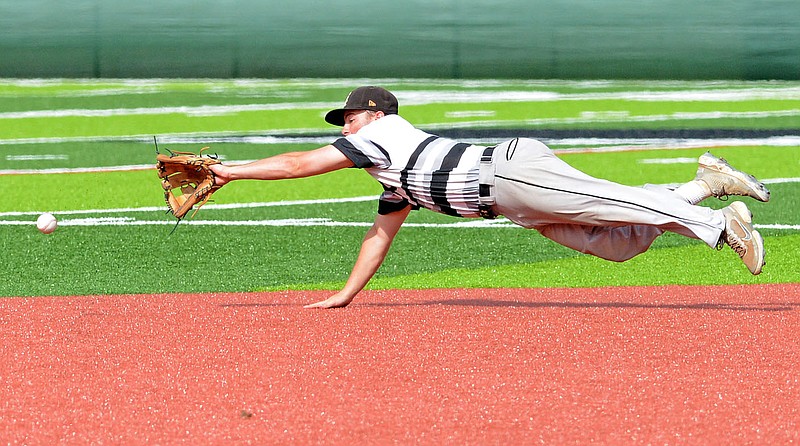 Bryant's Noah Davis dives for a ground ball hit just out of reach by Creighton Prep's Drew Jensen on Sunday, June 6, 2021 at Hunts Park in Fort Smith during the championship game in the Katzer tournament. (Special to NWA Democrat Gazette/Brian Sanderford)

FORT SMITH -- The seven-plus hour drive back home was made just a little bit sweeter for Creighton Prep (Neb.) with its performance on Sunday at Hunts Park.

Creighton finished off its run in the championship game of the Katzer American Legion baseball tournament with a 9-4 victory against the Bryant Black Sox. It used a six-run first inning and didn't look back after that.

"We loved our stay here," Creighton Prep coach Pat Mooney said. "They really took care of us here. It isn't a bad drive here. We can get here in a day. We played well and pitched well. I'm proud of the guys because they didn't get to travel last year with covid. This is all new to them."

First baseman Brok Laney got the offense kick-started in the bottom of the first with a big RBI double. Laney early in the plate appearance fouled a ball right off his foot and grimaced with a lot of pain. He'll gladly take the result he got though. He was able to hobble around the bases for his two-base hit.

"The pitcher was throwing all fastballs, so I was just sitting on one of those," Laney said. "He gave me one up and I was able to get a good swing on it for that double. I was in a lot of pain, but you have to fight through it."

Mooney had a good feeling with Laney at the plate with runners on second and third. He wasn't wrong either.

"He is one of our guys that graduated this year, so he has that experience," Mooney said. "He is a leader. He does a good job for us. We put him in that cleanup spot for a reason. He is steady for us."

Creighton finished the first inning with a seven-hit frame to take its 6-0 lead. After Laney's big hit, Andrew Butler had an RBI double, Zach Ryan had a two-run single and Kalen Piechota also had an RBI single. Twice during the inning Bryant lost two fly balls in the sun that help keep the inning going.

"It really helped jumping out to that lead," Mooney said. "It was good. We started smashing the ball after that first out. I was really happy to see us putting the ball in play early. We are running out of gas a little bit. This was our first trip of the year and was our fifth game of the tournament."

That was all the offense Creighton starter Ryan Bauer needed. He picked up the win by pitching 5 innings while allowing 3 hits, 2 runs and 5 walks with his 6 strikeouts. He didn't allow a hit until the fourth inning.

"We knew we had the arms to finish this off," Mooney said. "He was really good for us. It was nice to march him out there with as much talent has he has in game five. He got guys out early in innings. He battled through it. He is one of our bulldogs he goes right after the opposing team."

Bryant was able to put together a three-hit, two-run fourth inning to cut the deficit to 6-2. The Black Sox got an RBI triple from J.T. Parker then an RBI single from Lawson Speer.

Creighton answered in the bottom of the fifth with three more runs for a 9-2 edge. Jack Stessman had the batter ahead of him intentionally walked. He made the most of the opportunity by getting a two-run single. Michael Meckna also had an RBI hit in the frame.

Bryant didn't go away quietly after that. The Black Sox scored two runs in the final inning attempting a rally and left two runners on base after Creighton was able to record the final out.

"We were a couple hits away in a couple innings from tying this or winning it," Bryant Black Sox coach Darren Hurt said. "That first inning got away from us. We lost a couple balls in the sun. Things just didn't go our way early. I'm proud of the guys though. We could have easily put our heads down. But they battled."

Bryant, playing this weekend without its two top pitching arms, was kept in the game with the performance on the mound from 15-year-old Jase Ham.

After the Black Sox allowed the big first inning, Ham came in out of the bullpen to pitch three shutout innings. He finished his outing by going 3 2/3 innings, allowing 3 runs and 5 walks with his 2 strikeouts.

"He was probably a nervous wreck, but he went out on the mound and gave us a chance with his performance on the mound," Hurt said. "He went in there and competed his tail off. He did a good job for us." 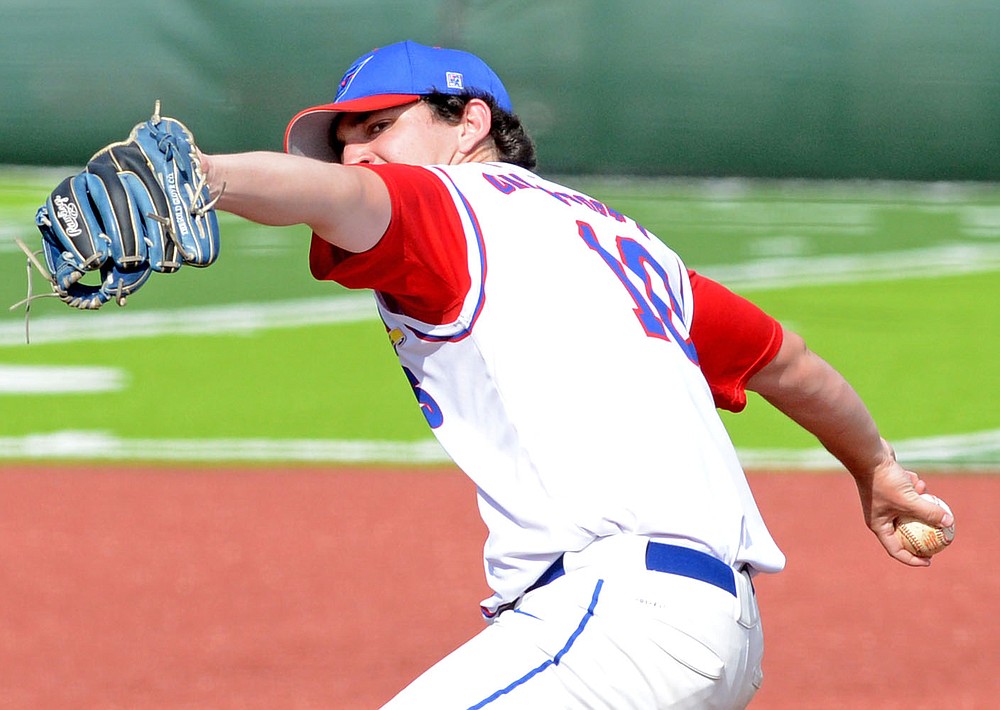 Creighton Prep pitcher Ryan Bauer works in the second inning against Bryant on Sunday, June 6, 2021 at Hunts Park in Fort Smith during the championship game in the Katzer tournament. (Special to NWA Democrat Gazette/Brian Sanderford) 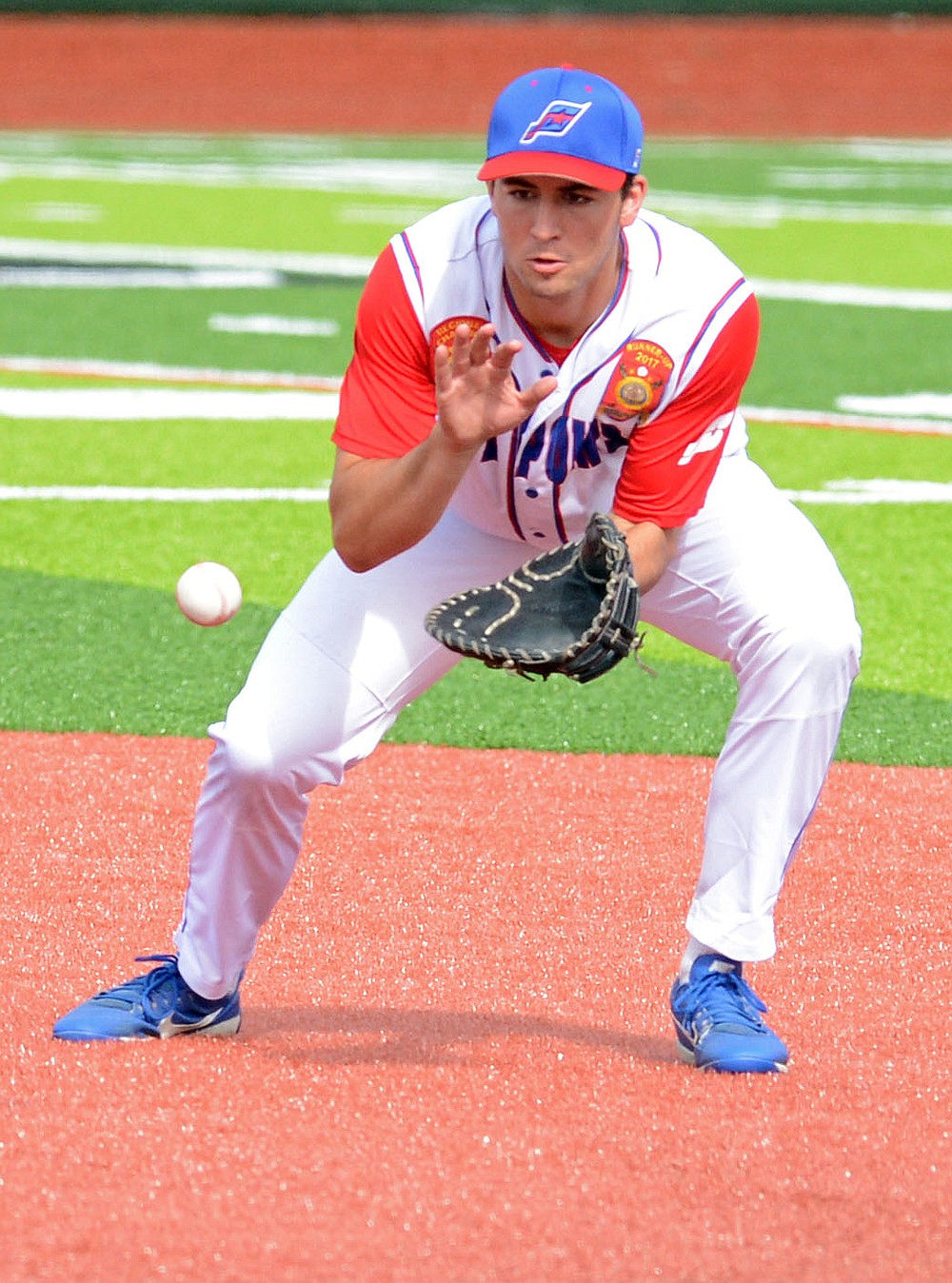 Creighton Prep first baseman Brok Laney fields a ball hit by Bryant's Ryan Riggs, and getting the put out at first on Sunday, June 6, 2021 at Hunts Park during the championship game in the Katzer tournament. (Special to NWA Democrat Gazette/Brian Sanderford) 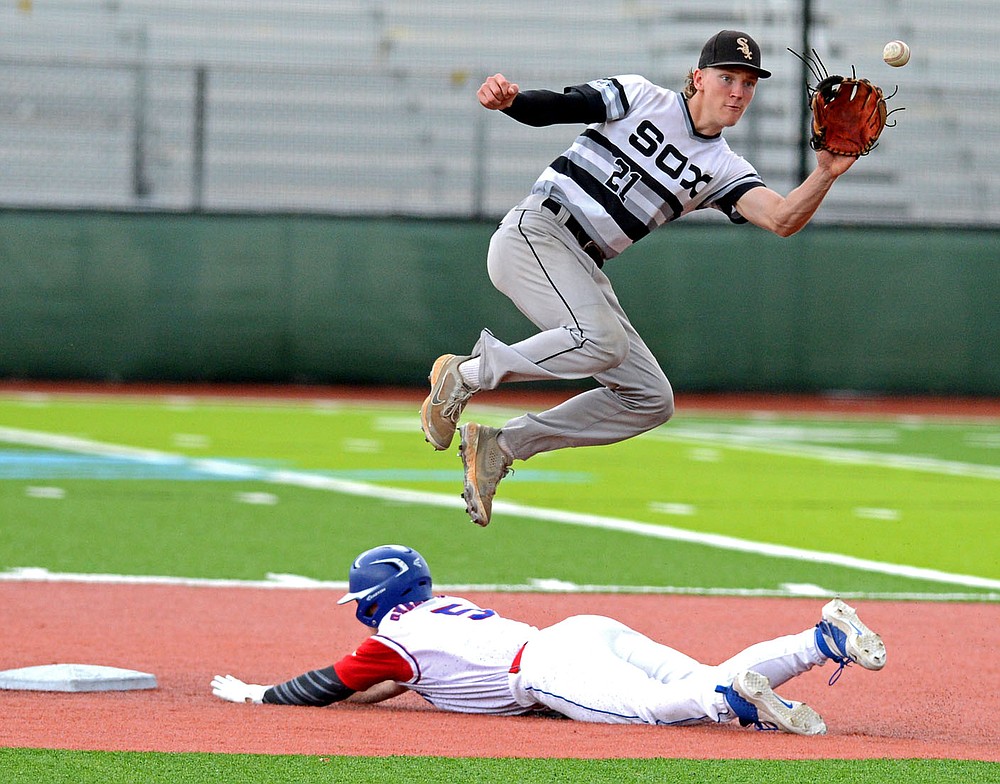 Creighton Prep's Jack Stessman steals second as he slides in under Bryant's JT Parker on Sunday, June 6, 2021 at Hunts Park in Fort Smith during the championship game in the Katzer tournament. (Special to NWA Democrat Gazette/Brian Sanderford)
ADVERTISEMENT