Harris off to Mexico, Guatemala meetings 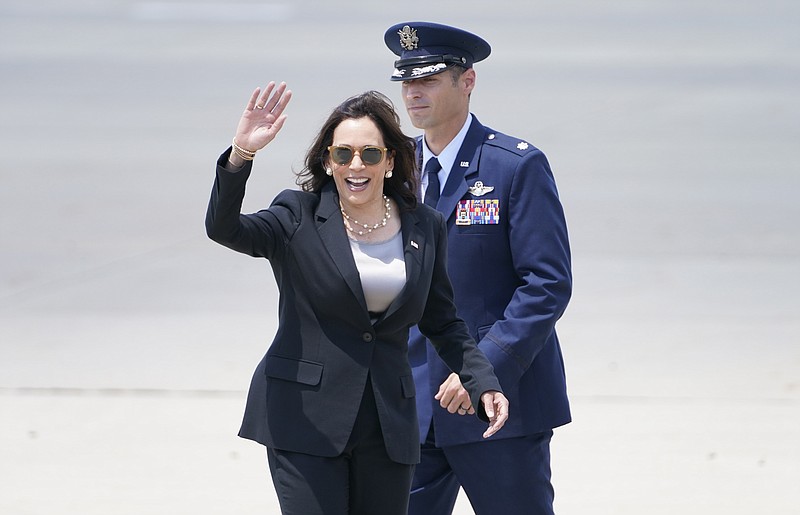 WASHINGTON -- Kamala Harris, on her first foreign trip as vice president, is looking to deepen diplomatic ties with Guatemala and Mexico, two Latin American nations key to the Biden administration's efforts to stem the spike in migration at the U.S. border.

Harris departed Washington on Sunday after a delay caused by a technical issue on Air Force Two. About 30 minutes into her flight to Guatemala City, the issue forced the plane to return to Joint Base Andrews, and she departed on another plane about an hour and a half later.

The vice president is seeking to secure commitments for greater cooperation on border security and economic investment, but corruption in the region -- a far more intractable challenge -- will complicate her efforts.

It's already had a significant effect on her work in the region. Harris has yet to engage substantively with the leaders of Honduras and El Salvador, who are both embroiled in corruption scandals. And it's an issue that experts in the region say will need to be addressed to make any lasting changes.

"Corruption is a cancer in the region," said Jason Marczak, director of the Atlantic Council's Adrienne Arsht Latin America Center. "Addressing corruption is fundamental to creating hope and creating the potential for opportunity."

[Video not showing up above? Click here to watch » https://www.youtube.com/watch?v=1JAnZmIre6A]

Marczak said corruption in the region affects human-rights protections, employment opportunities, the cost of goods and much more. Jobs, he said, will come "with investment, and investment comes where there is certainty in the rule of law." Without that, efforts to improve living conditions can only go so far, he said.

In the months since she was tasked by President Joe Biden with addressing the root causes of migration to the U.S.-Mexico border -- Biden had a similar job when he was vice president -- Harris has laid out an approach centered on creating better opportunities and living conditions in the region through humanitarian and economic aid.

Harris announced plans to send $310 million to provide support for refugees and address food shortages, and recently secured commitments from a dozen companies and organizations to invest in the Northern Triangle countries -- Guatemala, El Salvador and Honduras -- to promote economic opportunity and job training.

Washington won some goodwill through its vaccine diplomacy last week. Guatemala's president, Alejandro Giammattei, and Mexico's Andres Manuel Lopez Obrador both received calls from Harris on Thursday telling them the U.S. would be sending 500,000 doses and 1 million doses, respectively, of covid-19 vaccine.

"This is a historic moment," said Sergio Gonzalez, who advised Harris on immigration issues when she was a U.S. senator from California. "This is going to be the first time that other nations receive a vice president of the United States who is a woman of color."

Mexico is crucial to Harris' portfolio as the transit route for migrants heading to the U.S. Martha Barcena, former Mexican ambassador to Washington, said the vice president will help define U.S. relations with its southern neighbor.

"It will be the first impression of a high-level official of the new U.S. administration to Mexico," Barcena said Friday in a discussion held by the Atlantic Council, a Washington-based think tank.

Soon after Harris returns Tuesday, Biden will take his maiden overseas trip as president, for summits with allies in Britain and Belgium, followed by his first meeting as president with Russian leader Vladimir Putin in Switzerland.

While in Guatemala, Harris plans to meet community leaders, innovators and entrepreneurs. In Mexico, she will participate in a conversation with female entrepreneurs and hold a roundtable with labor workers. That's in addition to bilateral meetings with the leaders of both countries.

Harris said during a May meeting with Guatemalan justice leaders that corruption is a "significant deterrent" to economic investment there.

She's underscored the need to address corruption in public remarks and events. In her meeting with a number of leading voices on Guatemala's justice system, she noted her work as a prosecutor and said that "injustice is a root cause of migration."

"Part of giving people hope is having a very specific commitment to rooting out corruption in the region," she said.

Harris has also raised the issue during virtual meetings with the leaders of both countries and aides say she will do it again during meetings on her trip.

Stephen Johnson, who advised the George W. Bush administration on the region, said corruption will probably be mentioned obliquely in public statements when Harris meets with Giammattei, but "in the private conversations, I think it will be a bit more pointed."

"There are acute factors -- natural disasters, food insecurity, the climate crisis, and then there are root causes -- poverty, violence, corruption," said Harris' chief spokesperson, Symone Sanders. "From the vice president's perspective, this is about helping build hope in the region, and that a better life is in fact possible at home."

Harris will also have to navigate the politics of immigration. Congressional Republicans have criticized both Biden and Harris for deciding not to visit the border, and contend the administration is ignoring what they say is a crisis there.

April was the second-busiest month on record for unaccompanied children encountered at the U.S.-Mexico border, after March's all-time high. The Border Patrol's total encounters in April were up 3% from March, marking the highest level since April 2000.

Conservatives will be watching Harris closely for any missteps, hoping to drag her into further controversy on an issue they see as a political winner.

In her efforts to win commitments on corruption from the region's leaders, Harris can point to a number of moves by the administration last week.

Secretary of State Antony Blinken emphasized the problem during his own recent trip to Central America. The White House issued a memo elevating foreign corruption to a major national security issue, and directed all federal agencies to prioritize it and modernize their foreign corruption-fighting tools.

Eric Olson, director of policy at the Seattle International Foundation, which works to promote good governance in Central America, said addressing corruption will take particular diplomatic skill. Harris will need to hold the leaders of Guatemala and Mexico accountable while also deepening trust and cooperation with the two nations.

"The challenge that she faces is how to, on the one hand, have a conversation, keep the door open -- while not seeming to ignore the obvious elephant in the room, which is this incredible penetration of the state by corrupt actors," he said.

Pointing up the issue, Harris has avoided direct talks with the increasingly authoritarian Salvadoran President Nayib Bukele and Honduran President Juan Orlando Hernandez, whose brother was recently sentenced to life in prison by a federal judge in Manhattan for drug trafficking in a case that implicated the Honduran president.

Lower-level administration officials have met with their counterparts in El Salvador and Honduras, but the leaders are still off-limits.

In Mexico, Lopez Obrador continues to face a complicated security situation in many parts of the country. Nearly three-dozen candidates or pre-candidates were killed before this weekend's midterm elections as drug cartels sought to protect their interests.

The government's inability to provide security in parts of the country is of interest to the U.S. in an immigration context, both for the people who are displaced by violence and the effect it has on a severely weakened economy trying to reemerge from the pandemic.

Mexico remains a key U.S. ally in trying to slow immigration, not only of its own citizens, but also those crossing its territory. Successive U.S. administrations have effectively tried to push their immigration enforcement goals south to Mexico and Guatemala.

Nongovernmental organizations placed Guatemala's widespread corruption at the top of their list of concerns before Harris' visit. Last month, two lawyers who are outspoken critics of Giammattei's administration were arrested on what they say were trumped-up charges aimed at silencing them.

The selection of judges for Guatemala's Constitutional Court, its highest, was mired in influence peddling and alleged corruption. Giammattei picked his chief of staff to fill one of the five vacancies. When Gloria Porras, a respected force against corruption, was elected to a second term, the congress controlled by Giammattei's party refused to seat her.

Harris' visit comes with high expectations, but organizations concerned about the rule of law and corruption in Guatemala have doubts about what the U.S. can do to halt the deterioration or co-opting of government institutions.

Tiziano Breda, a Central America analyst with Crisis Group, said the challenge for Harris "is to not play the Guatemalan government's game, where on one side it expresses willingness to collaborate with the United States while on the other it takes steps that weaken the rule of law, accountability and the fight against corruption."

Breda said the risk of any public show of support to the government could embolden it.

While experts say they are watching for potential announcements on further food or economic aid coming out of the trip, clear progress on corruption may be more elusive, and any efforts will take much longer to bear fruit.

"These are societies built on corruption," said Olson. "You're not going to have an impact in six months."

Information for this article was contributed by Alexandra Jaffe, Christopher Sherman and Sonia Perez D. of The Associated Press; and by Noah Bierman of the Los Angeles Times (TNS). 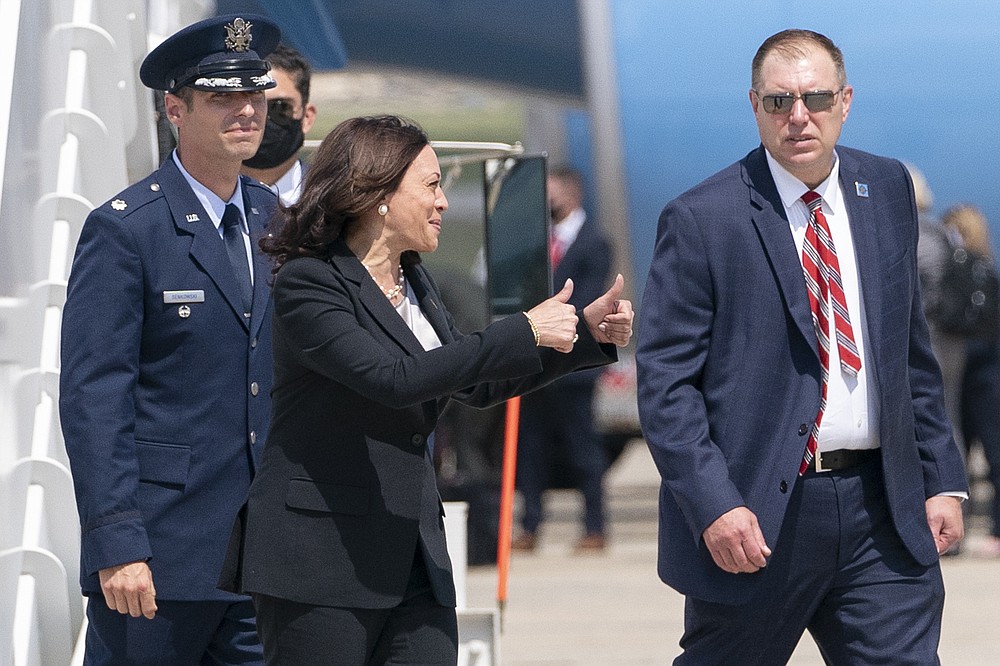 Vice President Kamala Harris, center, makes a double thumbs up sign toward members of the media after exiting Air Force Two after a technical issue required the plane to return to Andrews Air Force Base, Md., Sunday, June 6, 2021, after it had already started begun flying to Guatemala City. (AP Photo/Jacquelyn Martin) 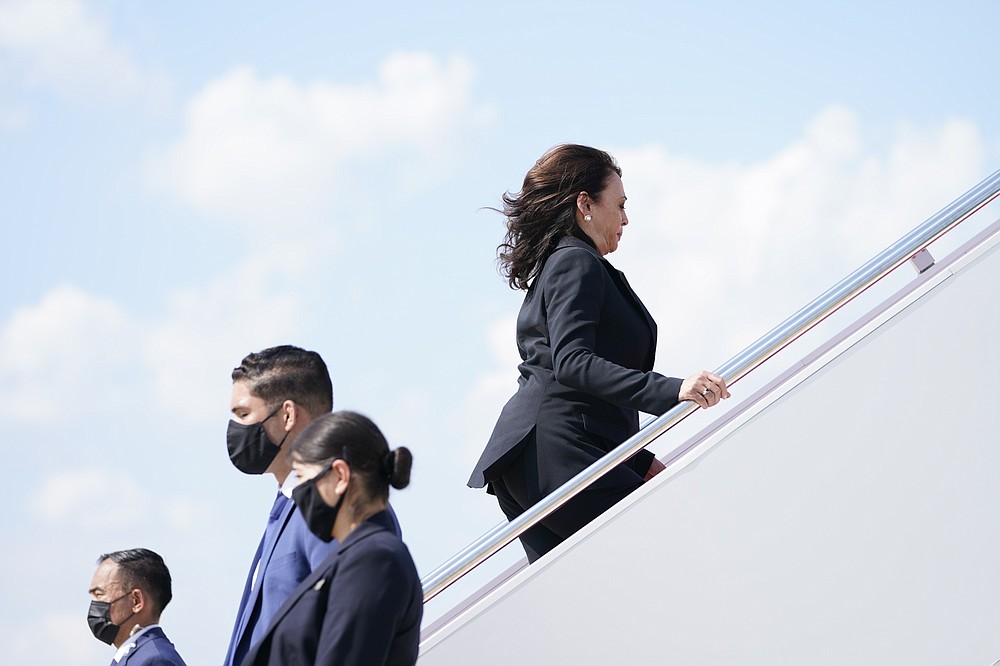 Vice President Kamala Harris boards Air Force Two as she leaves Andrews Air Force Base, Md., Sunday, June 6, 2021, en route to Guatemala City. Shortly after the plane was returned to the Air Force Base due to a technical issue. (AP Photo/Jacquelyn Martin) 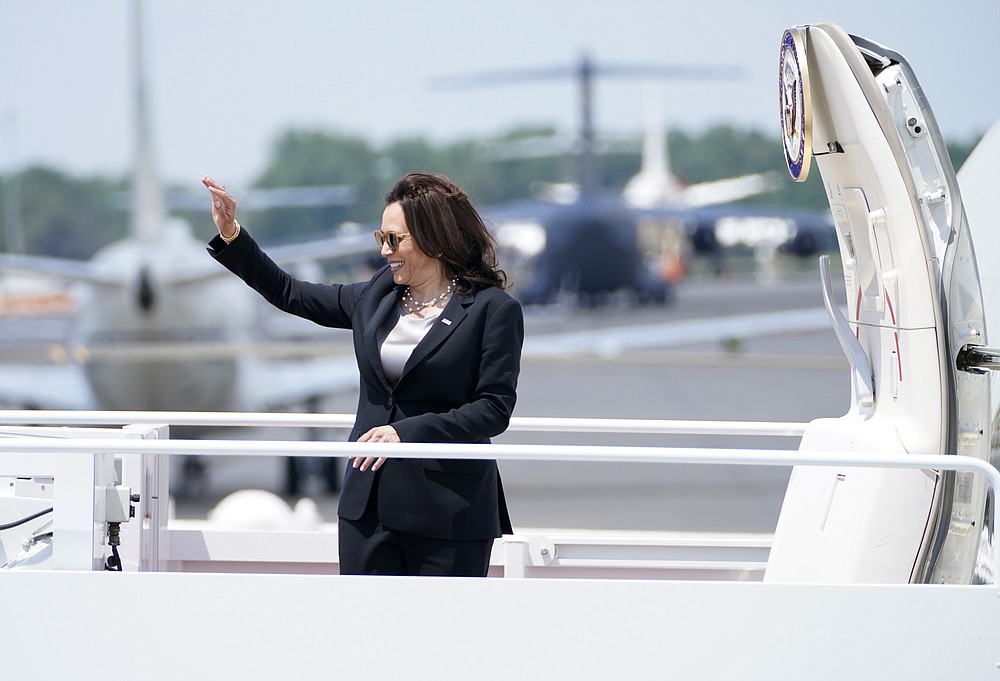 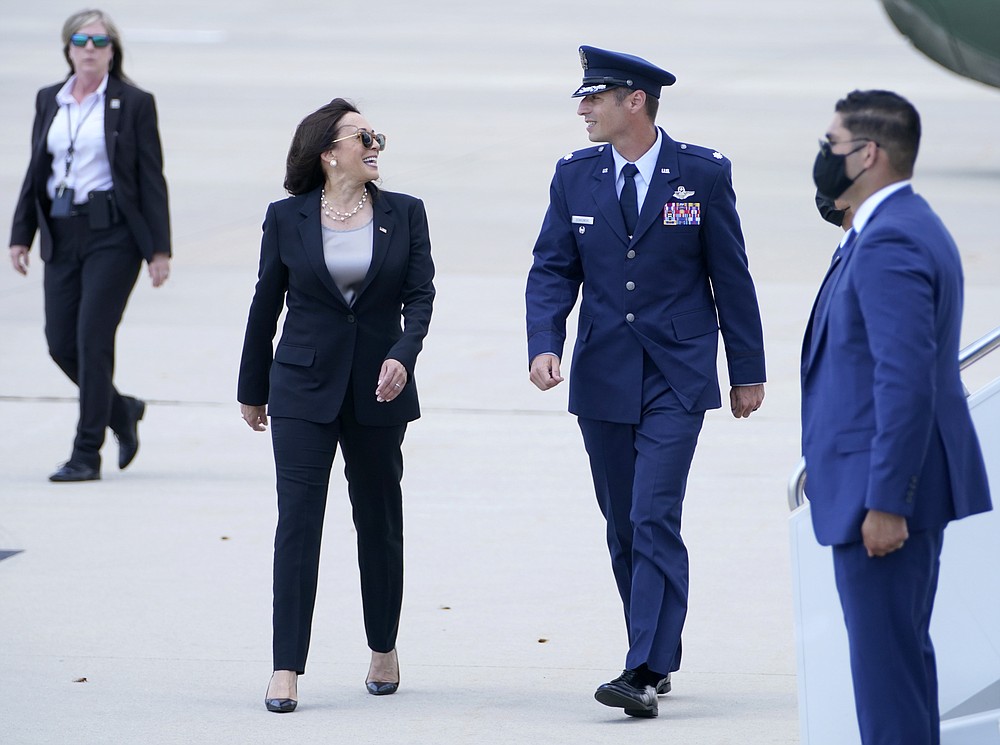