Home gets sweet for gritty Clippers 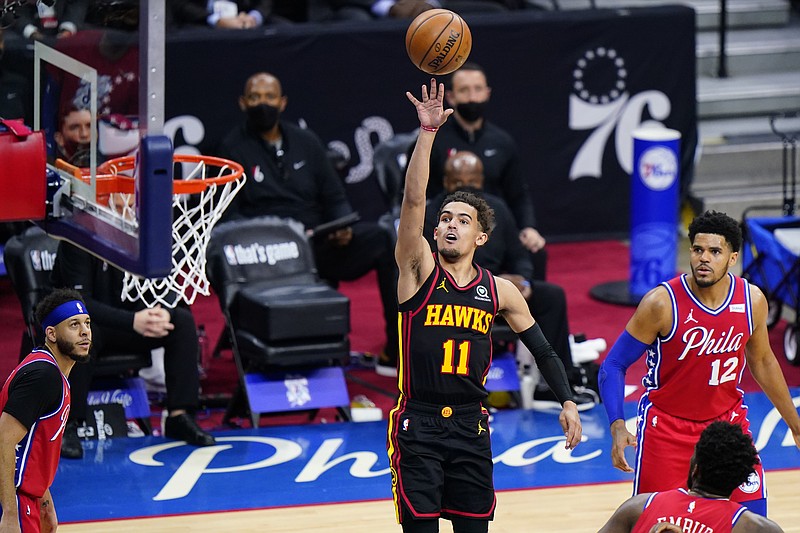 Atlanta Hawks' Trae Young goes up for a shot during the second half of Game 1 of a second-round NBA basketball playoff series against the Philadelphia 76ers, Sunday, June 6, 2021, in Philadelphia. (AP Photo/Matt Slocum)

Leonard narrowly missed a triple-double, finishing with 28 points, 10 rebounds and 9 assists, to help the Clippers finish off the Dallas Mavericks 126-111 on Sunday in Game 7 of the first-round series.

"We saw everything in this series," Mavs Coach Rick Carlisle said.

The Clippers became the fifth team in league history to lose the first two games at home and come back to win a playoff series.

"It was a great win for us," said Tyronn Lue, who improved to 4-0 in Game 7s of his coaching career. "It showed a lot about our team."

Luka Doncic had 46 points, 14 assists and 7 rebounds to lead the fifth-seeded Mavs, who have yet to win a playoff series since capturing the NBA championship in 2011. He finished the series with 250 points, 55 rebounds and 72 assists.

"Game seven is the toughest game. You've got to give it everything," Doncic said. "We've been in the playoffs twice since I've been there, lost both times. You get paid to win."

"They trusted me," Kennard said. "We trusted each other."

The Clippers were the league's top three-point shooting team during the regular season, but struggled at times in the series. They regained their touch in Game 7, making 20 three-pointers, led by Morris' seven. The Mavs hit 10, with Doncic having five.

Trailing by eight at halftime, the Mavs outscored the Clippers 19-6 to open the third and take an 81-76 lead. Doncic had just two points in the run, with Dorian Finney-Smith hitting two three-pointers and Tim Hardaway Jr. adding another. Finney-Smith finished with 18 points and 10 rebounds.

The Mavs won the first two games at Staples Center before the Clippers tied it up with two wins in Dallas. The Mavs won Game 5 in LA and Leonard powered the Clippers to a road win in Game 6 with a huge fourth quarter.

"We all feel like we should have won the series," Finney-Smith said. "We just couldn't win at home."

The Clippers took control with a 24-4 spurt -- including 12 in a row -- to lead 100-85 going into the fourth. Morris made three three-pointers and Kennard hit a pair. Leonard scored seven points, highlighted by a dunk off George's pass. Defensively, Leonard came up with a big block and Mann helped contain Doncic, who had the Mavs' only points over the end of the third.

"Kawhi came with the mentality that he's going to take this game," said Reggie Jackson, who added 15 points. "He wasn't going to be shy about his play at all. Once he got going early, defenses had to change."

Dallas cut its 19-point deficit early in the fourth to seven points on Doncic's fifth three-pointer of the game with just under 3 minutes remaining. But the Clippers' own long-range prowess carried them, with Jackson and Morris connecting on back-to-back three-pointers for a 120-107 lead.

Doncic matched his points total from Game 6 with 29 points in the first half on 10 of 14 shooting.

PHILADELPHIA -- Trae Young put an early smackdown on Philly and again rose to the occasion in the playoffs for a Hawks team that wasted no time grabbing control of the Eastern Conference semifinals.

Young scored 25 of his 35 points in the first half as Atlanta shook off Joel Embiid and a hostile crowd and held on to beat Philadelphia in Game 1.

Embiid raised a sledgehammer as he returned from a one-game absence with a cartilage tear in his right knee. He walked out with WWE star Triple H to a roaring ovation.

Young and the Hawks had the Sixers down for the count from the jump.

The Sixers' rally came too late as they pulled within three with 1:01 left on consecutive baskets from Embiid. Atlanta's Bogdan Bogdanovic put his fingers to his lips and shushed the raucous crowd when he hit a three-pointer that sealed the win.

The Hawks made 14 of their first 18 shots from the floor and were the aggressors eagerly seizing their moment on national television. Young, much like he did in five games against the Knicks when he averaged 29.2 points, thrived in the spotlight. For all the focus on Embiid, All-Star Ben Simmons and the top-seeded Sixers, Young was the can't-miss player in Game 1 -- as in, he rarely did with the ball, and all eyes were on him.

The Hawks used a 17-0 run in the first half that quickly made it a rout and Young was there shaking, saluting and toying with the Sixers and the crowd. Young bowed during the clincher to the New York crowd that had jeered him in every game. He stuck a pose in Philly -- he held his right arm high and pointed toward the basket for several seconds that followed a 27-footer he buried to close the first half.

Danny Green could not hang as the primary defender on Young instead of Simmons, an NBA defensive player of the year candidate.

The 6-1 Young led the Hawks to the playoffs for the first time since 2017 and has craved the pressure that comes with playing big postseason games in bigger cities.

Embiid did his part with 39 points. Tobias Harris had 20 points and 10 rebounds. Simmons scored 17 points and again struggled from the free-throw line, going 3 for 10.

Bogdanovic and Collins each scored 21 points for the Hawks. 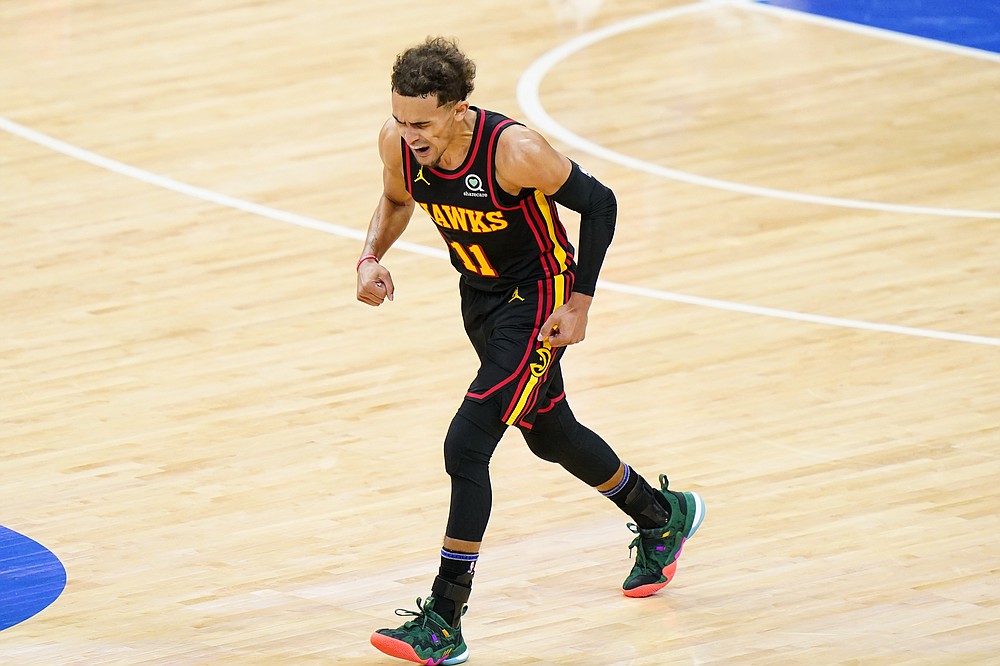 Atlanta Hawks guard Trae Young reacts after making a basket during the first half of Game 1 of a second-round NBA basketball playoff series against the Philadelphia 76ers, Sunday, June 6, 2021, in Philadelphia. (AP Photo/Matt Slocum) 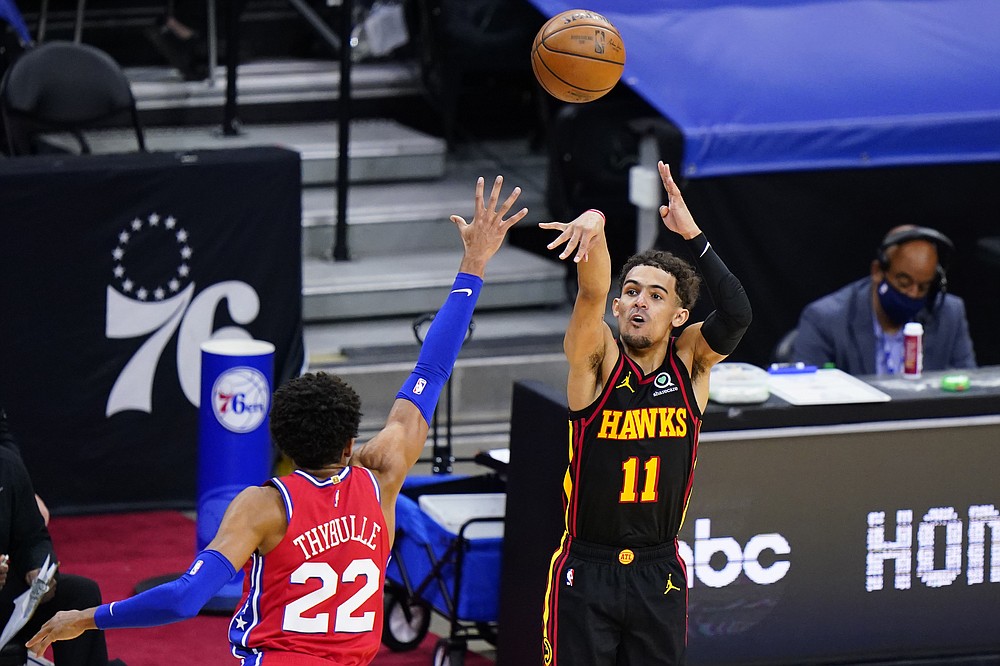 Atlanta Hawks' Trae Young (11) goes up for a shot against Philadelphia 76ers' Matisse Thybulle (22) during the second half of Game 1 of a second-round NBA basketball playoff series, Sunday, June 6, 2021, in Philadelphia. (AP Photo/Matt Slocum) 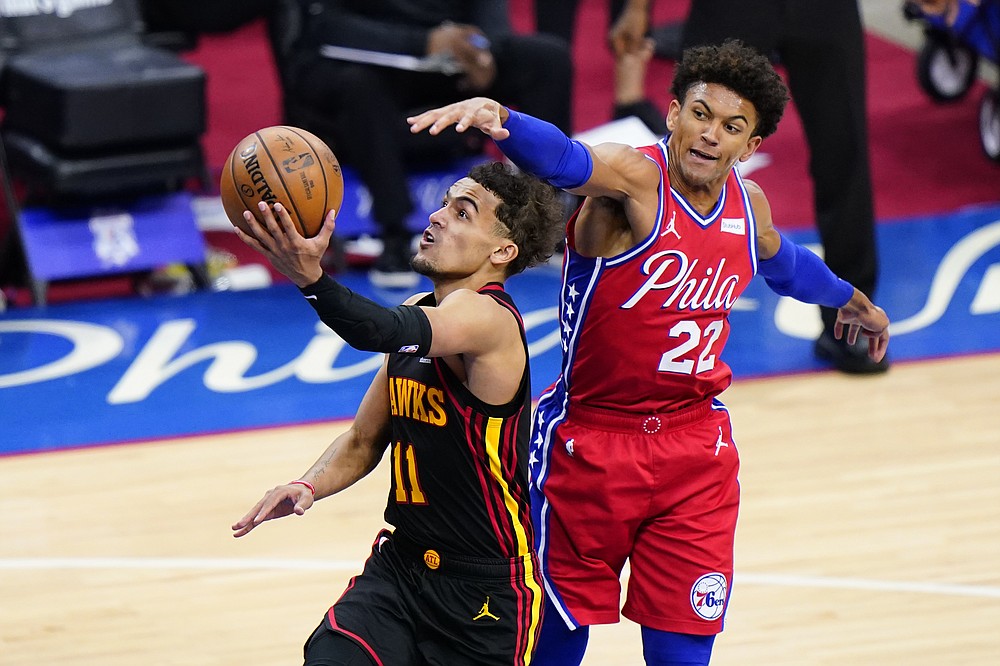 Atlanta Hawks' Trae Young, left, goes up for a shot past Philadelphia 76ers' Matisse Thybulle during the second half of Game 1 of a second-round NBA basketball playoff series, Sunday, June 6, 2021, in Philadelphia. (AP Photo/Matt Slocum) 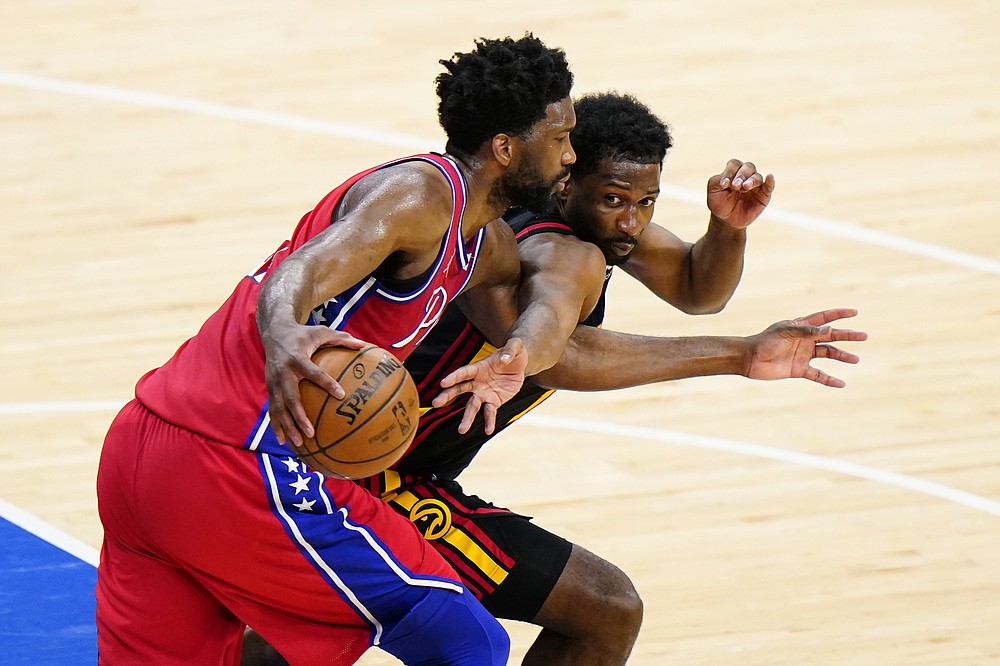 Atlanta Hawks' Solomon Hill, right, tries to get the ball away from Philadelphia 76ers' Joel Embiid during the second half of Game 1 of a second-round NBA basketball playoff series, Sunday, June 6, 2021, in Philadelphia. (AP Photo/Matt Slocum) 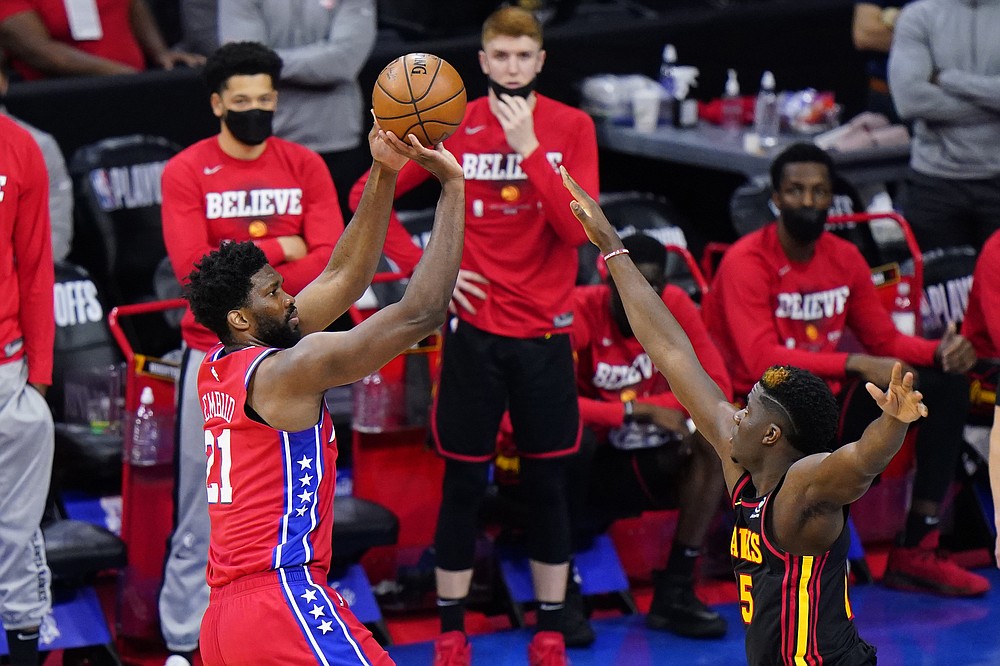 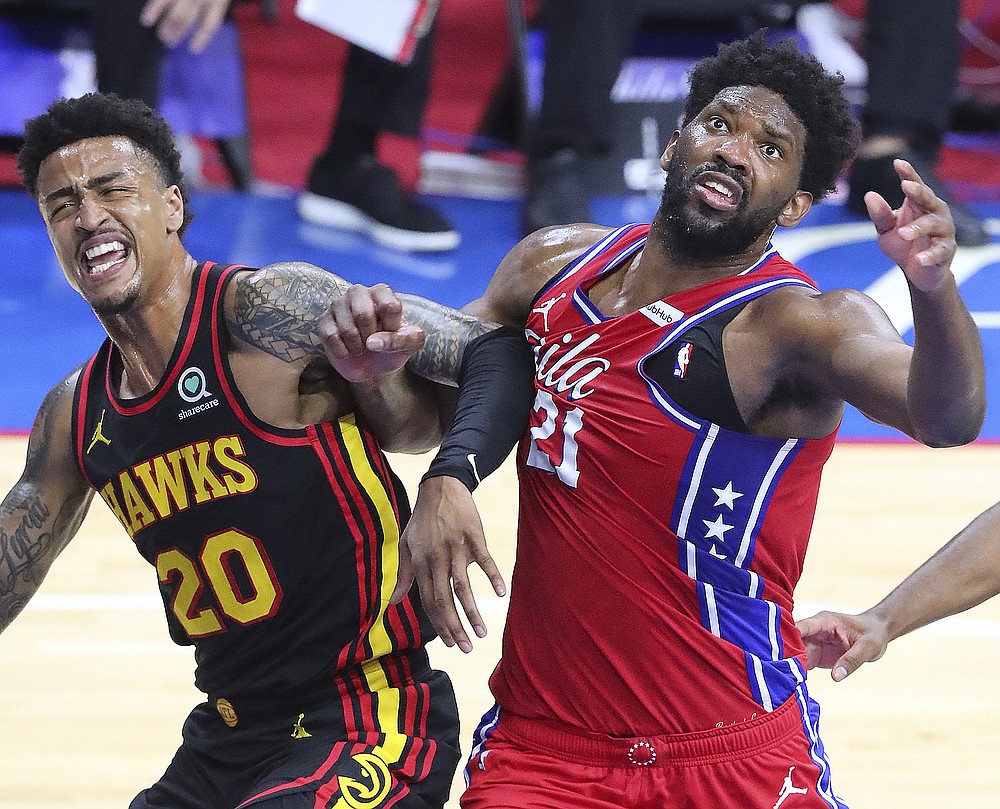 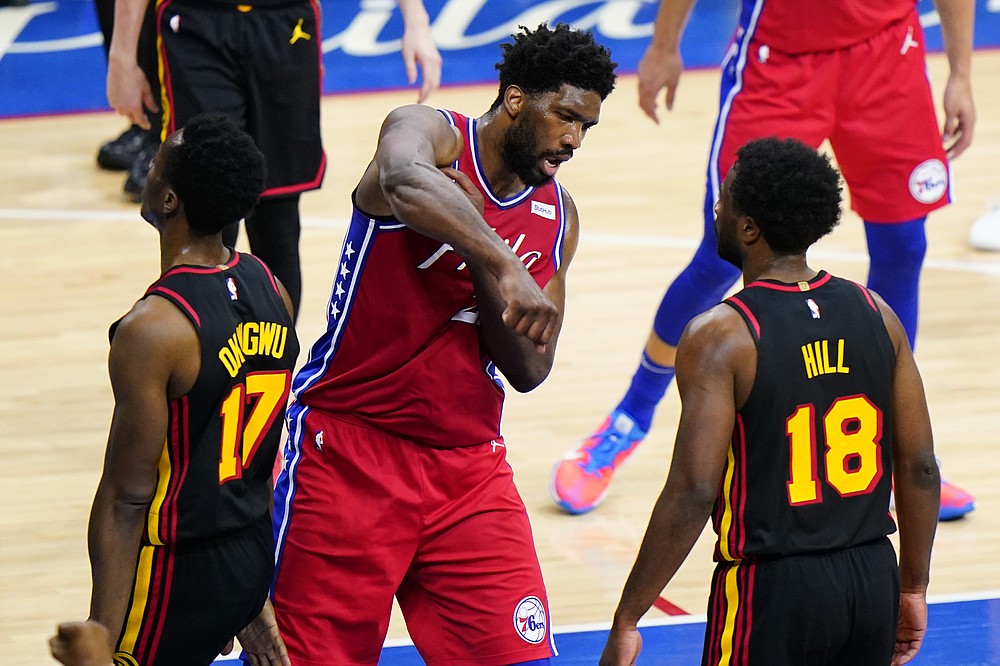