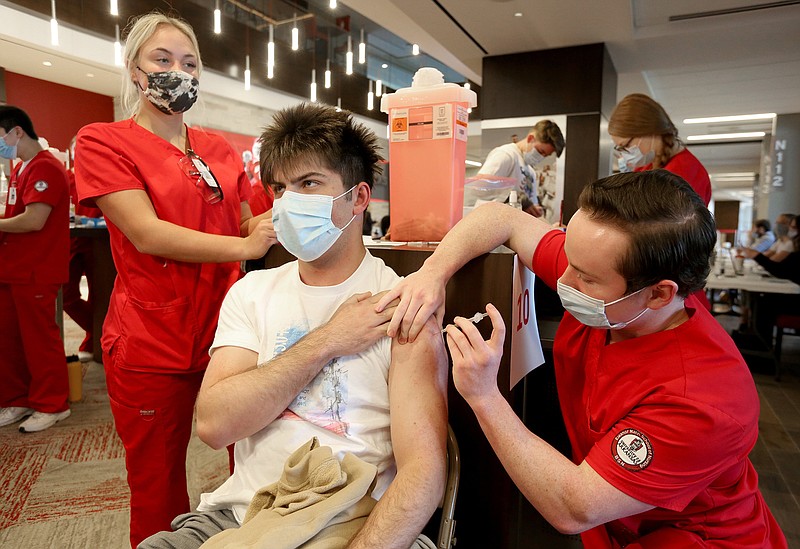 Beck McCall, a junior at the University of Arkansas, receives a covid-19 vaccination shot from Michael Ford, a S1 student in the Eleanor Mann School of Nursing at the University of Arkansas, Thursday, April 1, 2021, during an open covid-19 vaccination clinic hosted by the Northwest Arkansas Council in collaboration with the region's health care systems at Donald W. Reynolds Razorback Stadium on campus in Fayetteville. (NWA Democrat-Gazette/David Gottschalk)

An effort to track the covid-19 vaccination rates of Arkansas college students is underway at the state Department of Health.

Early data shows wide disparities among campuses -- from as low as 6% to as high as 72% -- with the project aiming to help those colleges boost vaccine uptake rates, said Dr. Namvar Zohoori, the Health Department's chief science officer.

"It's really a very important public health tool to know where the student position is in terms of their uptake of vaccine, and then letting their campus administrators be able to try to increase that uptake," Zohoori said.

But Zohoori and other public health experts said having vaccination data will help colleges make informed decisions, including about campus activities. Colleges and universities have announced plans for a return this fall to having classrooms at normal capacities and for campuses to have fewer covid-19 restrictions.

The report stated that 33,424 students had received two shots of covid-19 vaccine, for a fully vaccinated rate of 28.9%.

The student total included an unknown number of out-of-state residents. Students from 47 colleges were included in the total. The data excludes high school students dually enrolled in college courses.

Zohoori said the project aims to help individual colleges by providing them information about their students. There are no plans to regularly release data publicly, a Health Department spokeswoman said.

The Health Department released the early May report after a request made by the Arkansas Democrat-Gazette under the state's public disclosure law. A Health Department attorney, Reginald Rogers, said in an email that the report was created May 10.

[DATA SHARING: Click here to read the agreement between the Arkansas agencies » arkansasonline.com/67doc/]

In Arkansas, college students as a group were not eligible to receive covid-19 vaccinations until March 16, and eligibility at first extended only to students living in residence halls or Greek housing. On March 30, Gov. Asa Hutchinson announced that all Arkansans 16 and older were eligible to get vaccinated.

On May 10, a statewide total of 1,061,984 Arkansans -- approximately 35% of the state's population -- had received at least one vaccine dose, according to Health Department data.

The governor on May 4 announced a goal to have 50% of all Arkansans at least partially vaccinated within the following 90 days.

An agreement signed April 27 between the Health Department and the state Division of Higher Education spells out what data is to be shared.

Zohoori said schools are able to get information about percentages and numbers rather than lists of student names, with the Health Department following medical privacy laws.

"We didn't want to detail individual students and say, 'This student is vaccinated and this student is not,'" Zohoori said. "That's not what we do or want to do."

The report from early May listed two colleges with less than 10% of students having received at least one dose of covid-19 vaccine: Ecclesia College and Crowley's Ridge College. Both are private Christian colleges with fewer than 200 students, according to state enrollment data.

Ecclesia College, located in Springdale, had 13 students receive at least one dose of covid-19 vaccine, while Crowley's Ridge College, in Paragould, had nine students, according to the Health Department report.

Zohoori said vaccination rates can rise quickly at smaller schools if just a few more students opt for the shots.

Elizabeth Newlun, Ecclesia College's dean of students, was unavailable Friday and did not respond to a phone message seeking comment.

Richard Johnson, president of Crowley's Ridge College, said the college earlier in the year sent out emails to students encouraging them to get vaccinated, with information provided about where to go in Paragould or nearby Jonesboro to receive the shots.

"I do hope we can get that rate higher," Johnson said.

He said the campus is "doing our best to keep the students safe, the staff safe, and we've actually done a good job with that," with no covid-19 cases recently.

The campus has no plans for a vaccine mandate, but "we'll keep doing our best to follow the advice given to us by those that are in a position of authority that we need to listen to," Johnson said. "We'll take that job very seriously."

In Arkansas, public universities and colleges are blocked from mandating that students be vaccinated against covid-19. Act 977 of 2021 states, in part, that "a state agency or entity, a political subdivision of the state, or a state or local official shall not mandate or require an individual to receive a vaccine or immunization for coronavirus 2019."

Public entities, including colleges and universities, also must drop any face covering mandates by late July because of another new state law.

Many have eased off the mask protocols already. Arkansas State University System trustees on Thursday dropped a policy requiring masks across all campuses, though ASU will continue to require face coverings in classrooms until the new law takes effect, according to a message to the Jonesboro campus Friday from Jon Carvell, ASU's safety and emergency management coordinator.

Dr. Amesh Adalja, a senior scholar with the Johns Hopkins Center for Health Security, said he didn't know of other states taking an approach similar to Arkansas when it comes to tracking college students' covid-19 vaccination rates.

But it's natural for campus leaders to want the information, he said.

"Even though covid is not likely to cause severe disease in college students, it's likely to be very disruptive to on-campus learning," Adalja said, referring to potential outbreaks.

Data could play a role in making decisions about extracurricular activities and the risks posed from covid-19, he said.

In states prohibiting vaccine mandates or other measures, it's "more important for a university administrator to know what percent of their students are vaccinated," Adalja said.

Some of the state's largest colleges, including the University of Arkansas, Fayetteville and the University of Central Arkansas, had between 40% and 50% of students with at least one dose of covid-19 vaccine, according to the Health Department report from early May.

But 29 community colleges and four-year universities in the state had rates below 30%.

"We're not pleased at all with that rate," said Elbert Bennett, vice chancellor for student affairs at the University of Arkansas at Pine Bluff.

A spokesman for the university said Thursday that the campus had a 28.9% student covid-19 vaccination rate based on data from the state Division of Higher Education.

However, the document released by the Health Department listed UAPB as having 510 students, or 22.8%, at least partially vaccinated.

The report -- as well as future reports -- won't have data on any out-of-state vaccinations, and while a majority of students at UAPB are from Arkansas, the percentage of students from outside the state exceeded 40% in fall 2018, according to federal data. UAPB is among a group of schools known as historically Black colleges and universities.

Raising the uptake rate will involve educating students and parents who have questions about the vaccines, Bennett said.

Another plan is to offer vaccine shots at every home football game this fall, Bennett said. He said the university will talk with corporate sponsors "to see if we can have prizes or some incentives to encourage" vaccination.

Another idea is to have student roommate selection based in part on vaccination status, Bennett said.

"We're trying, as much as the law will permit us, to give students a choice of whether they want their roommate to be a person that has taken the vaccine or has not taken the vaccine," Bennett said.

UAPB is the only college in Arkansas to sign on early to a new White House initiative, the Covid-19 College Challenge. Schools involved in it pledge to engage their campus communities on the topic of vaccination.

Two medical colleges -- the University of Arkansas for Medical Sciences and Arkansas Colleges of Health Education -- topped all schools listed in the Health Department report with student rates of full vaccination above 60%.

Among universities with mostly undergraduates, none had a higher percentage of students having received at least one vaccine dose than the University of Central Arkansas. The Conway campus had 4,020 students receive at least one dose of covid-19 vaccine, for a rate of 45.3%, according to the Health Department data.

The University of Arkansas, Fayetteville, the state's largest public university, had a total of 10,900 students who received at least one dose of covid-19 vaccine, for a rate of 43.5%, according to the report. Roughly half of UA-Fayetteville's freshman classes have come from outside Arkansas in recent years.

Harding University, a private Christian university located in Searcy, had a total of 1,709 students having received at least one dose of covid-19 vaccine, for a rate of 41.2%.

Other schools with at least 40% of students receiving at least one vaccine dose were: Ouachita Baptist University, located in Arkadelphia; Baptist Health College Little Rock; and the University of Arkansas at Little Rock.

Colleges with rates of between 35% and 40% of students having gotten at least one vaccine dose were: John Brown University, located in Siloam Springs; Lyon College in Batesville; Henderson State University in Arkadelphia; and Northwest Arkansas Community College in Bentonville.

Ouachita Baptist University, a private school, led all primarily undergraduate institutions in terms of the rate of students fully vaccinated. Ouachita Baptist had 587 students complete the vaccination series, a rate of 40.1%.

Zohoori said not every college was included in the report.

Hendrix College is not listed, though the private liberal arts college in Conway posts on its website a "vax-o-meter" that as of May 27 listed a fully vaccinated student rate greater than 50%. The website states that proof of vaccination "has been confirmed by the Hendrix Contact Tracing and Testing Coordinator."

At Hendrix, students are expected to be vaccinated against covid-19 "unless you have a religious or medical reason not to be vaccinated," according to the university's website.

Outbreaks on a college campus can be harmful to students even if a case of covid-19 is mild, with isolation and quarantine protocols resulting in missed class opportunities and possibly affecting a student's mental health, Zohoori said, adding that the health of others is also a consideration.

"Students tend to be very mobile in the community, and students can spread infection not only within campus but also outside their campus," Zohoori said.

The data-sharing agreement allows the Health Department to get information on students' gender, race, academic year and date of birth.

Zohoori said that potentially, the Health Department could at a college's request run the vaccination rates for groups of students based on these characteristics.

For now, Zohoori said, new reports will not be run every week, but schools will have fresh data available to them soon.

As far as vaccination goals, Zohoori declined to provide a number for the college population and instead said the aim is to boost the rate as high as possible.

The project is part of other Health Department efforts, he said, adding that state health officials are working with campuses to help with on-site vaccination clinics.

"We wanted to provide the campus community and administrators with the tools necessary to be able to target their students with educational messages and support and mental health resources and education about vaccines," Zohoori said of the data project.