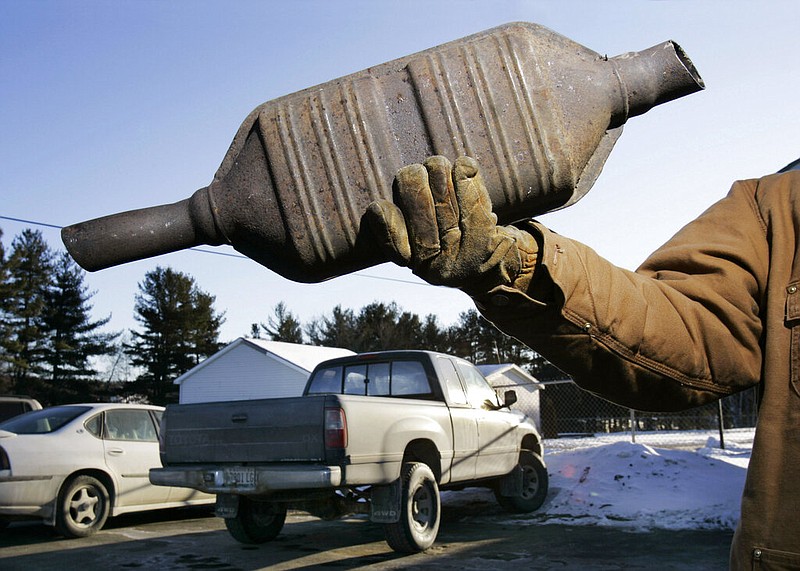 A catalytic converter is seen at Industrial Metal Recycling in Oakland, Maine, in this Jan. 26, 2007, file photo. (AP/Robert F. Bukaty)

Authorities in Central Arkansas warned the public last week about a trend of thefts involving a valuable part of most vehicles' exhaust systems.

In a Thursday news release, Attorney General Leslie Rutledge warned about a rise in catalytic converter thefts from vehicles.

According to the attorney general, the part is an EPA-approved exhaust emission control device that has high value because of its precious metal content.

"These criminals are stealing catalytic converters that will end up costing thousands of dollars to fix," Rutledge said in the release. "I want Arkansans to know the signs beforehand so they can protect themselves from conniving criminals trying to make a quick buck."

Rutledge advised in the release for Arkansans to park their vehicles in well-lit areas close to buildings or inside a garage. She also said motorists should consider welding the converter to the frame of the vehicle and calibrate the alarm system to alert when vibrations are detected.

Little Rock Police spokesman Sgt. Eric Barnes explained Friday that the crimes are difficult to track because most of those types of parts do not have a vehicle identification number printed on them.

Without any way to signify what converter came from which vehicle, Barnes said detectives are having trouble overcoming the obstacle.

"One of the issues we have with tracking down the converters is that they can go to a scrap yard," Barnes said. "There's nothing that signifies that converter came from a car."

According to a release from the agency, the trend increased 400% in 2020 in the county.

Barnes said the trend first began nationally on the West Coast before moving to mid-America.

"That's something that we've seen start [on the] west coast and come central," Barnes said. "We have seen it on car lots or normally in places where cars are located in a large quantity."

Little Rock is not the only city in Arkansas that has seen an increase in the thefts.

According to Benton Police Department spokeswoman Krista Petty, 13 converters have been reported stolen as of the end of May. Investigators in Benton have been able to arrest five people accounting for many of the thefts but cannot tie all of the thefts back to the arrestees.

Timmy Griffin, a service manager at Steve Landers Toyota in Little Rock said Friday that the catalytic converter is used to clean pollutants in the exhaust coming off gasoline vehicles.

"Part of the catalytic converters' internals, which I call a honeycomb, have platinum metal inside of them, and that's why they're such a hot ticket right now," Griffin said.

According to Griffin, the platinum inside the catalytic converter reacts with the pollutants inside of the exhaust coming off of the vehicle preventing them from entering the atmosphere.

Because of the cost of the platinum and depending on the make, model and year of the vehicle, Griffin said the cost of losing a catalytic converter could run up into the thousands.

According to Griffin, many of the newer vehicles his dealership work with do not have as much risk of being stolen because of where the converters are being placed.

Griffin said the resonators do not have any precious metal content and don't have as high of a value.