But critics say data on efficacy is thin by Compiled Democrat-Gazette Staff From Wire Reports | June 8, 2021 at 7:25 a.m. 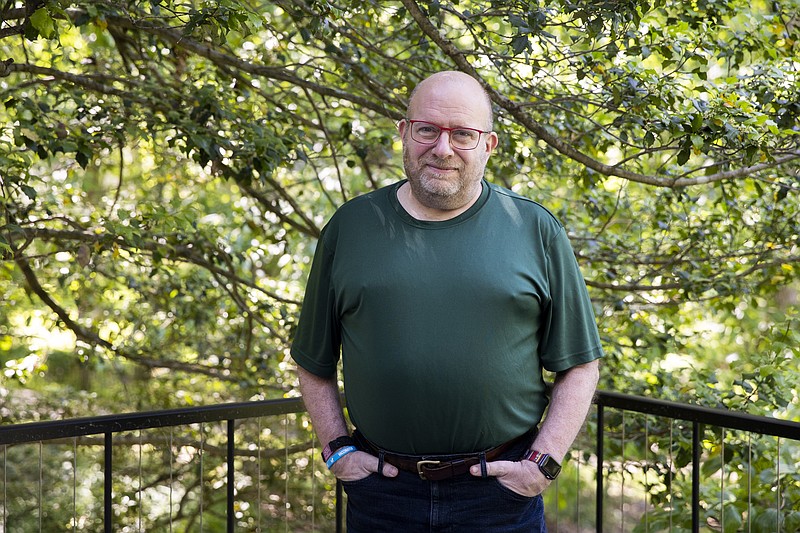 A mental fog descended when Phil Gutis was diagnosed with Alzheimer's. An experimental drug, he says, helped dissipate that fog, but now access to the medication could be imperiled. Photo for The Washington Post by Rachel Wisniewski.

WASHINGTON -- The Food and Drug Administration on Monday approved the first Alzheimer's treatment intended to slow cognitive decline, a move hailed by patients and advocates but sharply criticized by others who argued there was not sufficient evidence the drug works.

The medication, called aducanumab, is the first drug cleared for Alzheimer's that is designed not just to ease symptoms, but to alter the course of the disease by slowing the deterioration of brain function. No Alzheimer's treatment had been approved since 2003, reflecting the extraordinarily high failure rate of drugs developed for the illness.

[Video not showing up above? Click here to watch » https://www.youtube.com/watch?v=_21aFiXS66w]

But in an explicit acknowledgment of the uncertainties about the effectiveness of the drug, the FDA did not grant the medication full approval. Instead, the agency cleared the drug -- its brand name will be Aduhelm -- based on its ability to reduce clumps of amyloid beta in the brain, a hallmark of the disease.

The FDA ordered the drug's maker, the biotech giant Biogen, to conduct a post-approval study confirming that the medicine actually slows cognitive deterioration. If the medication does not provide such a clinical benefit, then the FDA's approval could be withdrawn.

Patrizia Cavazzoni, director of the FDA's Center for Drug Evaluation and Research, said officials believe it is "reasonably likely" that the reduction in amyloid clumps will confer "important benefits to patients."

Monday's FDA decision was the most contentious in years, and it followed prolonged debate among researchers, doctors, patients and advocates about whether the medication works -- a consequence of the drug's complicated history. One of the biggest points of disagreement is whether a reduction in amyloid beta, a sticky compound that many scientists believe damages communication between brain cells and eventually kills them, results in a slowdown in cognitive decline.

Advocacy groups and patients praised the FDA decision, citing the paucity of drugs to help patients. They said the approval would stimulate newfound interest and investment in researching therapies for the progressive, terminal illness and give patients valuable time to be with their families and to perform everyday tasks.

The decision "is a victory for people living with Alzheimer's and their families," said Harry Johns, president and chief executive of the Alzheimer's Association.

Jeff Borghoff, 57, who was diagnosed with early-stage Alzheimer's five years ago and who has received aducanumab in clinical trials, expressed elation about the FDA decision.

"This is epic news," said Borghoff, a resident of Forked River, N.J., who credits the drug with keeping his condition stable. "Now, I may have time to watch my kids get married. My wife said, 'I have more time with you now.'"

But critics assailed the decision, arguing that data on the drug's effectiveness is weak and that the FDA approval represents a dangerous lowering of standards in response to pressure from patients and advocacy groups.

"I'm surprised and disappointed," said Caleb Alexander, an internist and epidemiologist at the Johns Hopkins Bloomberg School of Public Health and a member of the FDA advisory committee that last fall resoundingly rejected the drug.

"I think this product was driven across the line by the magnitude of unmet need, which is enormous," he said. "But unmet needs can't trump regulatory standards, and my concern is that in this instance, they may have."

Alexander noted that other amyloid-reducing drugs have not been shown to improve cognition -- a point disputed by FDA officials, who said an internal agency study indicated that eliminating amyloid clumps could be helpful to patients.

Public Citizen, a watchdog group and frequent critic of the FDA, said in a statement Monday that the agency's close collaboration with Biogen before and after the company's application seeking approval "dangerously compromised the integrity of the agency's review."

Cavazzoni said she was satisfied that the interaction between the staff and the company "was appropriate and necessary" given the FDA's questions and the complexity of Biogen's application.

The intravenous treatment does not cure Alzheimer's disease or reverse it. On Monday, Biogen said it would charge $56,000 a year per patient, making it a blockbuster product for the company and adding billions of dollars to the nation's health tab. Its stock rose 38.3%.

The Institute for Clinical and Economic Review, a Boston group that assesses the value of treatments, said earlier this year that to be cost-effective, aducanumab should be priced at $2,500 to $8,000 a year per patient.

Medicare is likely to shoulder much of the cost of the drug, given the age of people with Alzheimer's, but it has not indicated its plans for coverage. Private payers will be under intense pressure to pay for the treatment but may push back on the price. It's not clear yet how much patients on government or private insurance will have to pay in cost-sharing.

Insurers could try to manage the drug's costs by requiring strict conditions, including brain scans to confirm plaque, before agreeing to cover it.

Additional scans will be needed to monitor potential side effects. The drug carries a warning about temporary brain swelling that can sometimes cause headaches, confusion and dizziness. Other side effects included allergic reactions, diarrhea and disorientation.

About 6.2 million Americans have Alzheimer's, a number projected to more than double by 2050, barring breakthroughs in treatment, according to the Alzheimer's Association.

The medication is a monoclonal antibody, a protein made in the laboratory that can bind to substances -- in this case, clumps of amyloid beta. It is designed to trigger an immune response that reduces plaque.

The drug was tested in people with the earliest stages of disease -- those with mild cognitive impairment or early-stage dementia who had undergone testing to confirm the presence of amyloid clumps in their brains. Several doctors said Monday that they were preparing to offer the drug to their patients and would focus on that population in using the drug. Biogen said Monday that up to 2 million people in the United States might be eligible for the treatment.

Although Biogen studied the drug in people with mild dementia or early-stage Alzheimer's, the FDA label approved the drug for anyone with Alzheimer's, a wide-ranging population given that doctors have broad leeway in diagnosing the condition.

Peter Stein, director of the Office of New Drugs in the FDA's drug center, said in an interview that there was "no particular reason" why the reduction of amyloid clumps would benefit patients at one stage of the disease and not others, adding that physicians should discuss the medication with their patients and decide on the best course.

"The FDA is empowering the physician to make the decision on diagnosis," Biogen CEO Michel Vounatsos said in an interview.

Ronald Petersen, director of the Mayo Clinic's Alzheimer's Disease Research Center, called the FDA's conditional approval "a good outcome to a complicated situation." He said the decision means patients will be able to receive the treatment outside clinical trials but that because of the "equivocal nature" of the efficacy data, the company will have to conduct another trial proving the therapy works.

If the FDA had required such a trial before granting approval, he said, the drug would not have been available to patients outside the studies for another three to five years, an outcome he viewed as undesirable. He also predicted that Aduhelm will be just one element in an anti-Alzheimer's arsenal in the coming years as researchers develop combinations that are more effective than single medications.

Jason Karlawish, a neurologist at the University of Pennsylvania's Perelman School of Medicine, had a starkly different view. He wrote in a May 30 column for Stat News, a news site that covers medicine and health, that he would not prescribe aducanumab if approved, saying the data was incomplete and that the therapy had not been properly studied.

On Monday, after the FDA announcement, he expressed continued reservations about the drug but said he would discuss it with his patients and respect their choices. But he added that some patients and colleagues had expressed discomfort about the FDA's decision, saying evidence that lowering amyloid and improving cognition was thin. And he said he was concerned it would be difficult to conduct the follow-up study on the drug once it is widely available outside clinical trials.

The FDA has used its accelerated approval program many times for cancer drugs. It has cleared therapies, for example, that shrink tumors and then has required follow-up study showing whether the drugs improve survival. But getting pharmaceutical companies to comply with mandates to conduct the post-approval studies has at times been difficult, and the agency has sometimes been slow to yank approved drugs from the market even when the follow-up studies fail or aren't completed.

Researchers don't fully understand what causes Alzheimer's, but there's broad agreement that the brain plaque targeted by aducanumab is just one contributor. Evidence suggests family history, education and chronic conditions such as diabetes and heart disease may all play a role.

But that meant a difference of just 0.39 on an 18-point score of cognitive and functional ability. And it's unclear how such metrics translate into practical benefits, such as greater independence or ability to recall important details.

The FDA's review of the drug has become a flash point in long-standing debates over standards used to evaluate therapies for hard-to-treat conditions. On one side, groups representing Alzheimer's patients and their families say any new therapy -- even one of small benefit -- warrants approval. But many experts warn that green-lighting the drug could set a dangerous precedent, opening the door to treatments of questionable benefit.

The approval came despite a scathing assessment in November by the FDA's outside panel of neurological experts. The group voted "no" on a series of questions about whether reanalyzed data from a single study submitted by Biogen showed the drug was effective.

Biogen halted two studies in 2019 after disappointing results suggested aducanumab would not meet its goal of slowing mental and functional decline in Alzheimer's patients.

Several months later, the company reversed course, announcing that a new analysis of one study showed the drug was effective at higher doses and that the FDA had advised that it warranted review. Company scientists said the drug's initial failure was due to some patients not receiving high enough doses to slow the disease.

But the changes to dosing and the company's after-the-fact analysis made the results hard to interpret, raising skepticism among many experts, including those on the FDA panel.

The FDA isn't required to follow the advice of its outside panelists and has previously disregarded their input when making similarly high-profile drug decisions.

Information for this article was contributed by Laurie McGinley of The Washington Post; and by Matthew Perrone, Lauran Neergaard and Tom Murphy of The Associated Press.