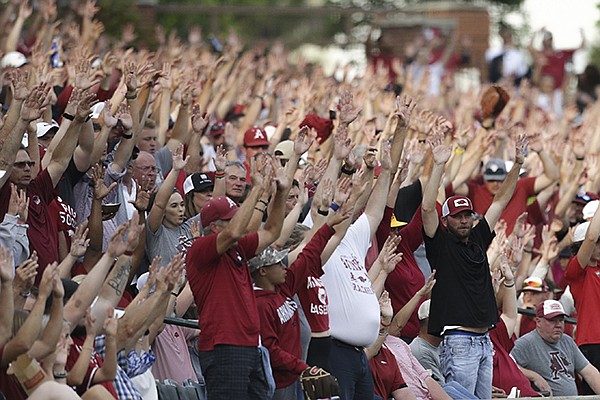 Arkansas fans cheer during an NCAA regional game against Nebraska on Monday, June 7, 2021, in Fayetteville.

The best-of-three-game super regional at Baum-Walker Stadium will match up Arkansas and North Carolina State. The winner will advance to the College World Series in Omaha, Neb.

The teams are scheduled to play their second game Saturday at 2 p.m. The first game will be televised by ESPNU and the second game by ESPN2.

A third game would be played Sunday at 5 p.m., if necessary, on either ESPN2 or ESPNU. Times and networks are subject to change.

6 things to know about NC State

The Razorbacks (49-11) are the No. 1 seed in the NCAA Tournament and advanced with a 6-2 victory over Nebraska on Monday in the regional championship.

NC State (33-17) defeated Louisiana Tech 14-7 on Sunday to win the Ruston (La.) Regional. The Wolfpack were undefeated during the regional with two victories over Louisiana Tech and one win over Alabama.

NC State was ranked No. 17 in the final USA Today Baseball Coaches Poll of the regular season. The Wolfpack finished second to Notre Dame in the ACC standings and lost to Duke in the championship game of the ACC Tournament.

Arkansas is looking to advance to the College World Series for the third consecutive postseason. NC State has not been to Omaha since 2013.