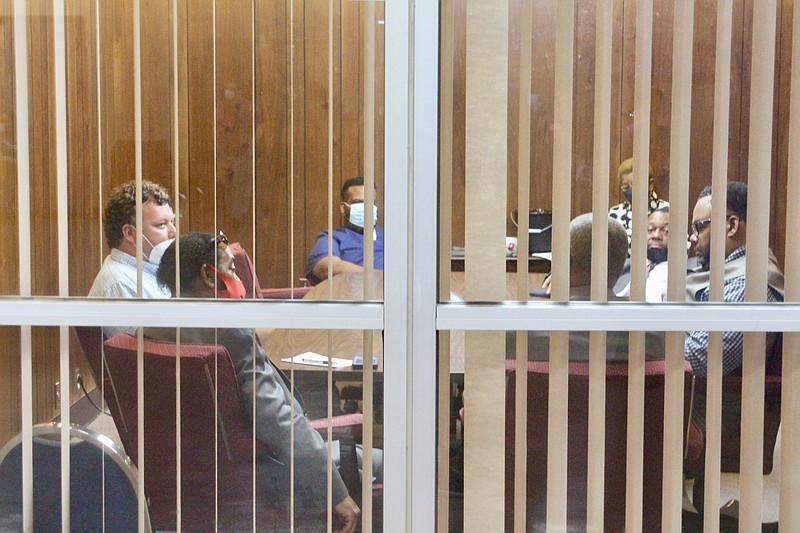 The Pine Bluff City Council upheld a recommended suspension of an animal control officer who was alleged to have been caught on camera beating a dog with a catchpole. It was also announced at the meeting that the city had received more than $8 million in coronavirus relief funding.

The animal control issue came up at a recent committee meeting, where some interest arose in hearing directly from the officer, Gary Wilson. Animal Control Director Marcus Graydon had recommended Wilson for the suspension. The matter at the committee level was passed along to the full council for its consideration.

According to Alderman Lloyd Holcomb Jr., Wilson was observed on camera beating a dog recently. Wilson, who has been an officer since late 2017, was also said to have been involved in an incident on March 23, 2021, in which an animal was fatally shot by a Pine Bluff police sergeant.

Councilmember Steven Mays, who said at the committee meeting that he wanted to hear Wilson's side of the story, was absent Monday night.

The council went into executive session, and upon coming back into open session, they voted to uphold the disciplinary action. Wilson did not attend the council meeting.

The city of Pine Bluff was awarded $8,022,200 from the Coronavirus State and Local Fiscal Recovery Fund American Rescue Plan.

The city is expecting to receive another $8 million in the latter part of next year.

According to Mayor Shirley Washington, the city is waiting for guidance from the government on how the funds can be spent, but she said the city has a wish list of more than 20 items.

Also at the council meeting, several resolutions and ordinances were passed.

A resolution authorizing the mayor to submit a grant application to the Delta Regional Authority for rehabilitation funds to restore the city-owned Bank of America building on Fifth Avenue and Pine Street was approved by the council.

The building, which was leased last year to Saracen Casino and is now under contract with PeopleShores, needs work, which, according to Mayor Shirley Washington, has to be done for PeopleShores to move in.

Tyson Poultry Inc. will participate in the Tax Back Program, a resolution the city council approved Monday endorsing the business' participation.

According to the resolution, the local government must authorize the refund of local sales and use tax as provided in the Consolidated Incentive Act of 2003.

Tyson Poultry Inc, located at 5505 Jefferson Parkway, will participate and has requested benefits accruing from the cost of construction and equipment.

The Department of Finance and Administration will be authorized to refund local sales and use taxes to Tyson Poultry Inc. through the law.

The resolution to approve the acceptance of the coronavirus state and local fiscal recovery funds was approved by the council members.

After weeks of city hall employees working in hot conditions due to a malfunctioning chiller, an ordinance was passed waiving competitive bidding and authorizing an agreement with Powers Mechanical Service Co. to acquire and install a new chiller.

According to Washington, the current chiller was seven years old and the warranty had expired earlier in the year.

Temperatures in the building reached up to 91 degrees.

The money will come from the special projects fund, according to Washington.

Guest speakers of the evening expressed concerns on non-agenda items at the end of the council meeting Monday night.

Dr. Margaret Boyd-Owens, a downtown business owner, said her business has suffered due to the prolonged Streetscape project.

Speaking on behalf of her fellow downtown entrepreneurs, Owens said that since 2018 she has encountered many issues because of Streetscape.

"I have been unable to maintain my business," she said. "I have now suffered emotionally, professionally...and financially.

Owens pleaded to the council for help, suggesting restitution be paid.

"It hurts as an entrepreneur, small business, and minority owner," said Owens. "My desire is if I could just be compensated in some means. I don't have a building anymore. All of my belongings and merchandise are gone-- destroyed due to the fact of the debris and dust."

Councilmember Ivan Whitfield said he brought the concern up to the city attorney last month and was advised the city couldn't use city tax funds to help.

He said he didn't know if any of the grant money that the city would be receiving could be used, but he would look into it.

"I have been very patient these last three years," said Owens.

Bernard Bivins then spoke on the inaccessible restrooms in Pine Bluff parks.

"The problem we have now is the restrooms are not accessible at Townsend Park, MLK Park and the one at Regional Park and Saracen Landing is open until 4 o'clock and closed on weekends," said Bivens. "My concern is when we have all these visitors come from out of town, they go to the park. The children have nowhere to go relieve themselves."

According to council member Glen Brown Sr., the public bathrooms have continually been clogged up with rolls of toilet tissue, creating unsanitary conditions when people continue using the toilets.

"I know it's a problem," said Brown. "This is the only way we can deal with it is to lock them up. I'm sorry it has to be this way. We can't always babysit those bathrooms."

Councilmember Joni Alexander said at the last Public Safety meeting the bathroom issue was brought up.

"We've had an issue of homelessness and people using those restrooms, and I just want the citizens to understand, a lot of times when we do stuff, it's not to purposely hurt you or make things inconvenient," said Alexander. "Don't assume the worst. There's always a reason for it."

Bivens suggested hiring someone to attend and monitor the restrooms.

Whitfield was tasked with looking for solutions as chair of the Public Works Committee.