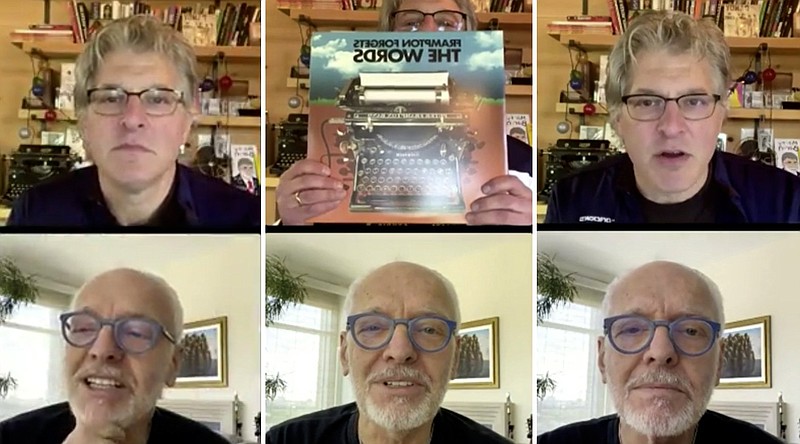 A compilation photo shows the author interviewing rocker Peter Frampton via Zoom. Although Frampton is slowing down due to an illness, he still wants to perform. (The Washington Post)

Like so many, arts reporter Geoff Edgers has been grounded by the pandemic. So he decided to launch an Instagram Live show called "Stuck With Geoff" from his barn in Massachusetts.

So far, his guests have included Jamie Lee Curtis, Anthony Fauci and Yo-Yo Ma, among others. Recently, Edgers chatted with musician Peter Frampton. Here are excerpts from their conversation.

There were, at times, two different images of Peter Frampton. One is the guy onstage with the beautiful clothes, the hair. Then there was the other guy, the serious musician, who we get to hear more and more of as you make more records.

Let's see, how do I put this. Coming from Humble Pie, where we were basically a jam band, a heavy jam band, rock 'n' roll with a little blues and R&B and rock, all mixed together with a little jazz as well. But I would write acoustic things, I would write electric things, and so would Steve Marriott, the better singer of all of us. We would both write really heavy stuff, but also common types of songs, more acoustic type of songs. "Are You Gonna Go My Way," which is on the new (instrumental) record ("Frampton Forgets the Words"), is very heavy. But there's also a track called "Maybe" right after that, which is very demure and a very beautiful song. I like all ... types of music.

I think I also mean what happens when you become so popular; it changes how people see you and what's expected of you.

I guess that happened after "Frampton Comes Alive." I didn't want to make the next record because now I was the golden goose. I had just become the biggest-selling artist in history in America. And so everybody thought, "Well, we should get him to lay a few more of these golden eggs." So me being 26, 25 when we recorded "Comes Alive," all of a sudden I was this worldwide star. It was a very scary place to be.

At some point, didn't Pete Townshend call you up about joining the Who?

It was about '82, and it was a rough period for me. I didn't have a record label. They dropped me. Everything was toppling in, and I get a call. It's Pete. He goes, "I've got this idea. I don't think I want to tour with the Who anymore, but I want you to be the one that tours. And I'll write the songs and you'll be onstage. Don't worry, I'll be around you." And I said, "It's a terrible idea. My arm doesn't go as high as yours with the thing, you know, round your head. And I can't jump that high. Have you spoken to the others about this?" Then a week goes by, and I'm getting hard to live with, and at the end of the third week, smoke's coming out of my ears. My wife says, "Why don't you call him up?" So I said, "Hello, Pete." And he goes, "Oh, Pete, how are you?" That's all I allowed him to get out. You don't get back to me for three weeks. What's going on? And he apologized. And obviously he never brought it up to Roger (Daltrey) or John (Entwistle), because I did a tour with Roger later, and I told him about it. And he said, "Well, that wouldn't have worked, would it?" I said, "No, it wouldn't."

You've been very open about what you're dealing with physically. You have IBM, or inclusion body myositis. Can you describe it?

Nine years ago or maybe eight years ago, I went on a father-son trip to Big Sur. I said, "Julian, come on, let's go away for the weekend and take our guitars and write." And then one day I'm hiking up the hill and my son just overtakes me at like 90 mph. That was the beginning of it. And then a couple of years went by and I realized I was playing Frisbee with the guys backstage, and I couldn't get to the Frisbee in time because my legs wouldn't get me there. Then maybe another year or two went by and I fell onstage. Then three weeks later, I fell again. I went to see my doctor, who said, "You need to see a neurologist. I think I can diagnose you right now with IBM." I had a muscle biopsy, which confirmed the diagnosis. But I'm lucky. I have a very slow case, but every day, things are degrading.

Yet when I listen to your new record, a blazing song like your cover of "Are You Gonna Go My Way," I don't detect anything. Can you tell something is different?

Well, that was the reason I wanted to record so much in a short space of time because I didn't know. Two years ago, when we did the recordings, I was feeling pretty good. But over the last couple of years, things are not as good anymore, unfortunately, especially my legs. It's now starting to affect my hands. But two years ago, I was still at the top of my game. Right now, I don't know where I am.

There are so many examples of artists with a physical ailment. Roland Kirk, who used to be able play three saxophones at once, was dealing with a stroke and there was still a beauty to his playing. Do you want to get back out there with your band?

I would love to go back on the road. But it all depends. I'm doing OK right now, but it's definitely not as good as the last time I toured. I've learned that I prefer to play, put more soul into less notes and to experiment that way. I really feel that this album is a showcase of my feelings, my emotions that have come out through my guitar. I've often said I have two voices, and I think my guitar voice is the better of the two. It wasn't a big decision to do an instrumental record, put it that way, because I love playing instrumentals so much. And, you know, the only album I put out that I got a Grammy for was "Fingerprints," which was an instrumental, too. So now I'm believing this album's got a lot of critical acclaim and fan acclaim already. I'm thinking what they're telling me is don't ever sing again.