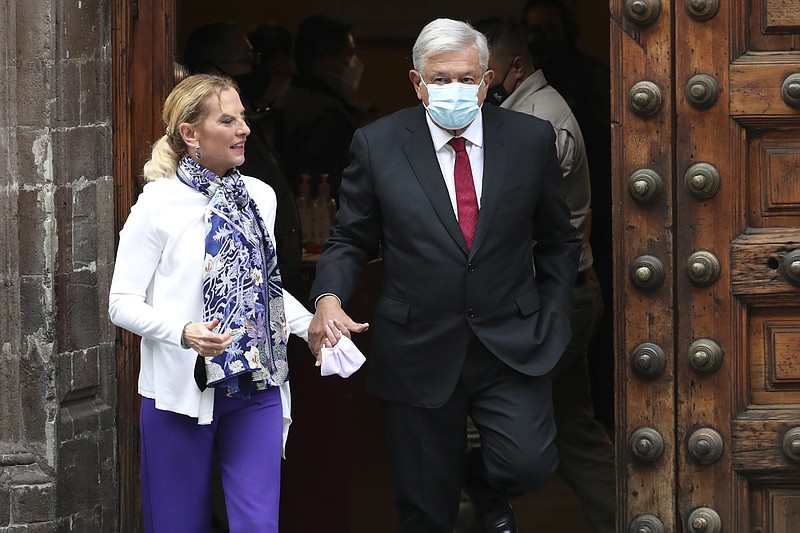 Mexican President Andres Manuel Lopez Obrador, right, wearing protective face masks to help curb the spread of the coronavirus, and first lady Beatriz Gutierrez walk away after voting in Mexico City, Sunday, June 6, 2021. Mexicans on Sunday were electing the entire lower house of Congress, almost half the country's governors and most mayors in a vote that will determine if Obrador's Morena party gets a legislative majority. (AP Photo/Marco Ugarte)

MEXICO CITY -- President Andres Manuel Lopez Obrador's party and its allies on Monday appeared poised to maintain their majority in Mexico's lower chamber of the congress, but fell short of a two-thirds majority as some voters boosted the struggling opposition, according to initial election results..

Lopez Obrador's Morena party will have to rely on votes from its allies in the Workers Party and Green Party, but together they were expected to capture between 265 and 292 seats in the 500-seat lower house. Morena alone was expected to win 190 to 203 seats, according to preliminary vote counts.

[Video not showing up above? Click here to watch » https://www.youtube.com/watch?v=kuOF4AVIG98]

That would signal a significant decline for the president's party. In the current congress, Morena has a simple majority, holding 253 seats on its own. It would also deprive the president of a qualified majority of two-thirds required to approve constitutional reforms.

Lopez Obrador appeared to acknowledge that new reality Monday. He praised the election as "free, clean" and said Mexicans had shown a degree of political maturity "never seen."

"You voted for two different and opposed plans, above all in the federal election," he said. "Those of the transformation plan are going to have the majority in the Chamber of Deputies and this means guaranteeing the sufficient budget for the most in need."

The results give the president sufficient budgetary control to continue his train and refinery-building plans and cash handout programs. But they may deny him congressional backing to escalate his ongoing spats with the courts and regulatory agencies, which have blocked some of his tougher proposals to empower state-owned industries and boost fossil fuels.

Opponents have said Lopez Obrador is trying to dismantle checks and balances created during Mexico's decades-long transition to full democracy.

"The voters have given a mandate that says 'I am not writing a blank check for any of the movements in Mexico,'" said Luis Miguel Perez Juarez, a political science expert at the Monterrey Technological university.

The opposition alliance made up of the Institutional Revolutionary Party, National Action Party and Party of the Democratic Revolution were estimated to win between 181 and 213 seats. Those would be gains for those parties, which have often appeared rudderless in the face of Lopez Obrador's popularity and which still face the challenge of coming up with a platform based on something other than just opposition to the president.

Even without Lopez Obrador on the ballot, the midterm elections were seen by many as a referendum on his administration and his ability to continue what he calls the "Fourth Transformation" of Mexico. Turnout was high for midterm elections, edging above 51% of eligible voters.

Lopez Obrador's party did better than expected in state governors' races, and appeared headed for wins in at least 10 of the 15 states up for grabs.

"It's an enormous achievement on the part of the president and his party's coalition to have ratified their absolute majority, and to have won the election in spite of the Mexican economy going down as it has over the last three years ... and the pandemic," said Carlos Heredia of Mexico's Center for Economic Research and Training.

At the same time, the votes means Lopez Obrador will have to listen more to the opposition, which he has traditionally dismissed as conservatives defending the vested interests and corruption of the past.

But the president's party was battered in Mexico City, long considered his stronghold and where he once served as mayor. The capital suffered more than many other areas during the coronavirus pandemic.

While voting was disrupted at only a handful of polling places on Sunday, violence marked the campaign and the days leading up to the vote. Nationwide, three dozen candidates were killed during the campaigns.

Almost all of the victims were running for one of the 20,000 local posts including mayors and town council up for grabs in 30 states. In Guanajuato state, Mexico's most violent, a woman who stepped in as mayoral candidate after her mother was murdered won an overwhelming victory in the town of Moroleon.

Information for this article was contributed by Manuel de la Cruz of The Associated Press. 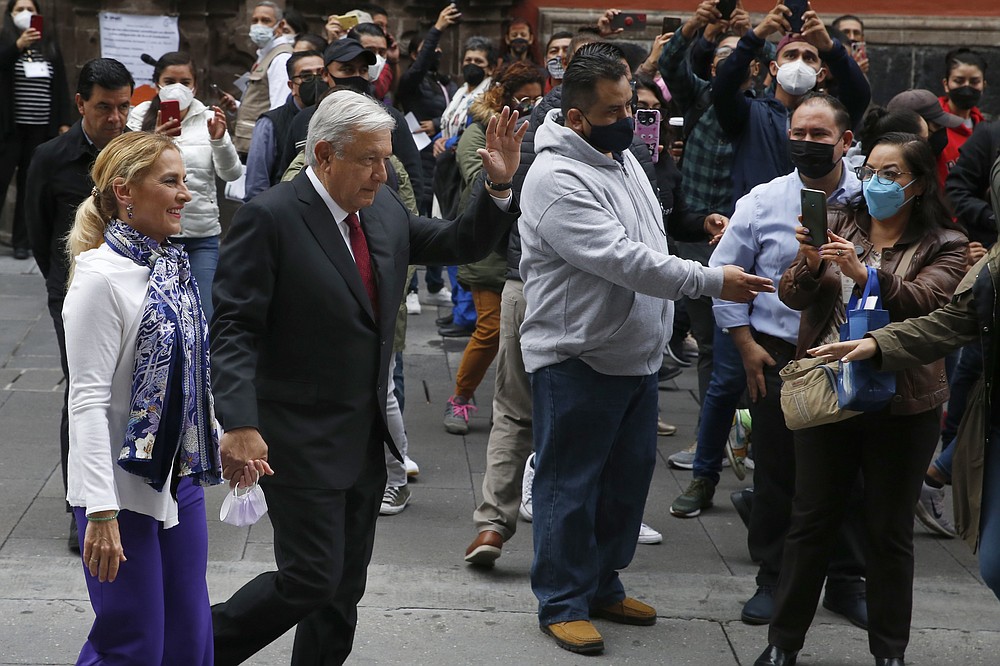 Mexico's President Andres Manuel Lopez Obrador waves to supporters as he walks with first lady Beatriz Gutierrez after voting in congressional, state and local elections in Mexico City, Sunday, June 6, 2021. Mexicans on Sunday were electing the entire lower house of Congress, almost half the country's governors and most mayors in a vote that will determine if Obrador's Morena party gets the legislative majority. (AP Photo/Marco Ugarte) 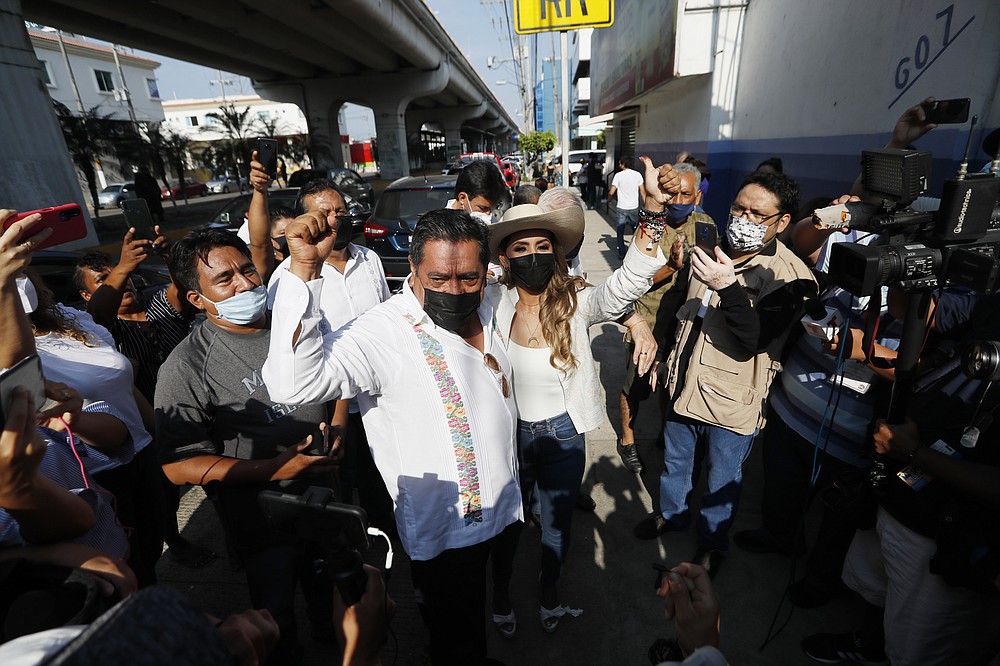 Evelyn Salgado, right, and her father Felix Salgado Macedonio thumb ap after she voted in mid-term elections in Acapulco, Mexico, Sunday, June 6, 2021. Evelyn Salgado runs for governor of the Guerrero state with the ruling Morena party in place of her father, whose candidacy was canceled by an electoral court for violations to campaign spending rules, following months of protests over allegations of rape against him. (AP Photo/Fernando Llano) 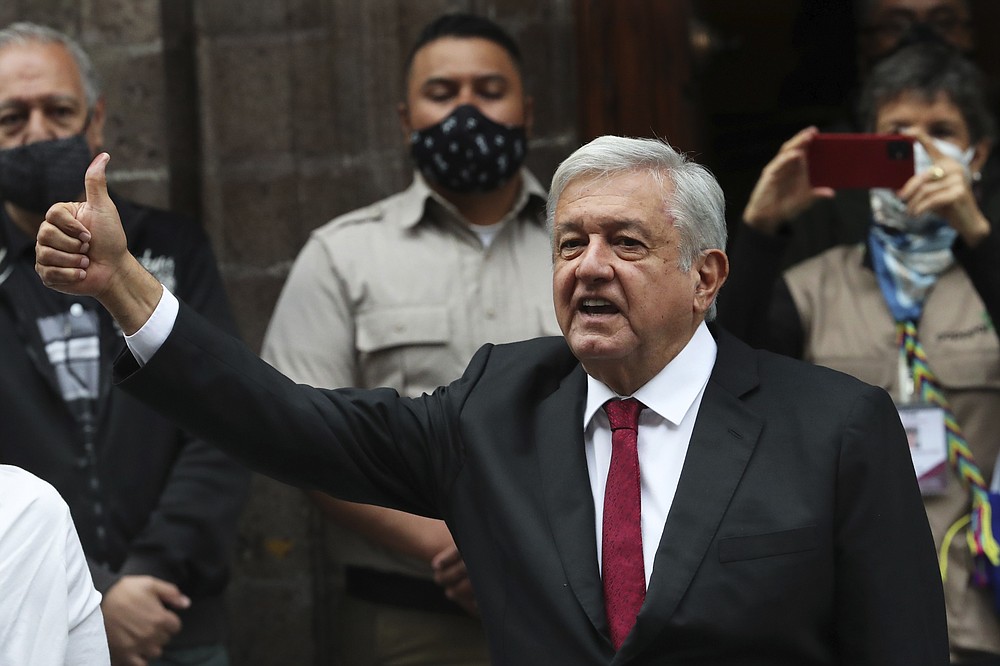 Mexico's President Andres Manuel Lopez Obrador thumbs up after voting in congressional, state and local elections in Mexico City, Sunday, June 6, 2021. Mexicans on Sunday were electing the entire lower house of Congress, almost half the country's governors and most mayors in a vote that will determine if Obrador's Morena party gets the legislative majority. (AP Photo/Marco Ugarte) 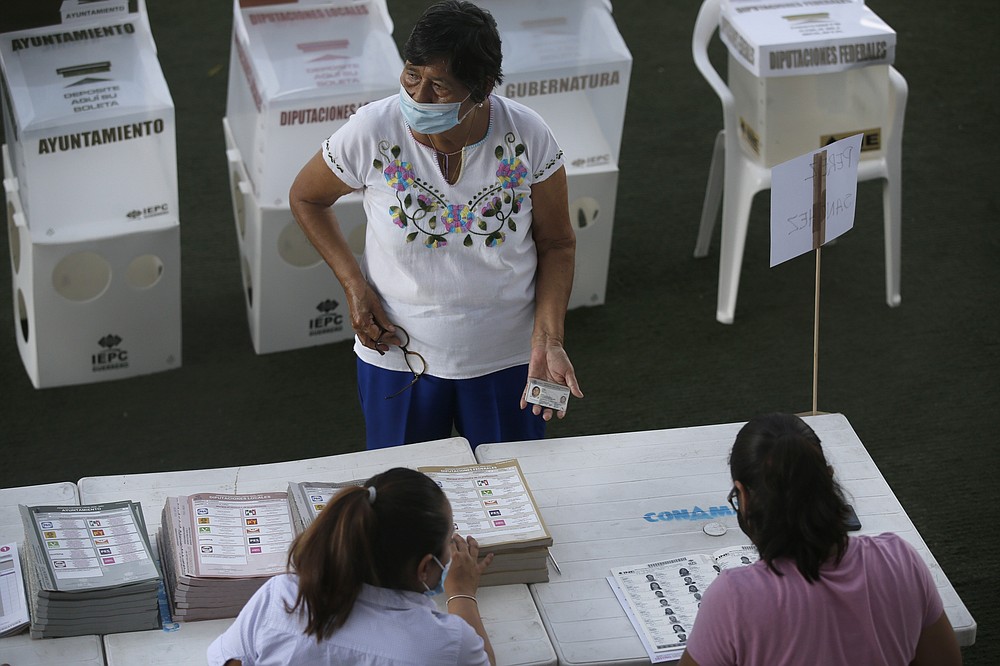 A woman shows her ID before voting in Acapulco, Mexico, Sunday, June 6, 2021. Mexicans are electing the entire lower house of Congress, almost half the country's governors and most mayors. (AP Photo/Fernando Llano)
ADVERTISEMENT