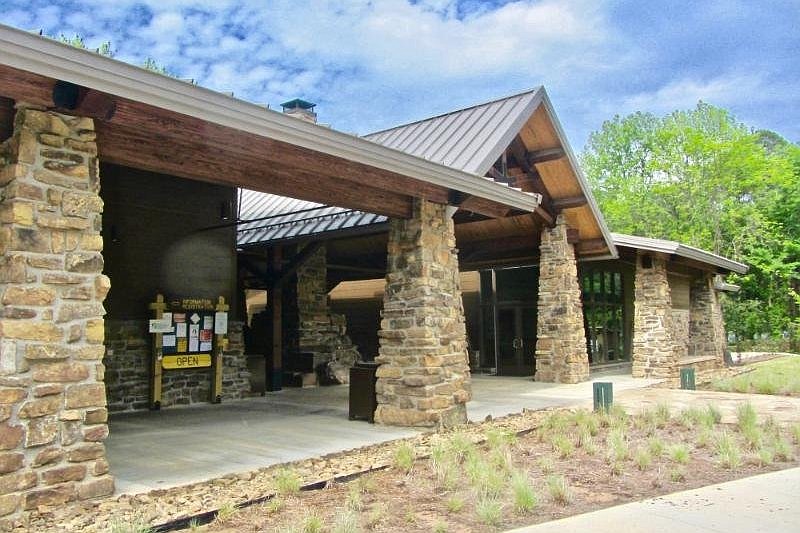 Dr. T.W. Hardison Visitor Center, on the Lake Bailey shore, honors the country doctor who spearheaded Petit Jean State Park's creation 98 years ago by the General Assembly. Named for a fictive French maiden who dressed as a boy to accompany her beloved sailor to America, Petit Jean became the progenitor of today's thriving 52-park system, considered one of the nation's finest.

Replacing the somewhat spartan previous center, the new 11,700-square-foot multi-use facility was designed by Fennel Purifoy Architects and built by Kinco Constructors. Cost ran close to $7 million. Funding came via the Amendment 75 Conservation Fund and a grant from the Arkansas Natural and Cultural Resources Center. Most exhibits are interactive, to encourage learning with hands and minds. 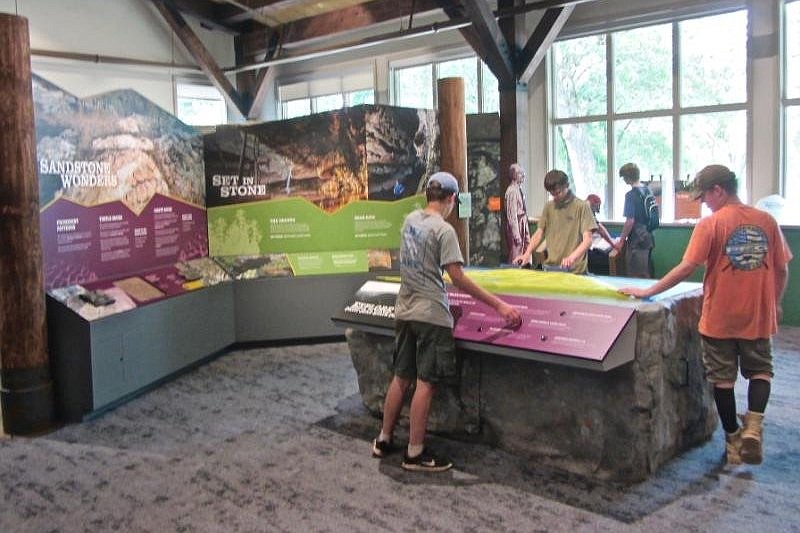 Visitors are greeted outdoors by a life-size bronze statue of Hardison. To the right of the main entrance, they can admire a large outdoor fireplace made from native stone. Some of the stone was salvaged from the demolished Hardison Hall, which had been constructed along with other park buildings in the 1930s by the federal Civilian Conservation Corps.

Having entered through a capacious gift shop, visitors pass under an eye-catching reproduction of the Natural Bridge, a distinctive geological feature along Petit Jean's Seven Hollows Trail. That wrinkle gives a sense of having stepped back outdoors.

In the 2,000-square-foot exhibit gallery, as described by park chief interpreter Kelly Farrell, "guests will find explanations of the park's unique geology, hear mini-podcasts about park history and nature, and have a hands-on experience learning about wildlife and native plants. The exhibits are designed for all ages with many hands-on tactile experiences." 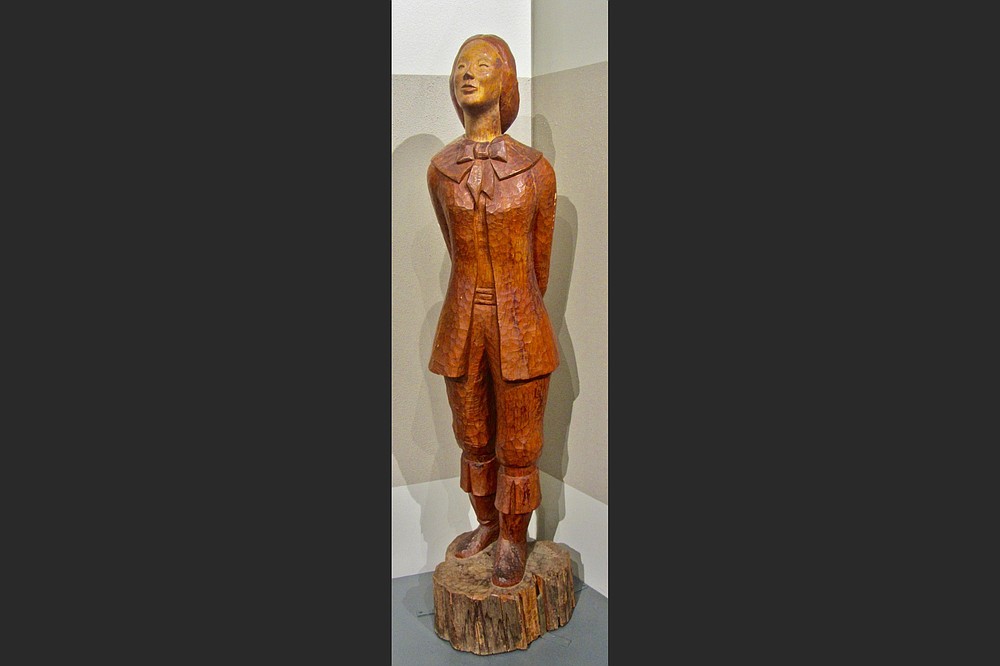 A statue gives a sense of the legendary Petit Jean’s appearance in men’s garb. (Special to the Democrat-Gazette/Marcia Schnedler)

Accessibility was a factor in the gallery design by Taylor Studios, as the Arkansas Democrat-Gazette's Karen Martin reported in a recent Perspective column. An audio-description tour is being created for guests who are blind or have diminished vision. Similar to those at two other recently built state-park visitor centers, the feature will provide spoken accounts conveying what is shown in the exhibits.

There's also an audio program for general use, touted on a sign with the headline: "Look, Listen and Reflect." Tuned to digital-age mindsets, it offers "a rich multi-sensory experience" for "sharpening your listening skills to help you make the most of your time here. Think of this audio station like a dynamic and diverse 'playlist' of the park — including ambient nature sounds, wildlife calls, and even personal reflections from park rangers." 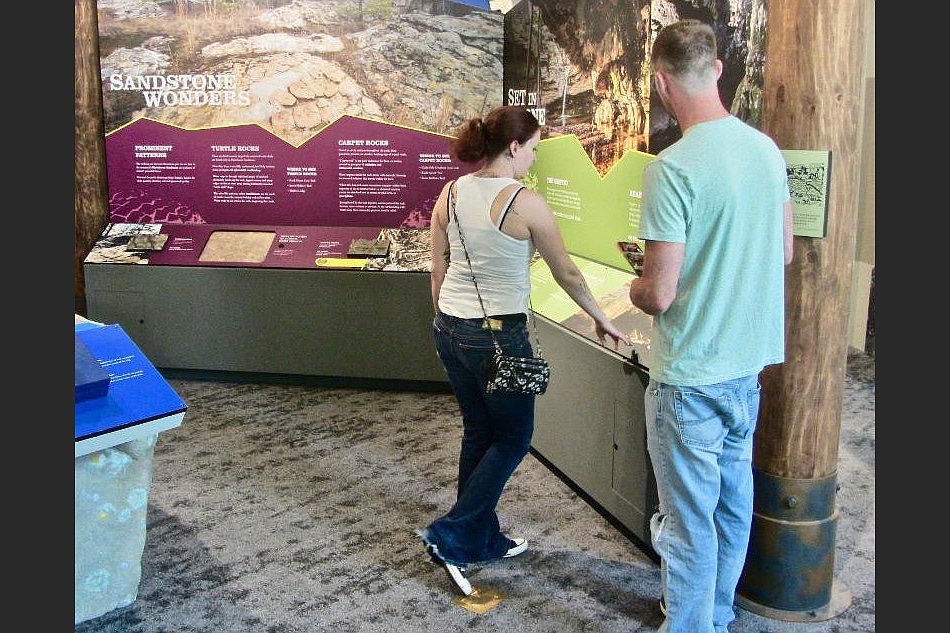 Rock structures in the Petit Jean vicinity are viewed by park visitors. (Special to the Democrat-Gazette/Marcia Schnedler)

A posted quote from Hardison, who died in 1957, captures a more timeless frame of mind that the new visitor center and Petit Jean's 20-plus miles of hiking trails might well inspire:

"I enjoy nothing more than a walk along a winding mountain trail, a hiking stick in my hand and one of my shepherd dogs at my heel. If the wind blows cold through the boulder-strewn forest, so much the better. What adventure may not await me at the next turn of the trail." 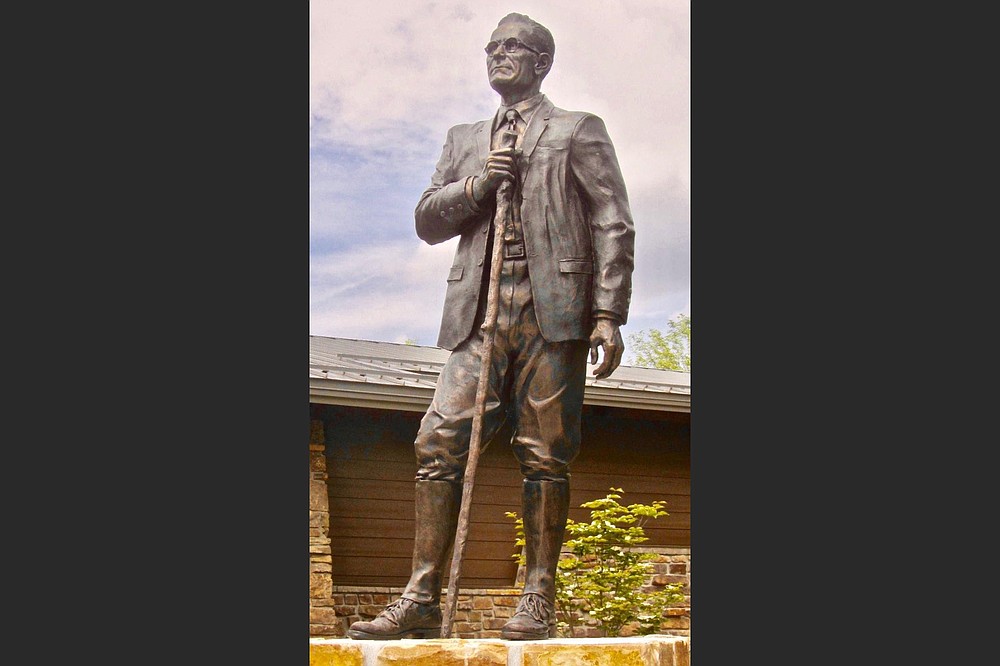 A life-size statue honors Dr. T.W.Hardison outside the visitor center. (Special to the Democrat-Gazette/Marcia Schnedler)
ADVERTISEMENT