No-women draft is left to Congress 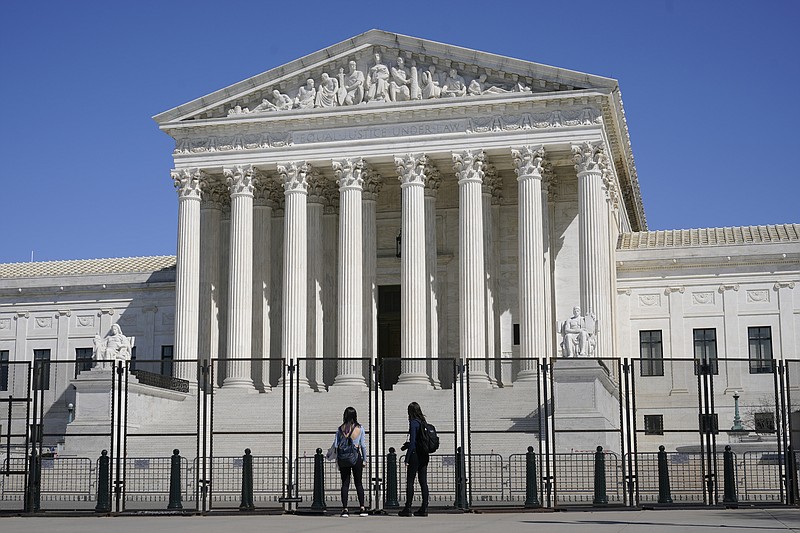 FILE - In this March 21, 2021, file photo people view the Supreme Court building from behind security fencing on Capitol Hill in Washington after portions of an outer perimeter of fencing were removed overnight to allow public access. A Supreme Court case being argued this week amid March Madness could erode the difference between elite college athletes and professional sports stars. (AP Photo/Patrick Semansky, File)

WASHINGTON -- The Supreme Court on Monday declined to hear a challenge to a federal law that requires only men to register for the military draft.

[Video not showing up above? Click here to watch » https://www.youtube.com/watch?v=YVYlndnL5z8]

As is the court's custom, it gave no reason for turning down the case. But three justices issued a statement saying Congress should be allowed more time to consider what they acknowledged was a significant legal issue.

"It remains to be seen, of course, whether Congress will end gender-based registration under the Military Selective Service Act," Justice Sonia Sotomayor wrote in the statement, which was joined by Justices Stephen Breyer and Brett Kavanaugh. "But at least for now, the court's long-standing deference to Congress on matters of national defense and military affairs cautions against granting review while Congress actively weighs the issue."

The requirement is one of the last sex-based distinctions in federal law, one that challengers say cannot be justified now that women are allowed to serve in every role in the military, including ground combat. Unlike men, though, they are not required to register with the Selective Service System, the government agency that maintains a database of Americans who would be eligible for the draft were it reinstated.

The unequal treatment "imposes selective burdens on men, reinforces the notion that women are not full and equal citizens, and perpetuates stereotypes about men's and women's capabilities," lawyers with the American Civil Liberties Union wrote in a petition on behalf of two men who were required to register and the National Coalition for Men.

In 1981, in Rostker v. Goldberg, the Supreme Court rejected a sex-discrimination challenge to the registration requirement, reasoning that it was justified because women could not at that time serve in combat roles.

"Since women are excluded from combat service by statute or military policy," Justice William Rehnquist wrote for the majority, "men and women are simply not similarly situated for purposes of a draft or registration for a draft."

On Monday, Sotomayor wrote that "the role of women in the military has changed dramatically since then."

"Beginning in 1991," she wrote, "thousands of women have served with distinction in a wide range of combat roles, from operating military aircraft and naval vessels to participating in boots-on-the-ground infantry missions."

Lower courts had agreed with that assessment.

In 2019, Judge Gray Miller of U.S. District Court in Houston ruled that since women can now serve in combat, the men-only registration requirement was no longer justified. A unanimous three-judge panel of the 5th U.S. Circuit Court of Appeals in New Orleans agreed that "the factual underpinning of the controlling Supreme Court decision has changed." But it said only the Supreme Court could overrule its own precedent.

The Trump administration defended the differing registration requirements in the appeals court. The Biden administration urged the Supreme Court not to hear the case, National Coalition for Men v. Selective Service System, No. 20-928, but it did not defend the constitutionality of the law. Instead, it asked the justices to give Congress more time to consider the matter.

Last year, a congressional commission concluded that expanding the registration requirement to women was "a necessary -- and overdue -- step" that "signals that both men and women are valued for their contributions in defending the nation." That echoed recommendations from military leaders. But Congress, which has long been studying the question, has yet to act.

The government has not drafted anyone since the Vietnam War, and there is no reason to think that will change. The challengers said that was a reason for the court to act now, before a crisis arises.

Ria Tabacco Mar, director of the American Civil Liberties Union's Women's Rights Project, who had urged the court to take up the issue, said requiring men to register imposes a "serious burden on men that's not being imposed on women."

Men who do not register can lose eligibility for student loans and civil service jobs, and failing to register is also a felony punishable by a fine of up to $250,000 and five years in prison. Eight states do not let men enroll in public universities unless they have registered.

But Tabacco Mar said the male-only requirement does more than that.

"It's also sending a tremendously harmful message that women are less fit than men to serve their country in this particular way and conversely that men are less fit than women to stay home as caregivers in the event of an armed conflict," said Mar, who represents the National Coalition For Men and the two individual men who challenged the law. "We think those stereotypes demean both men and women."

Even if the draft is never used again, retaining the requirement sends a "really damaging message," she said. On Monday, she urged Congress in a statement to "update the law either by requiring everyone to register for the draft, regardless of their gender, or by not requiring anyone to register."

A group of retired military officers, along with the Center for Military Readiness, urged the court to deny review, saying the 1981 precedent was sound.

The brief said Congress rather than the court should decide who must register. It added that the challengers "also fail to address the elephant in the room: Men, as a group, are stronger, bigger, faster and have greater endurance than women as a group."

Another group of retired military officers -- including Michael Hayden, who directed both the CIA and the National Security Agency; Stanley McChrystal, a former commander in Afghanistan; and Claudia Kennedy, the first woman to become a three-star general in the Army -- urged the court to hear the case.

"Including women in the Selective Service would double the pool of candidates available to draft," their brief said, "raising the overall quality of the conscripted force and enabling the nation to better meet its military needs."

Tabacco Mar said she was disappointed by the Supreme Court's decision not to hear the case and she hoped Congress will step in.

Information for this article was contributed by Adam Liptak of The New York Times and by Jessica Gresko of The Associated Press.