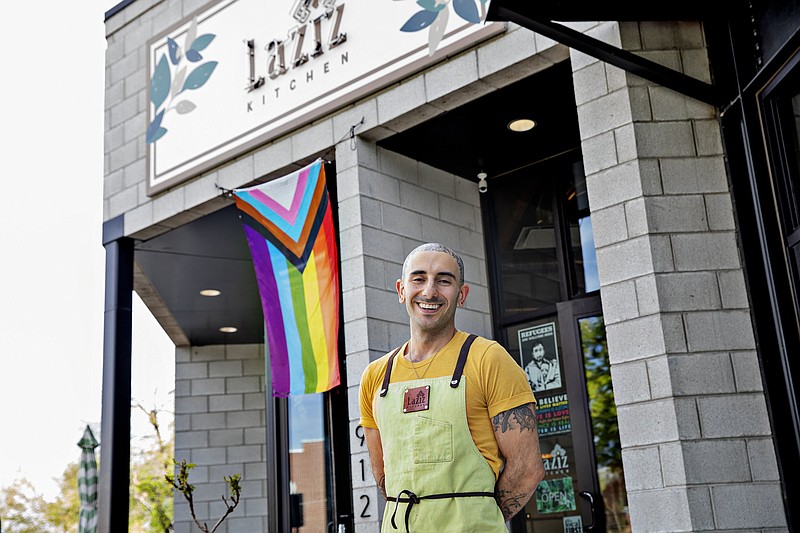 Moudy Sbeity, the founder of Laziz Kitchen in Salt Lake City, offers Middle Eastern food and a message “that we are inclusive in love.” Laziz Kitchen is one of several newer restaurants that cultivate a wide spectrum of LQBTQ customers, as symbolized by the redesigned version of the traditional rainbow flag out front. (The New York Times/Kim Raff)

Universal Grill cranked "Dancing Queen" on birthdays. There was that incredibly hot Italian waiter at Food Bar. Florent was around the corner from a notorious sex club in the meatpacking district. Manatus was so gay, it had a sobriquet: Mana-tush.

Gay restaurants, said Frankel, Tony-nominated composer of the musical "Grey Gardens," "made you feel like you belonged."

But all those places he so fondly remembers are long closed, as are Harvest, Orbit's and several others listed in an article, headlined "Restaurants That Roll Out the Welcome Mat for Gay Diners," that ran in The New York Times 27 years ago. It now reads like an obituary.

Restaurants fold all the time, perhaps nowhere more so than in New York, and perhaps never as much as during the covid-19 era. The pandemic hit the country's urban gay restaurants especially hard, said Justin Nelson, president of the National LGBT Chamber of Commerce. MeMe's Diner, a popular gay restaurant in Brooklyn, permanently closed in November, citing shutdown measures and a lack of government support.

Gay restaurants, like gay bars, are also facing crises of identity and purpose in a time that is in many ways more welcoming than the past, when gay people sought out gay restaurants because they offered safety and acceptance that couldn't be found elsewhere.

Lesbians went to Bloodroot, a still-busy vegetarian restaurant in Bridgeport, Conn., that sprang from the lesbian feminist movement of the 1970s. Gay men frequented places like Orphan Andy's, a campy diner from the same decade that's still in business in the Castro neighborhood of San Francisco. Atlanta had Waterworks, which a 1992 newsletter for the group Black and White Men Together called the city's "only Black-owned gay restaurant."

Today, many LGBTQ Americans feel free to be their full selves in almost any setting. And shifting conceptions of sexuality and gender extend beyond what words like gay, lesbian, male or female can accommodate. A gay restaurant can just sound fuddy-duddy.

"Many of the more privileged young queer people have grown up with inclusion, so they don't feel the need to be in a place where you're sheltered from heterosexism," said Julie Podmore, an urban geographer at Concordia University in Montreal.

That may be the case in New York, where gay restaurants are going the way of dinosaurs (if not yet extinct — Elmo and other spots are still keeping their gay fan base fed).

But elsewhere in the country, many gay restaurants are thriving — as treasured local businesses, de facto community centers, refuges from continuing anti-gay violence and potential paths forward for a restaurant industry in recovery. 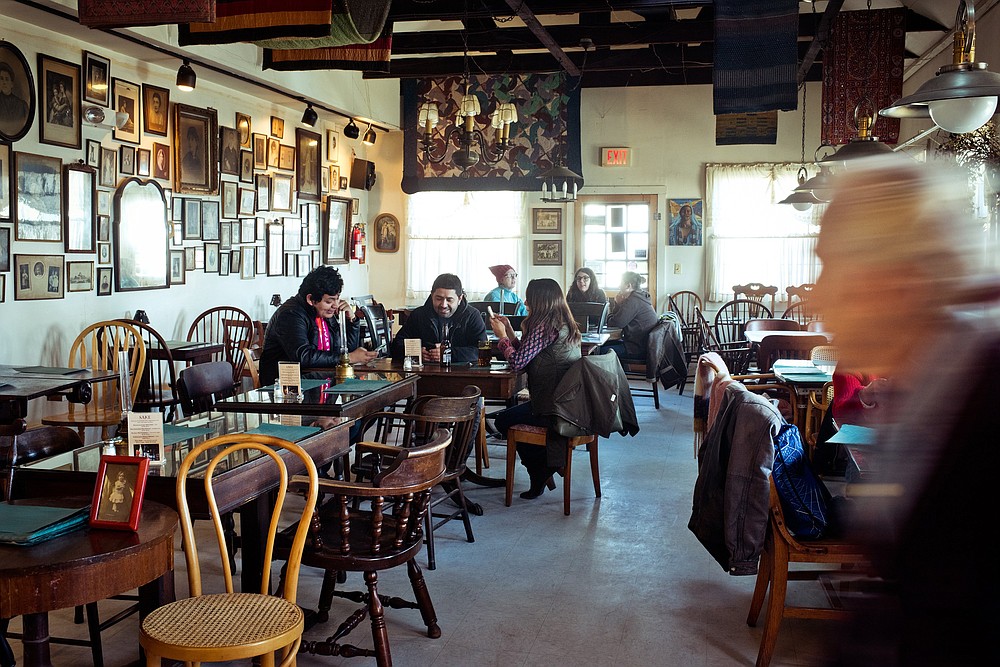 Bloodroot, a vegan and vegetarian restaurant in Bridgeport, Conn., has roots in the lesbian and feminist civil rights movements of the 1970s. Many gay restaurants have closed in a time of growing inclusion and more fluid sexual identities but in several places around the country, they remain anchors of safety and community. (The New York Times/Gabriela Herman)

AT HOME AT ANNIE'S

On a recent Saturday night in the Dupont Circle neighborhood of Washington, Annie's Paramount Steak House was busy, and it was gay. Two dads and their two kids ate at a table in an outside area festooned with rainbows. Three 20-something gay men shared fries. An older couple smiled as they watched a clip from the classic musical "White Christmas" on a phone.

Overseeing the hubbub was Georgia Katinas, the general manager, who is 33 and straight. Her grandfather, George Katinas, the son of Greek immigrants, opened Annie's in 1948 at a different location as the Paramount Steak House. Katinas says nobody in her family is gay, yet Annie's surely is. That seed was planted by her great-aunt Annie Kaylor.

Annie was beyond supportive of the gay community and became, for many of the restaurant's racially diverse diners, a mother figure before her death in 2013. In 2019, when Annie's received an America's Classics award from the James Beard Foundation, restaurant critic David Hagedorn wrote of how, in its early days, Annie "went up to two men holding hands under the table and told them they were welcome to hold hands above it."

Now that indoor dining has resumed, Katinas said, "people are coming back with tears in their eyes" because they "missed being in a space where they're not the only gay people."

Derrin Andrade and Zack Sands weren't looking for a gay restaurant when they moved to Dupont Circle four years ago. Now the biracial married couple are regulars at what Sands, 30, called "a home more than a restaurant."

"You can sense the loyalty at Annie's, and it makes you want to concede to that," he said. "You want to be part of it when you see people are coming back for a reason."

For Steve Herman, 79, who has eaten at Annie's since 1976, that reason is the fact that Dupont Circle isn't as gay as it once was.

"I think it's a great thing that gay people are more mainstream and comfortable going other places," he said. "But I miss having one neighborhood and one restaurant that was mine."

Historian George Chauncey traces gay eating places in New York back to the cheap urban dining halls that catered to unmarried workers in the late 19th century. In the 1920s and '30s, police often raided cafeterias like Horn & Hardart, where gay men gathered to "ridicule the dominant culture that ridiculed them, and construct an alternative culture," as Chauncey writes in his book "Gay New York."

In 1959, 10 years before the Stonewall riots, what historians consider the first gay uprising in modern America broke out at Cooper Donuts in Los Angeles, where LGBTQ people pushed back against a police roundup by using coffee and doughnuts as projectiles.

In the 1980s, Florent was a refuge for gay New Yorkers during the worst years of AIDS. The owner, Florent Morellet, recalled that after learning he was HIV-positive in 1987, he posted his T-cell counts on repurposed menu boards that faced the dining room — a coded message of solidarity to his customers.

"I have met many times people who said, 'Florent, you don't know me, but at that time I was positive and in the closet and didn't tell anybody,'" said Morellet, 67. "They said, 'When I came to your restaurant where you put your T-cell numbers on the board, I felt everything was OK.'" He tried to say more but choked up.

If there's a restaurant that points a way forward for gay dining, it's Laziz Kitchen, in Salt Lake City. Moudi Sbeity founded the Mediterranean restaurant in 2017 with Derek Kitchen, then his husband, who was elected to the Utah State Senate a year later.

Sbeity, 33, prefers to call Laziz a queer, not gay, restaurant to signal "that we are inclusive in love." The Pride flag flying outside is the redesigned version with stripes added for the trans community and people of color. The bathrooms are all-gender. A poster at the entrance welcomes refugees.

Not even red-state politics comes between a customer and Laziz's grilled halloumi.

Nan Seymour, a regular, swears by the hummus, beet and muhammara trio. She dines there often, sometimes with her trans daughter, and feels she should support the restaurant's mission.

"The default in our current culture is cisnormative, ­heteronormative white supremacy, and it's not safe for people who aren't in those majority privileged groups," said Seymour, her voice breaking. "It's essential for us to know that we can be at a restaurant and not worry about how it will go for my daughter when she goes to the bathroom."

Jen Jack Gieseking, an urban cultural geographer at the University of Kentucky, Lexington, said that like Laziz, future gay restaurants will be intersectional, especially about gender. Servers won't assume pronouns. Men won't necessarily be given the check.

"We'll see more consideration for how to create an anti-racism space," said Gieseking, author of "A Queer New York." "People will consider who's delivering your food and who made your food."

"Not all of these restaurants will be great," he added. "But they will be projects that make change, and that's exciting."