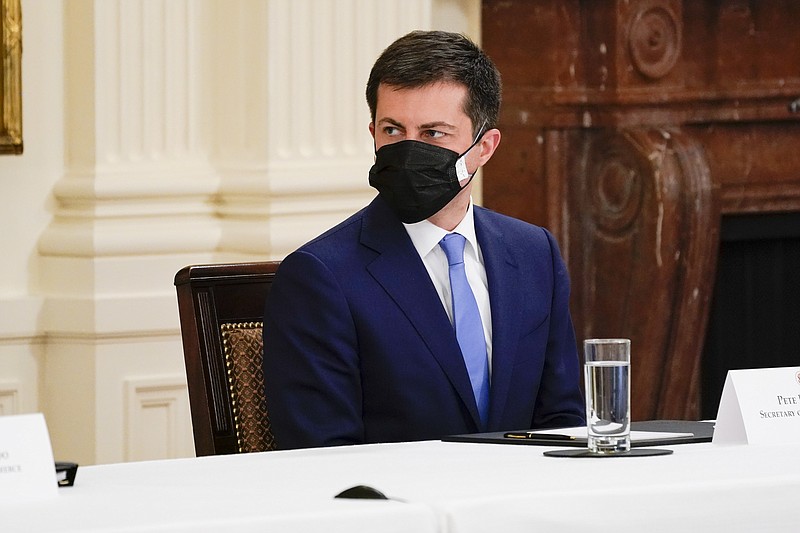 The 5-decade-old barge highway starts in Southeast Arkansas at the confluence of the White and Mississippi rivers and follows the Arkansas River west across the Natural State ending along the Verdigris River near Tulsa.

"It takes a long time to bring together a major piece of infrastructure like this, but what happened is people 50 years ago and on the way... people made a bet that investing in infrastructure would open up new economic possibility for an entire region for decades to come, and that's what we've seen," said Buttigieg, who attended the event virtually. "To this day, a world that has changed so much since 1971, we are still reaping the benefits of that bet. That's one of the reasons we believe that now is the moment to be thinking about the investments that will be paying off the next 50 years."

Panelists, moderated by state Sen. Clarke Tucker, D-Little Rock, discussed the importance of the 445-mile navigation system from the local to national level and the critical need to invest in maintaining and improving this and other U.S. inland waterways.

The system, featuring a chain of locks and dams, provides more than 55,000 jobs, brings in $8.5 billion in annual sales and serves transportation needs of a dozen states. The transportation it provides continues to be a selling point for economic development in Little Rock and the state, Scott said.

[Video not showing up above? Click here to watch » https://www.youtube.com/watch?v=L9MfeyNLxNg]

Commercial barges move freight more efficiently than trains and trucks, per ton of freight moved per mile, according to the U.S. Army Corps of Engineers. Barges also produce less noise and pollution.

"[The navigation system] created opportunities for commercial navigation, irrigation for farmlands, flood control solutions, hydro power, environmental improvements and tourism. It really impacted across the board this part of the country. What will it take for America to invest in these kinds of projects again?" Tucker asked the panelists.

All the speakers pointed out that infrastructure gets overlooked and the need to show how assets like the McClellan-Kerr Arkansas River Navigation System have been and are critical to our economic future.

"When the [McClellan-Kerr Arkansas River Navigation System] was built 50 years ago, Congress appropriated a little over a billion dollars," Day said. "I can tell you, that billion dollar investment 50 years ago equates to about $1.5 billion worth of return to central Arkansas every three to five years. That's a good return on your investment. Those are the stories we have to tell."

The system has a $225 million backlog just for the top 30 critical navigation maintenance projects, according to the Corps of Engineers Little Rock District. In his opening remarks during Monday's event, Gov. Asa Hutchinson also spoke about the need to deepen the channel's minimum depth from nine to 12 feet to increase access and the current effort to renew a study he worked on 20 years ago in Congress trying to make the increased depth a reality.

The country needs to make a generational infrastructure investment to not only maintain its current infrastructure but also be future-minded about improving the country's infrastructure that currently ranks No. 13 internationally, he said.

The ranking comes from a 2019 report by the World Economic Forum, a Swiss nonprofit, that compared 141 countries' economies. Biden's American Jobs Plan calls for a $17 billion investment in the nation's inland waterways, coastal ports, land ports of entry and ferries. It would provide $115 billion to update bridges, highways and roads.

"The single most important thing is to set our vision on the long term. Immediate action we have to do right now, in this moment, in this year but also doing it with a view of what we're going to be in the next 50 years," Buttigieg said.