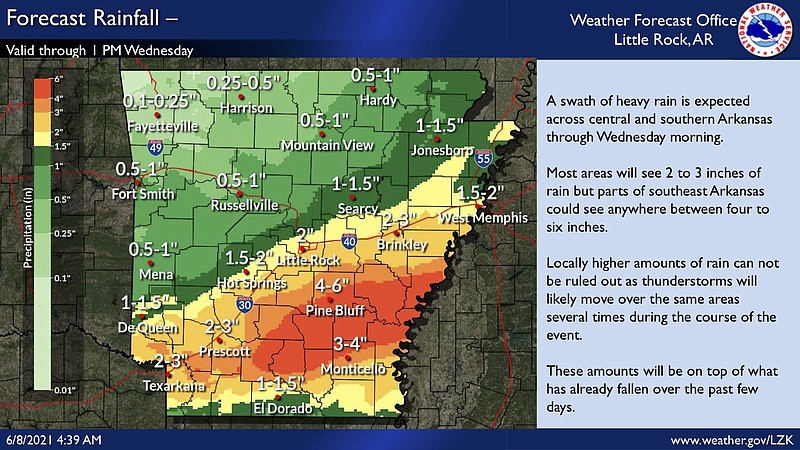 As much as 6 inches of rain is predicted to fall in parts of Arkansas through Wednesday, this National Weather Service graphic shows.

A line of storms is expected to saturate much of Arkansas with rainfall this week as forecasters express concerns about the potential for flash flooding.

Scattered showers and thunderstorms rolled across the state Monday, triggering a flash flood watch for most of Arkansas, with severe weather warnings being triggered in several counties, according to the National Weather Service in North Little Rock.

"We had a couple of reports of funnel clouds, but as far as we have heard there has been no damage reports as of yet," Smith said Monday night. "There was a report of a funnel cloud in Clark County around Gum Springs and we received a couple of calls about seeing funnel clouds east of Caddo Valley, but we have no confirmation of anything at this moment."

A line of severe thunderstorms knocked down trees and power lines in portions of Ouchita County and a downed tree caused a crash with a logging truck in Gurdon in Clark County, but those were the only reports of damage as of Monday night.

Smith said the weather agency's primary concern is the potential for flooding.

"Some portions of southern and Central Arkansas have received around 2 to 4 inches of rain today, but we have no reports of flash flooding so far," he said. "Our biggest concern is heavy rain that will continue this week. Some areas of the state have received a lot of rain over the past week or so."

Smith said this storm system is expected to linger until at least Thursday or Friday.

"By then the storm might shift into a more subtle pattern where we have isolated and scattered showers and storms more indicative of summertime patterns, but we got a few days of this left," he said.

According to the weather service, some parts of the state have already seen more than 4 inches of rain since Friday, resulting in a "primed and saturated soil surface" likely to see runoff if heavy rains continue.

"This system will have storms form and move over the same area over and over again," Smith said. "There is also a lot of moisture in the atmosphere as well. This system is just not moving very fast."

Smith said if the heavy rainfall continues throughout the week, then there is the potential to see the water rise in rivers and streams around the state.

"We have a few points in minor flood stage in the White River Basin right now," he said.

Smith said he suggests that Arkansas residents monitor conditions throughout the week and be ready to take action in the event of severe weather.