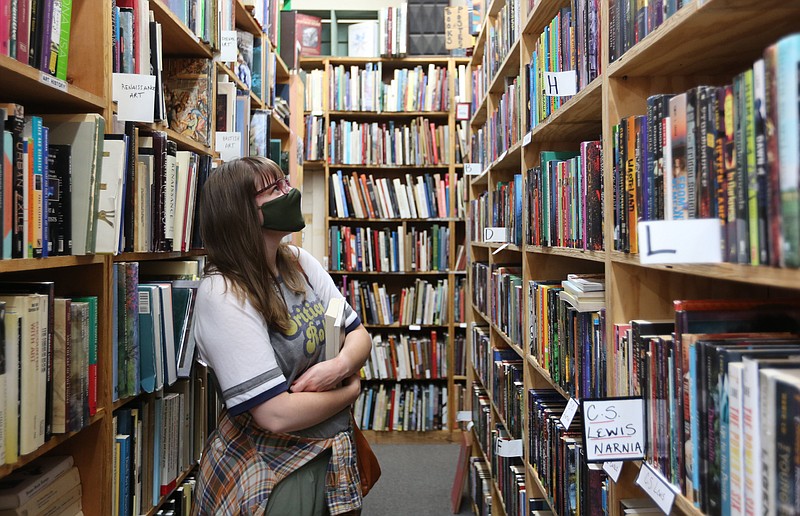 FILE -- Jessica Pollard looks at a variety of books Thursday, May 27, 2021, inside the Dickson Street Bookshop in Fayetteville. The store was closed for several months during the pandemic. Government sales tax revenue kept growing. (NWA Democrat-Gazette/David Gottschalk)

"This is the smallest ballot we've ever had for the city of Fayetteville," said Jennifer Price, executive director of the Election Commission.

Eight, in-person polling sites will be opened for the special election.

The tax is set to expire in June 2023. A successful election would continue the tax for another 10 years.

Should the extension fail, the city would have to make across-the-board cuts to make up for it, according to city officials.

The county has been discussing bonuses to employees from the fund, and Price said she thinks those who worked the general election last year deserve consideration.

"They'll look at all the departments, but a lot of times our poll workers, I feel like, are overlooked as an employee of the county, and I think that they should be considered in this as well," she said.

Price said a lot of poll workers are older, and they handled more than 98,000 voters in the middle of the covid-19 pandemic, an average of about 1,000 per day, including the early voting period. Also, voters were not required to wear masks, though most did, Price said.

"Anytime a poll worker had to deal with a voter, especially those supervisors, it was much closer contact than you would have even at the grocery store," Price said.

"If there's federal money through the CARES Act and employees within the county are being considered for bonuses, recognizing the work of poll workers who worked the biggest election in Washington County's history during a global pandemic, I mean it's certainly something that we should recognize," said Max Deitchler, election commissioner.