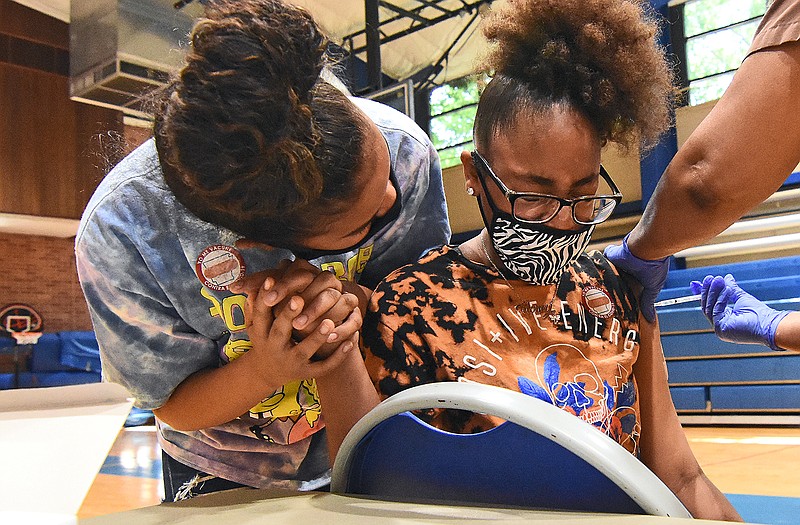 Payton Jones (left), 12, supports her sister, Jada Jones, 14, as she gets her first dose of the Pfzier coronavirus vaccine Saturday, May 15, 2021 during a vaccination clinic at Dunbar Community Center in Little Rock. (Arkansas Democrat-Gazette/Staci Vandagriff)

Gov. Asa Hutchinson on Tuesday urged parents to have their children vaccinated as soon as possible, noting that students who are fully vaccinated no longer have to quarantine after exposure to someone with covid-19.

"This is not something that should wait to next year," Hutchinson said.

"It needs to be done now for the students. They need to take advantage of that."

At his weekly news conference at the state Capitol, Hutchinson also said he's concerned about the number of unused vaccine doses in the state with approaching expiration dates.

He said he's spoken to White House officials about the tens of thousands set to expire this month.

If the doses can't be used within the state before they expire, he said, he'd like for them to go elsewhere.

"The first thing I would like to see, if there's doses, whether it's Arkansas or elsewhere, that are unused, that we get those to India or to Brazil or other places that need it," he said.

[Video not showing up above? Click here to watch » https://www.youtube.com/watch?v=60Gx-JaZiUM]

Another option is to send the doses to other states, he said, but "every state's in the same boat we're in, that they have some doses that are set to expire."

Some doses that were shipped directly to the state Department of Health can also be kept "quarantined" there for possible use later if federal officials decide to extend a vaccine's shelf life based on new information, he said.

As of Tuesday, Arkansas had 67,641 unused doses with expiration dates this month.

The bulk of those -- 54,526 -- were of the single-shot Johnson & Johnson vaccine, and the others were Pfizer doses.

Meanwhile, Arkansas' count of coronavirus cases rose Tuesday by 231 -- the fifth daily increase in a row that was larger than the one a week earlier.

The number of people hospitalized in the state with covid-19 rose by 29, to 204, its highest level since March 20 and an increase that Health Secretary Jose Romero attributed to gatherings over Memorial Day weekend.

The state's death toll from the virus, as tracked by the Health Department, rose by three, to 5,852.

Although Hutchinson described the quarantine rules as a "change in education policy," a guidance document issued by the state Department of Education's Division of Elementary and Secondary Education in late March noted the U.S. Centers for Disease Control and Prevention had advised that fully vaccinated people did not need to quarantine after exposure unless they developed symptoms.

Kimberly Mundell, a spokeswoman for the Elementary and Secondary Education Division, noted that at the time the guidance was issued, "very few, if any, students were fully vaccinated."

"Now that the vaccination ages are lowered, more students can get vaccinated, so in some regards what the governor said today is new to them," Mundell said.

People age 16 and older have been authorized to receive the Pfizer vaccine since December, but eligibility in Arkansas and other states was initially restricted to high-priority groups such as health care workers and nursing home residents.

Hutchinson extended eligibility on March 30 to all residents age 16 and older.

On May 11, he cleared Arkansas children age 12-15 to receive Pfizer shots after the U.S. Food and Drug Administration authorized the vaccine for that age group.

Health Department spokeswoman Danyelle McNeill said 16,186 Arkansas children age 12-15, or about 10% of the estimated 160,000 children in that age group, have had at least one vaccine dose.

That includes 3,699, or about 2.3% of the children in that age group, who are fully vaccinated.

The number with at least one dose represents 4.3% of the 82,507 children the U.S. Census Bureau estimated were in that age group in 2019.

The number fully vaccinated is 4% of the estimate.

"What this means for the students is it will minimize education loss," Hutchinson said of students who are fully vaccinated.

Vaccinating children will also "minimize disruptions to the workforce," since fewer parents will have to take time off work to stay with children who are quarantining, and it will reduce the impact of the virus on sports and other extracurricular activities, he said.

Hutchinson also displayed a chart indicating that, after falling in March, the number of hospitalizations among Arkansans age 25-48 rose in April and May.

In May, 154 Arkansans in that age group were hospitalized, making up 31% of the state's hospitalizations.

By contrast, in February, the 184 Arkansans in that age group who were hospitalized made up just 18% of the state's hospitalizations.

"You see an increase in that age group, and that's the gap in our vaccinations," Hutchinson said.

Among Arkansans age 65 and older, the number of hospitalizations has fallen each month since February, going from 494 that month to 164 in May.

Romero pointed to a CDC study, published last week, that examined the covid-19 hospitalizations of 204 children age 12-17 in other states from January through March.

He said the study highlights the need to vaccinate children before the next school year starts in the fall.

"Infection by covid in this age group is not benign," Romero said.

The number of unused vaccine doses as of Tuesday that had expiration dates this month was down from 73,200 as of May 27.

At that time, 1,167 of Arkansas' Johnson & Johnson doses were set to expire today.

As of Tuesday, that number had been reduced to 767 as more doses were administered.

Most of the Johnson & Johnson doses with expiration dates this month are set to expire June 23.

Compared with the Pfizer and Moderna vaccines, the pace of Johnson & Johnson vaccinations has been slower.

It also has a shorter shelf life.

State Epidemiologist Jennifer Dillaha has said it can be kept in the refrigerator for about four months.

Administration of the Johnson & Johnson vaccine was halted nationwide for about two weeks in April after reports that six women developed rare blood clots after receiving the shots.

Federal health officials cleared the vaccinations to resume on April 23 after experts reviewed the cases of a total of 15 women who developed the clotting disorder and found that the benefits of the shots outweighed the risks.

The Wall Street Journal reported Tuesday that Pennsylvania, West Virginia and Oklahoma are among other states with thousands of Johnson & Johnson doses set to expire this month.

Ohio Gov. Mike DeWine said Monday that his state has about 200,000 Johnson & Johnson doses that will expire June 23, and he urged providers to administer them as quickly as possible.

At a briefing with reporters on Tuesday, White House coronavirus adviser Andy Slavitt said the FDA is exploring "processes that will allow the doses to potentially last longer" and that officials are also "continuing to look at opportunity for continued delivery of those doses."

"There is a very, very small fraction of doses that have been sent out to states that will ultimately not be used," Slavitt said.

"This will be -- these will be fractional amounts and really will not have any significant bearing on our ability to commit to distribute vaccines globally."

The White House has said it will distribute 80 million vaccine doses to other countries by the end of June.

Those will come from "the federal pool of supply," not from the states, White House coronavirus coordinator Jeff Zients told reporters last week.

Romero said Tuesday that vaccine can be kept in "quarantine" at the Health Department's headquarters in Little Rock after its expiration date for possible use later if federal officials issue new guidance about the vaccine's shelf life.

That isn't an option, however, once the vaccine has been sent to a provider or even one of the department's local health units, he said.

The Health Department had not quarantined any doses as of Tuesday, he said.

McNeill said the department has 16,563 vaccine doses at its headquarters, and none of them expire in June.

According to the CDC, the number of Arkansans who had received at least one vaccine dose rose Tuesday by 2,513, to 1,212,579, representing about 40.2% of the state's population.

Nationally, 51.7% of people had received at least one vaccine dose, and 42.3% were fully vaccinated.

The cases that were added to the state's tallies included 111 that were confirmed through polymerase chain reaction, or PCR, tests.

The number of cases that were considered active rose by 62, to 1,656, as new cases outpaced recoveries.

The number of the state's virus patients who have ever been on a ventilator rose by six, to 1,682.