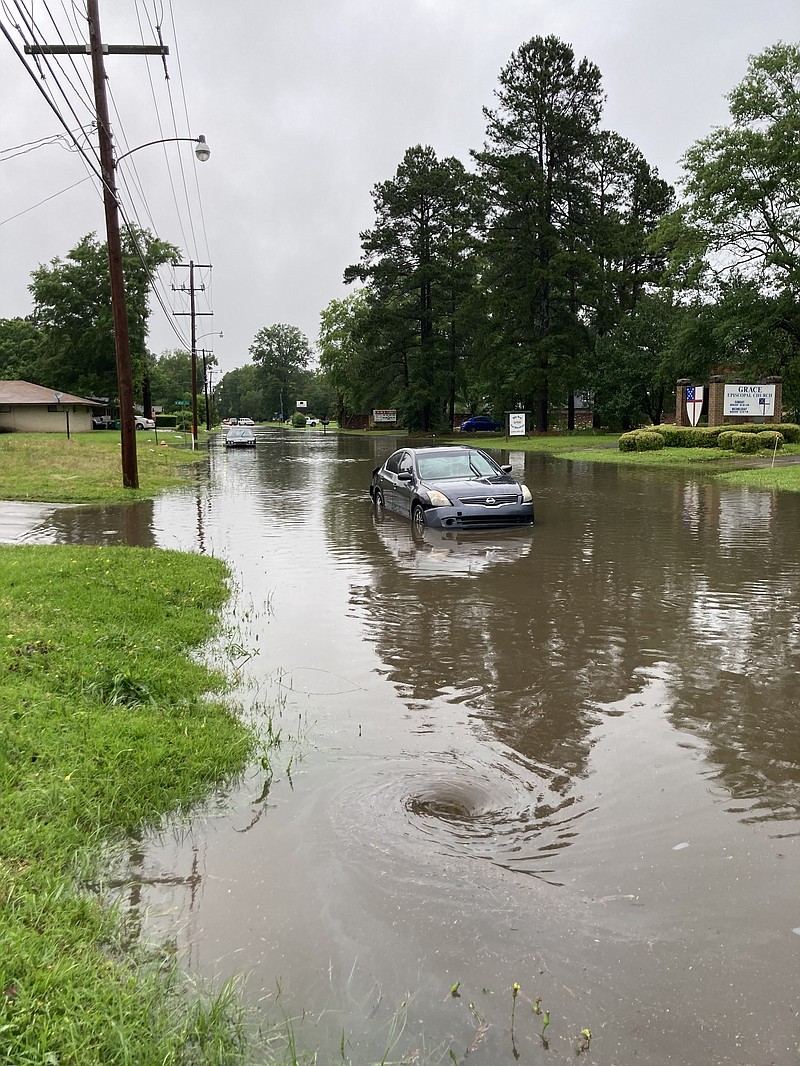 A few drivers who tried to make it down Hazel Street on Tuesday were unsuccessful as the high water was too much for their cars. The flooded street was slowing draining, as evidenced by the eddy that can be seen in the foreground. (Pine Bluff Commercial/Byron Tate)

A slow-moving storm system that took advantage of significant moisture in the atmosphere dropped a record amount of rain on Pine Bluff on Tuesday, according to the National Weather Service.

By late afternoon, Pine Bluff had received 2.43 inches, which set a record for June 8. The previous record for the date occurred last year when Pine Bluff received 2.36 inches of rain, according to Brian Smith, a meteorologist with the weather service.

"There was just a whole lot of moisture, and the system kept piling up the rainfall really quickly," he said.

The area has received so much rain that "additional rain is not going to help," he said. "That city can't handle any additional water."

Much of southeast Arkansas has suffered the same fate as Pine Bluff or worse. Smith said that over the past three days, other parts of Jefferson County, as well as Arkansas, Desha and Lincoln counties, received anywhere from 4 inches to more than a foot of rainfall. Rohwer, a community in Desha County, received 9.25 inches in 24 hours, Smith said.

The rainfall in Pine Bluff has caused some flooding. On Tuesday afternoon, a few cars attempting to travel down Hazel Street, north of 42nd Avenue, stalled out and sat empty as drivers waited for the water to recede and a tow truck. At one point during the day, the skies became so dark that streets lights came on.

There were apparently no injuries associated with the heavy rainfall. Fire Chief Shauwn Howell said that, because the rain had been coming intermittently, water in many areas was able to drain away before creating issues.

"Problems happen," he said, "when storms park on top of the city and stay there. That has not been the case today."

Howell said a few streets were closed because of the pockets of flooding and that a few other streets had been closed earlier in the day because of fallen limbs. He said he had talked to the street department and that the limbs had been picked up and those areas reopened.

Smith said that once the storm system moves out of the area, temperatures will quickly rise. The forecast is for the high to be in the 90s by Friday. Smith said the forecast models may be a little high that day but that what was very likely to happen is that heat indexes will reach uncomfortable levels.