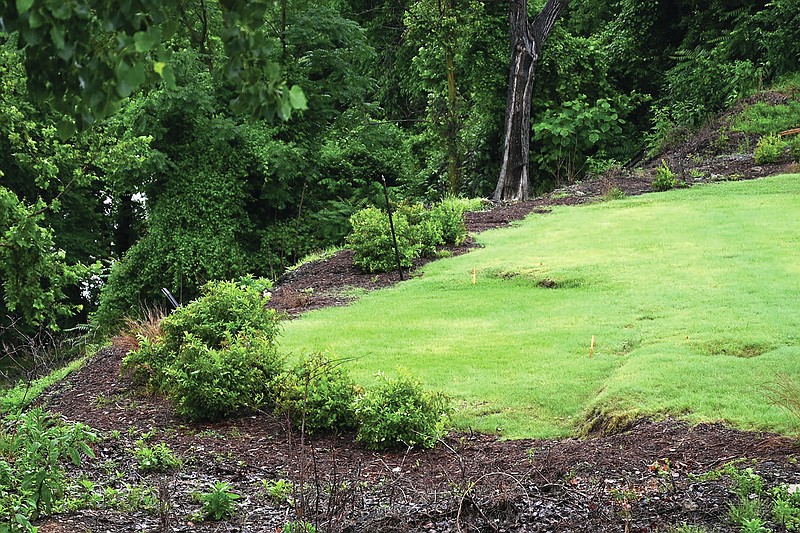 Grass slumps in a possible landslide outside the Department of Arkansas Heritage on Monday, June 7. (Arkansas Democrat-Gazette/Stephen Swofford)

A slow-moving landslide has been discovered near the state Division of Heritage headquarters, Parks, Heritage and Tourism Secretary Stacy Hurst told employees Monday.

Hurst said the "slump" north of the parking lot was first discovered by Theo Witsell, the chief of research and inventory for the Arkansas Natural Heritage Commission, on May 19, according to the email obtained by the Arkansas Democrat-Gazette on Tuesday.

The department building, at North Street and LaHarpe Boulevard, sits atop a steep slope that leads down to the Arkansas River.

Hurst said the department has engaged experts including the Arkansas Geological Survey, the building architect and a geotechnical engineering firm, and professionals will be on site to conduct tests this week.

She said the department will "contract immediately with the geotechnical engineering firm to fully assess the situation and recommend a plan for mitigation."

"The slide does present a danger to the lawn area and, potentially, the parking lot," Hurst said in the email.

Mike Hood, manager of Little Rock's civil engineering division, went to the department headquarters Monday to look at the ground near the parking lot and said the sinking area had settled down about a foot. He told the Democrat-Gazette on Tuesday that the situation "has not shown itself to be immediately catastrophic," and that he and others were monitoring it.

The slope is near part of the Arkansas River Trail. That section isn't connected to the main part of the trail, so there's not much traffic, Hood said, though there are some walkers who use it.

The department blocked off the most northern row of parking spaces as a precautionary measure and to remove some weight, Hurst said.

The Division of Heritage -- when it was the Department of Arkansas Heritage, before state government was reorganized in 2019 -- announced plans to build its headquarters at North Street in 2014. The building was completed in 2016 and also houses the Arkansas Arts Council, the Arkansas Historic Preservation Program and the Arkansas Natural Heritage Commission.

In her email, Hurst said a geotechnical investigation was done in 2014 before the building and parking lot were constructed.

"Measures were taken in the planning and design to ensure safe construction. For example, the building itself is on drilled piers that go down to bedrock," she wrote.

When the new building and parking lot were being constructed, the demolition of a warehouse uncovered remnants of the foundation of an 1890s trolley barn beneath the parking lot, according to an opinion column Hurst wrote for the Democrat-Gazette in 2017. Hurst said the department fully documented the streetcar site.

Hood said the slide at the department headquarters is similar to one that occurred about a decade ago between City Hall and the Union Pacific Railroad tracks after heavy rain and flooding on the Arkansas River.

"We have been aware that there's problems with the river since 2011," he said.

A study that the city commissioned a few years ago found "that there's a lot of loose, unstable soil in that area," Hood said.

Part of that area is in an easement that the city purchased, but the upper section is state property, Hood said.

The city has been planning to execute a project to refill the slope with better material and obtained a $2 million grant from the Federal Lands Access Program to do so, but it has yet to obtain a permit allowing it to proceed from the U.S. Army Corps of Engineers.