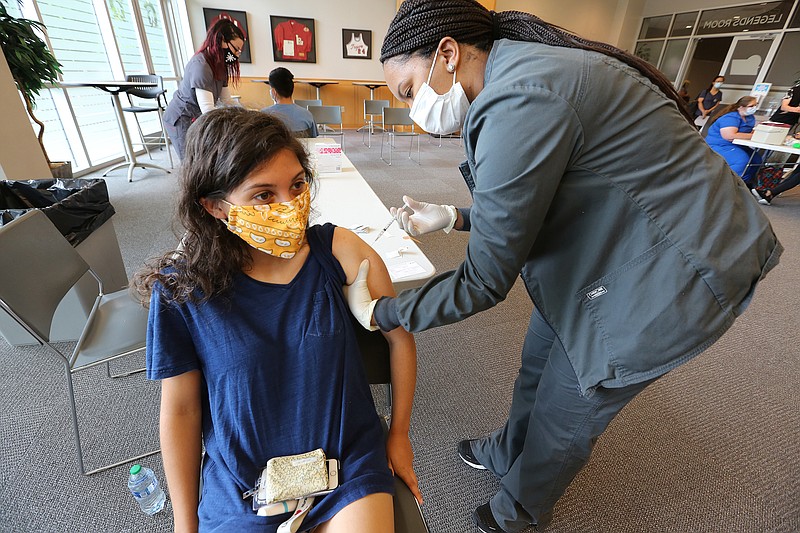 University of Arkansas at Little Rock senior Rebecca Farhat of Fort Smith gets her first dose of the Pfizer vaccine from Simone Kennedy, a junior nursing student at UALR, during UALR's vaccine clinic put on by Don's Pharmacy on Wednesday, April 28, 2021, at the Jack Stephens Center in Little Rock. (Arkansas Democrat-Gazette/Thomas Metthe)

The number of people hospitalized in Arkansas with covid-19 rose Wednesday by double-digits for the second day in a row, while the state's count of cases rose by 201.

The state's death toll from the virus, as tracked by the Department of Health, rose by two, to 5,854.

"While active cases are declining, this rise in hospitalizations is a reminder of caution and a reason to get vaccinated against COVID-19."

In fact, however, the number of cases in the state that were considered active rose Wednesday by three, to 1,659, as new cases outpaced recoveries.

That total was also up by one from its level the previous Wednesday.

Clay Smith, a social media specialist for Hutchinson, said the tweet referred to a decline in active cases that had been confirmed through polymerase chain reaction, or PCR tests.

That number fell by 14 on Wednesday, while the number of active "probable" cases, which include those identified through less-sensitive antigen tests, rose by 17.

Already at its highest level since March 20, the number of people hospitalized with covid-19 in the state rose Wednesday by 12, to 216.

A day earlier, the number rose by 29 -- the largest single-day jump since early February.

The number of the state's virus patients who were on ventilators rose Wednesday by three, to 40, its highest level since May 12.

The number of covid-19 patients in intensive care units in the state rose by six, to 93.

The increase in the state's case count was smaller by 30 than the one a day earlier and by 41 than the one the previous Wednesday.

After rising the previous five days, the average number of cases added to the state's tallies over a rolling seven-day period fell to 176.

Meanwhile, the number of vaccine doses providers reported having administered, including second doses of the Pfizer and Moderna vaccines, rose Wednesday by 6,968, according the Health Department.

That was bigger by 1,151 than the increase the previous Wednesday.

The average number of doses administered each day over a rolling seven-day period rose to 5,734.

That was up from a recent low of 4,655 doses on average that were administered during the seven-day span ending Saturday but well below the state's peak of more than 23,000 doses a day in early April.