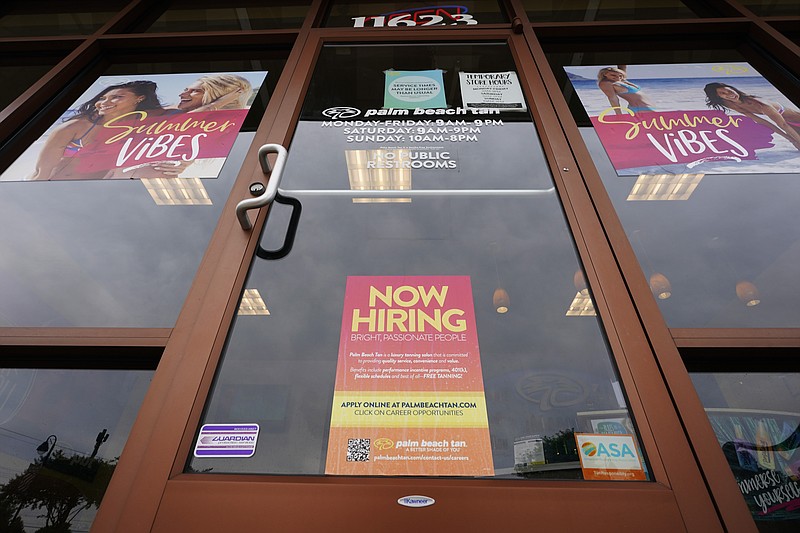 A Now Hiring sign at a business in Richmond, Va., Wednesday, June 2, 2021. U.S. employers posted a record 9.3 million job openings in April as the U.S. economy reopens at break-neck speed. Openings were up 12% from 8.3 million in March. (AP Photo/Steve Helber)

The number of job openings soared 12% from the 8.3 million counted in March.

But employers hired just 6.1 million people, up 1% from March, according to a Labor Department report Tuesday, suggesting that positions are opening faster than companies can fill them.

"More than a year after horrific job losses and wage cuts, job seekers have a strong hand in the labor market again. Demand for workers is surging as the broader economy starts to emerge from the pandemic," said Nick Bunker, director of the Hiring Lab. "At the same time, supply is restrained as workers are slow to find their post-pandemic normal. The result is a labor market that has snapped back quicker than many expected."

Hotels and restaurants, reopening after being forced to close or curb hours at the start of the coronavirus pandemic, reported the biggest increases in job openings.

The number of Americans quitting their jobs rose 11% to almost 4 million in April, the highest figure in records going back to 2000.

The Labor Department reported Friday that the U.S. economy generated 559,000 new jobs in May and that the unemployment rate dipped to 5.8% from 6.1% in April. The hiring figures would ordinarily be viewed as exceptional. But as the economy rebounds from the recession, some economists had expected to see much faster job gains. The United States is still 7.6 million jobs short of where it stood in February 2020.