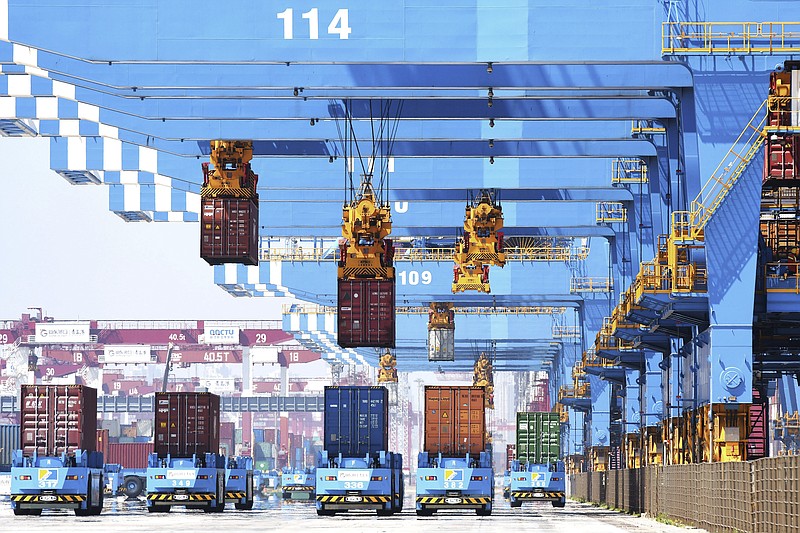 Gantry cranes move containers onto transporters at a port in Qingdao in eastern China's Shandong province Friday, June 4, 2021. China's exports surged nearly 28% in May while imports jumped 51% as demand rebounded in the U.S. and other markets where the pandemic is waning, though growth is leveling off after a stunning recovery from last year's slump. (Chinatopix via AP)

The U.S. trade deficit narrowed in April for the first time this year as the value of goods and services exports climbed and as imports fell.

The April deficit, the gap between what America buys from abroad and what it sells to other countries, was $68.9 billion, down 8% from a record March deficit of $75 billion, the Commerce Department reported Tuesday.

In April, exports of U.S. goods and services rose 1.1%, to $205 billion, while imports fell 1.4%, to $273.9 billion. Part of the increase in exports came from a $1.4 billion rise in sales of civilian aircraft, a sign that a rebound in air travel from depressed pandemic levels is prompting stronger sales of jetliners.

The drop in imports reflected a $1.1 billion decline in purchases of foreign-made automobiles and auto parts.

Through the first four months of the year, the U.S. trade deficit totaled $281.7 billion, up 50.4% from the deficit during the same period in 2020, a time when the U.S. economy was essentially shut down because of the coronavirus pandemic.

The politically sensitive deficit with China was $25.8 billion in April, down 6.7% from the March imbalance. But through the first four months of this year, the deficit with China, the largest the United States runs with any country, was up 37.1% over the same period a year ago.

The U.S.' overall deficit in goods for April totaled $86.7 billion while the surplus in services totaled $17.8 billion. The United States runs surpluses in services trade, which helps lower the goods deficit. However, the services economy, which includes travel payments such as airline fares, has been hit hard by the pandemic, with the services surplus down 16.2% this year compared with the same period a year ago.

U.S. goods exports were driven by a $1.4 billion increase in shipments of aircraft and a $981 million advance in crude oil.

The value of automotive exports retreated almost 8%, to $11.9 billion. Vehicle imports also declined, dropping by $1 billion, to $29.4 billion, as global manufacturers contended with shortages of chips.

While many economists are forecasting that the trade deficit will continue to drop in the coming months, some analysts are worried that the recovering U.S. economy will continue to favor foreign-made products.

"Domestic demand is roaring back amid reopening and a rapidly improving health backdrop," said Mahir Rasheed, U.S. economist at Oxford Economics. "The trade deficit is poised to widen further as the fiscally powered, consumer-driven recovery in the U.S. runs ahead of the global economic rebound."

But Michael Pearce, senior U.S. economist, said he believed that trade would provide a slight boost to overall economic growth in the current April-June quarter, helped by an improving performance of U.S. exports. That would be an improvement from the big drag to economic growth from trade in the first quarter.

During his four years in office, former President Donald Trump pursued a tough trade strategy that used punitive tariffs on other countries' exports in an effort to lower America's huge trade deficits with the rest of the world, which he blamed for the loss of millions of American manufacturing jobs.

But Trump's efforts failed to alter the trade imbalances. So far, the Biden administration has left most of the tariffs in place as his administration works to determine the approach it will take on trade.

Information for this article was contributed by Martin Crutsinger of The Associated Press and by Eric Martin of Bloomberg News (WPNS). 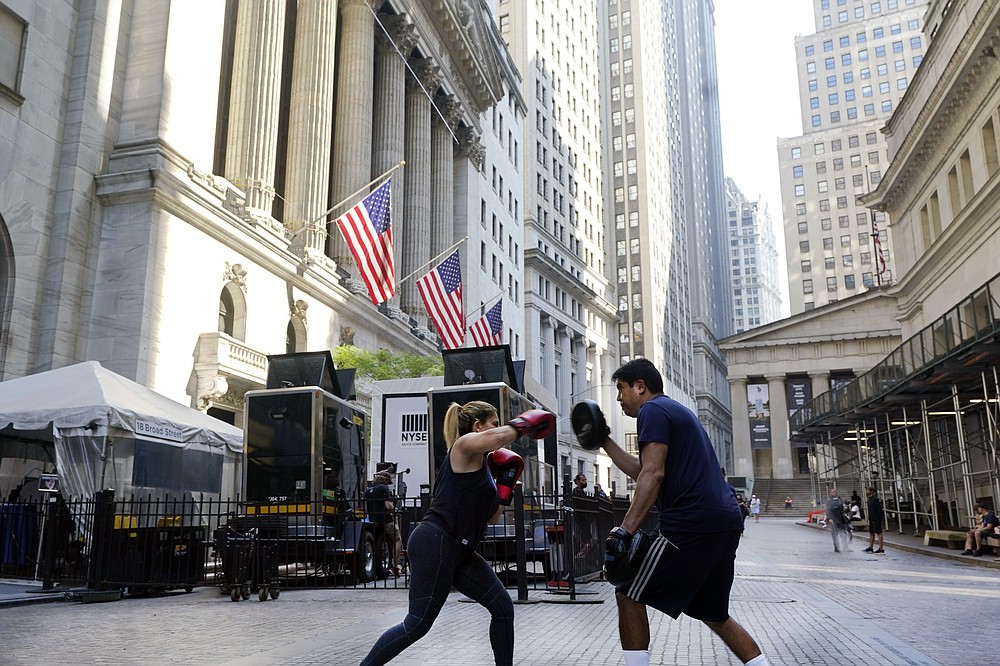 A woman and her trainer workout outside the New York Stock Exchange, Monday, June 7, 2021. Stocks are nudging mostly higher in early trading, putting the S&P 500 and the Dow Jones Industrial Average back near the record highs they reached a month ago. (AP Photo/Richard Drew)
ADVERTISEMENT