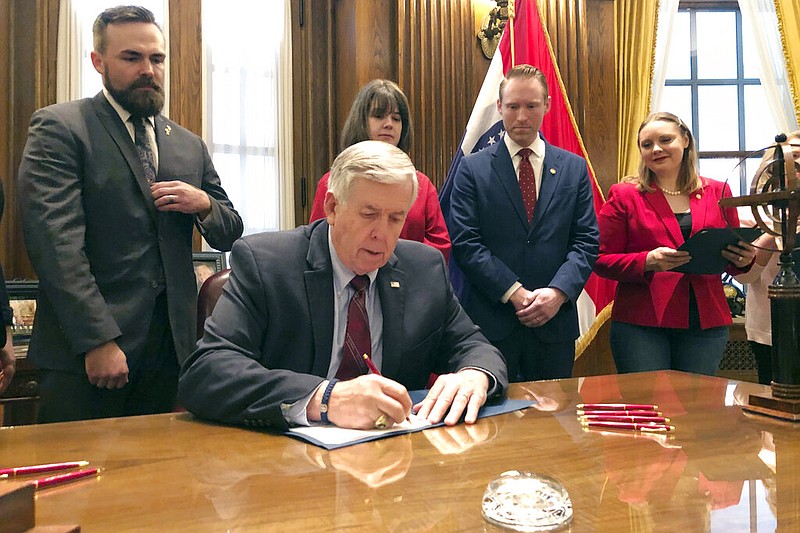 Missouri Gov. Mike Parson signs one of the nation's most restrictive abortion bills, banning the procedure on or beyond eight weeks of pregnancy, in Jefferson City, Mo., in this May 24, 2019, file photo. (AP/Summer Balentine)

A ruling handed down Wednesday by the 8th U.S. Circuit Court of Appeals in a Missouri abortion dispute is being taken as a hopeful sign for plaintiffs challenging similar abortion laws in Arkansas.

A three-judge panel heard arguments in September in the legal battle over a 2019 Missouri law that would prohibit abortion after eight weeks of pregnancy and would prevent a woman from obtaining an abortion because the fetus has Down syndrome.

The three judges who made up the panel were Jane Kelly of Cedar Rapids, Iowa, Roger Wollman of Sioux Falls, S.D., and David Stras of Minneapolis.

The panel ruled that prohibiting abortion at any stage before the stage of viability -- regardless of reason -- amounts to an unconstitutional prohibition of abortion, a position the U.S. Supreme Court has consistently taken since the 1973 Roe v. Wade decision that overturned abortion prohibitions in all 50 states.

Abortion foes are hopeful, however, that with the addition of three justices to the court by former U.S. President Donald Trump, which gave the court a presumed 6-3 conservative majority, that the pendulum may begin to swing the other way.

Since 1973, 24 weeks has been the accepted standard of gestational age viability for a fetus to live outside the womb in the majority of court rulings on the matter.

Missouri argued that the gestational age provisions of the law were not a ban on pre-viability abortions but were merely attempts to regulate those abortions.

"This distinction is significant," the ruling read. "Bans on pre-viability abortions are categorically unconstitutional."

The court noted that it had already rejected a similar argument in its ruling over Arkansas' so-called "heartbeat bill" that would have prohibited doctors from performing abortions when the fetus's heartbeat could be detected, which sometimes occurs as early as 12 weeks.

Anthony Rothert, legal director for the ACLU of Missouri -- in an emailed statement -- accused politicians in Missouri of waging a "dishonest crusade against reproductive health care."

"Missourians are fair and reasonable folks who understand that we are not a free people if the government can ban abortion," Rothert said in the statement. "We share their relief that politicians' attempt to disguise a ban by pretending it is a minor regulation did not fool the Court of Appeals."

Rothert went on to say that despite celebrations over the ruling Wednesday, "we are prepared to defend Missourians from the next government intrusion into private lives tomorrow."

ACLU of Arkansas Executive Director Holly Dickson said the 8th Circuit decision has a potential impact on Arkansas in at least two ways:

"We have similar laws under challenge in the trial courts with our latest challenge so I would strongly suspect when we file our motion for a preliminary injunction you'll see this case cited and briefed," Dickson said. "The [Down syndrome] ban that is at issue in the Missouri case is also very similar to what [Attorney General Leslie Rutledge] has tried to get the U.S. Supreme Court to take up out of Arkansas."

On May 26, the ACLU of Arkansas filed a lawsuit in U.S. District Court in Little Rock challenging the Arkansas Unborn Child Protection Act, sponsored by Sen. Jason Rapert, R-Conway, which is believed to be the most restrictive abortion law in the nation because it would ban abortion in all cases except to save the life of the mother.

In Wednesday's ruling, Stras issued a dissent on the Down syndrome provision of the law, saying the plaintiffs had failed to show how the law would cause irreparable harm to women if enacted.

Rutledge, who has petitioned the U.S. Supreme Court to hear a similar Arkansas case and has been a staunch supporter of legislation that would restrict access to abortion in Arkansas and throughout the country, said Wednesday that her stance has not changed.

"I will always fight to defend innocent lives and protect the unborn," Rutledge said in a statement emailed to the Arkansas Democrat-Gazette. "Through my personal friendships, I know that while individuals with Down syndrome may have an extra chromosome, they also have extra love and joy they share unconditionally. The Missouri opinion underscores why my office sought U.S. Supreme Court review in Arkansas's similar case and why the Court should grant our cert petition."