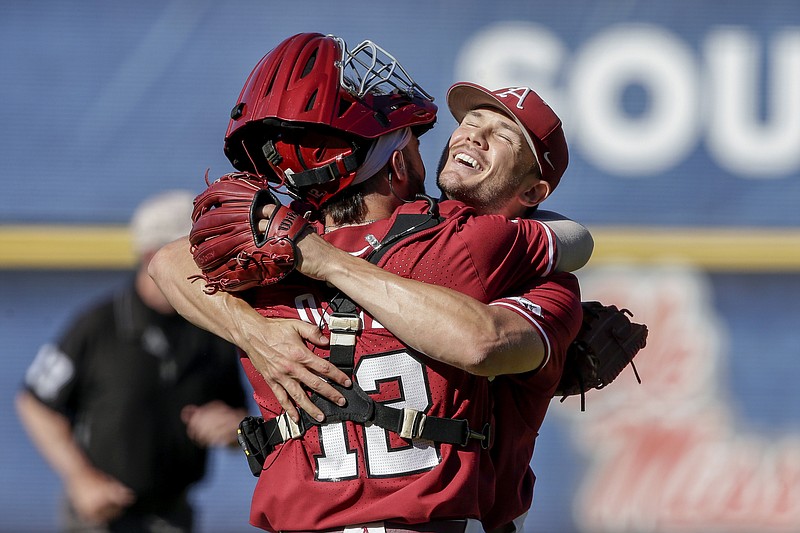 Right-handed pitcher Christian Foutch, a 2022 pledge, attended his school’s baseball banquet Monday and missed the 6-2 victory over Nebraska to advance to the Super Regional.

“I saw the highlights, and other teams are always trying to get to the Arkansas bullpen early, which Nebraska did,” Foutch said. “The fact that the titled closer Kopps can throw 81 pitches and only allow one run is something out of a video game.”

He praised catcher Casey Opitz’s home run to get the Razorbacks on the board along with center fielder Christian Franklin’s patient eye and Charlie Welch’s timely three-run home run.

“You have Opitz, who has only hit one home run all year, and then he takes one out to break the shutout,” Foutch said. “Then Franklin gets a two-out walk to start the eighth and it all broke loose. Welch’s bomb was obviously the dagger, but Kopps just shows you what a pitcher of the year does in an elimination game.

"He is incredible and the Hogs showed that they are at some point going to break the game open and score.”

Outfielder Cameron Carter, a 2024 commitment, said Monday’s game is a big reason why he wanted to be a Razorback.

“It was every reason I committed to Arkansas,” said Cater, who attended two games of the Alabama series earlier in the season. “The fans are amazing, the coaching decisions were unbelievable, and I’m glad I never have to face Kopps.”

Carter, 6-0, 155 pounds, of Olathe (Kan.) West, picked the Razorbacks over over Tennessee, Arizona State and other programs.