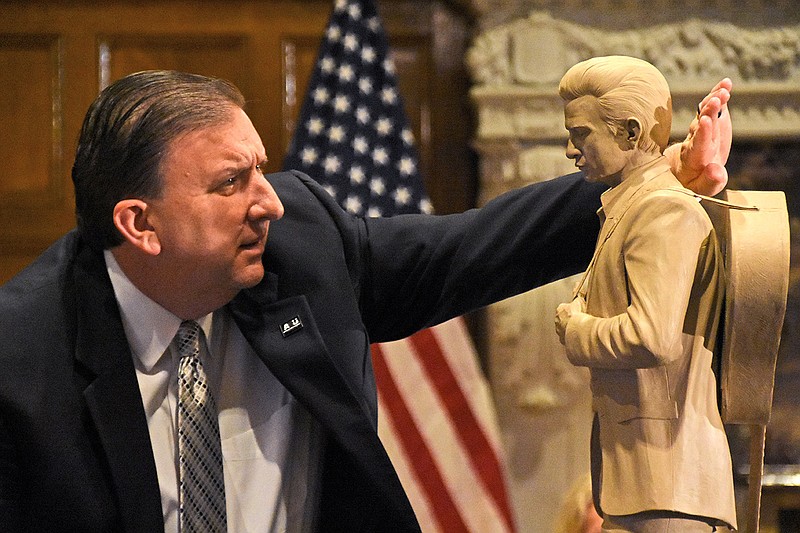 Shane Broadway, chairman of the National Statuary Hall steering committee, blocks the light to get a better look at one of the clay sculptures of musician Johnny Cash during the Capitol Arts and Grounds Commission session Wednesday at the state Capitol. More photos at arkansasonline.com/610sculptures/. (Arkansas Democrat-Gazette/Staci Vandagriff)

Five artists on Wednesday presented their visions for likenesses of two Arkansas icons that, if selected, they will sculpt for display in the U.S. Capitol.

The Capitol Arts and Grounds Commission and the National Statuary Hall steering committee reviewed each artist's roughly 3-foot-tall clay model and heard from the sculptors about their processes and artistic decisions.

Arkansas is in the process of replacing the two statues representing the state in the U.S. Capitol with likenesses of civil-rights leader Daisy Gatson Bates and country music legend Johnny Cash, as ordered by the Legislature with Act 1068 of 2019. Congress invited each state to submit up to two bronze or marble statues to be placed in Statuary Hall in 1864, and as the number of statues grew, they spread to other areas in the U.S. Capitol.

In February, the panelists narrowed the 31 applicants down to three finalists for each statue, with one artist in the running for both projects. Members of the committees will now rank their first, second and third choices and turn in their scores by Friday, and the results will be discussed in a meeting Monday.

Republican Secretary of State John Thurston said Wednesday that he was confident the committees had selected the best three options for each statue.

"It's taken a long time to get to this point in the process," he said.

Panel members said making the final rankings would be a tough decision, because of the quality of all six submissions.

"I tend to think it's one of those situations where you can't go wrong," Shane Broadway, chairman of the National Statuary Hall steering committee, said at the end of Wednesday's review.

Victor was also among the three finalists for designing and casting the sculpture of Bates. The other two finalists are Jane DeDecker of Loveland, Colo., and J. Brett Grill of Grand Rapids, Mich.

Once the top scoring artist for each statue is selected, the secretary of state's office will negotiate their contracts. Act 1068 included an unfunded appropriation of $750,000 and tasked the Arkansas secretary of state with receiving funds for the effort.

Republican Gov. Asa Hutchinson set a $1 million fundraising goal for the effort in November, and officials said in May that funds to pay for the statues have surpassed $780,000. Those funds include private donations as well as a $250,000 grant from the Arkansas Natural and Cultural Resources Council. 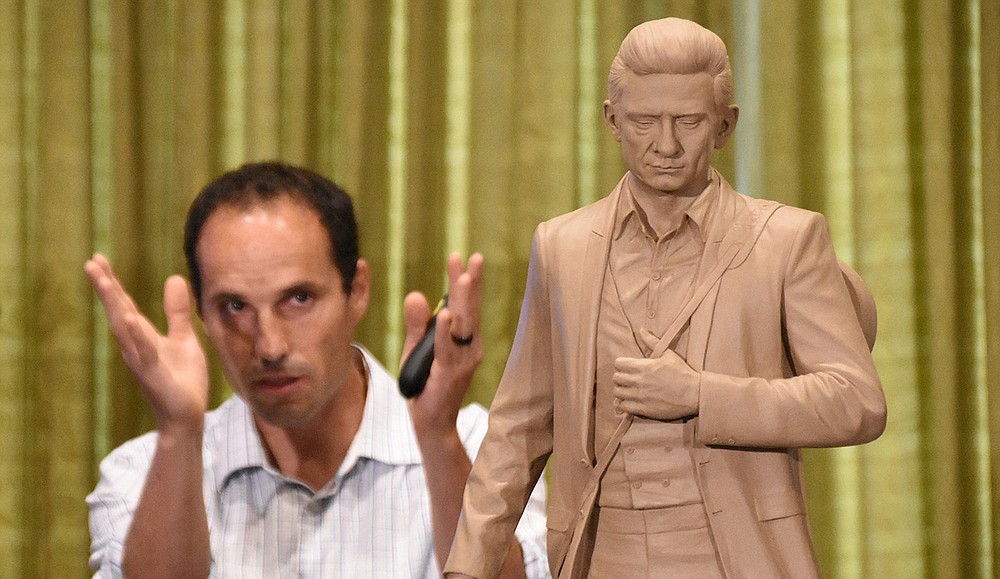 Sculptor Benjamin Victor of Boise, Idaho, talks about his clay sculpture of musician Johnny Cash during his presentation to the Capitol Arts and Grounds Commission on Wednesday at the state Capitol. Victor was one of three finalists chosen for the creation of a statue of Cash that will be on display at the U.S. Capitol to represent Arkansas. Victor was also a finalist for the sculpture of Little Rock Nine mentor Daisy Gatson Bates. (Arkansas Democrat-Gazette/Staci Vandagriff)
ADVERTISEMENT