Security is at issue for TikTok, others by Compiled Democrat-Gazette Staff From Wire Reports | June 10, 2021 at 1:54 a.m. 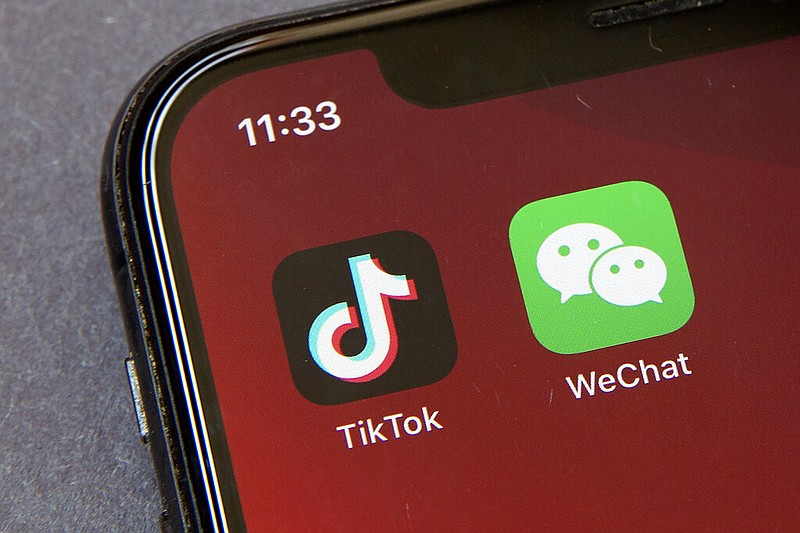 Icons for the smartphone apps TikTok and WeChat are seen on a smartphone screen in Beijing in a Friday, Aug. 7, 2020, file photo. (AP/Mark Schiefelbein, File)

President Joe Biden on Wednesday revoked a Donald Trump-era executive order that sought to ban the popular apps TikTok and WeChat, and he replaced it with one that calls for a broader review of a number of foreign-controlled applications that potentially pose a security risk to Americans and their data.

The Trump-era order had not been carried out "in the soundest fashion," administration officials said in a call with reporters Wednesday, adding that the new directive would establish "clear, intelligible criteria" to evaluate national security risks posed by software applications connected to foreign governments, particularly China.

Biden's directive is yet another designed to reassess executive orders made by his predecessor to curb the growing influence of the Chinese military and Beijing's technology sector. It is also the first significant step Biden has taken to address the saga between TikTok and the Trump administration, which tried to ban the app over concerns it posed to national security but was immediately challenged in federal court.

Analysts said the new executive order is meant to create a process that could withstand such a challenge.

The Biden administration has worked to reassess several directives Trump made to curb China's influence, and in several cases it has taken a more aggressive approach. Last week, Biden expanded a Trump order by barring Americans from investing in Chinese firms linked to the country's military or engaged in selling surveillance technology.

It is unclear how effective either order will ultimately be at stopping the spread of Chinese espionage technology, and the latest directive does not fully resolve the future of TikTok, a wildly popular app with 100 million American users.

In September, the Trump administration followed through with an executive order banning operations of TikTok and WeChat, the popular messaging service owned by Tencent. A judge granted an injunction of the Trump order, giving TikTok a lifeline.

At the same time, the Trump administration took on the role of deal-maker. It said TikTok could maintain U.S. operations only if it sold itself to a U.S. company and shed all Chinese-based infrastructure and ties. After rushed bids and jockeying by tech giants, Oracle and Walmart won their bid to buy a stake in the company for an undisclosed amount. Trump then rejected the deal that his administration had orchestrated.

The Trump administration's attempted bans also "ran up against this critique that they were mimicking China's Great Firewall," said Samm Sacks, a fellow at Yale Law School's Paul Tsai China Center. "What the Biden administration wants to do is maintain an open, secure internet that doesn't take a page from Beijing's playbook, while addressing legitimate risk."

James Lewis, a senior vice president of the Center for Strategic and International Studies, said the Biden administration has shown no easing of the government's strong stance against China. But the new executive order lays out much more precise criteria for weighing risks posed by TikTok and other companies owned by foreign adversaries such as China.

"They are taking the same direction as the Trump administration but in some ways tougher, in a more orderly fashion and implemented in a good way," Lewis said. He added that Biden's order was stronger than the Trump directive because "it's coherent, not random."

On Wednesday, administration officials would not go into specifics about the future of TikTok's availability to American users or say whether the U.S. government would seek to compel ByteDance, TikTok's parent company, to transfer American user data to a company based in the United States. Amid a number of successful legal challenges waged by ByteDance, a deal to transfer the data to Oracle fell through this year shortly after Biden took office.

Administration officials said a review of TikTok by the Committee on Foreign Investment in the United States, the body that considers the national security implications of foreign investments in U.S. companies, is continuing and is separate from the order.

Several apps, including TikTok and WeChat, did not immediately respond to requests for comment.

The order issued Wednesday was meant to broaden one issued in 2019 by the Trump administration, which banned U.S. telecommunications companies from installing foreign-made equipment that could pose a threat to national security. That order did not name specific companies, nor did the one Biden issued Wednesday.

The new directive also does not mention specific retaliatory measures that could be taken if an application is found to be a threat to national security.

Information for this article was contributed by Katie Rogers and Cecilia Kang of The New York Times and by Matt O'Brien, Eric Tucker and Tali Arbel of The Associated Press.