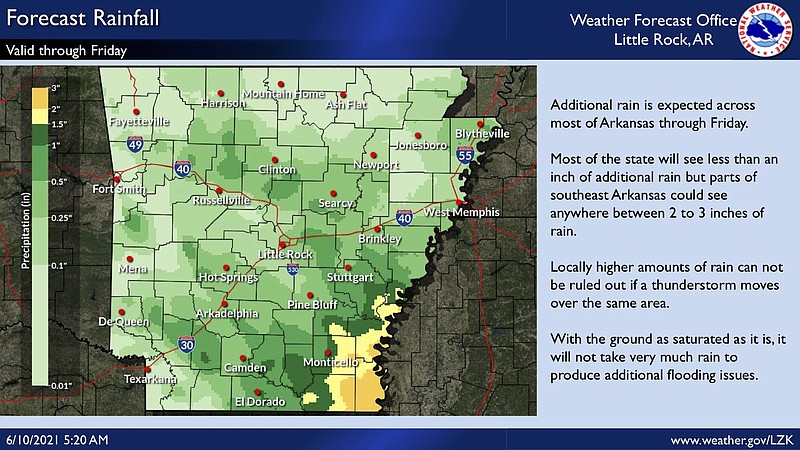 Gov. Asa Hutchinson on Thursday declared a state of emergency in response to flooding in southeast Arkansas.

The declaration will direct $100,000 from the Emergency Response Fund of the Governor’s Disaster Fund to be used “at the discretion of the director of the Division of Emergency Management,” according to a news release from the governor’s office.

The governor will visit Dumas on Friday morning to assess the damage, the release states.

At least one tornado was sighted in Lonoke County on Wednesday, the National Weather Service said.

The tornado was reported in the southern part of the county, between England and Tucker, according to the agency.

Forecasters have video evidence of the tornado, meteorologist Dylan Cooper said. A survey team on Thursday will go to at least two areas where potential tornado sightings and damage were reported, according to Cooper.

Many areas in Arkansas have seen in excess of a foot of water due to heavy rain this week, a Thursday morning briefing from the weather service states.

Up to 3 inches of additional rainfall is possible in central and southeastern parts of the state through Friday morning, where flash flood watches remain in effect, according to the briefing.

Forecasters said there is a marginal chance of severe weather for much of the state Thursday afternoon, and into the early evening hours. Gusty winds are expected to be the primary threat.

This story has been updated. It was originally published at 10:40 a.m.