Hawks aim to slow down Embiid 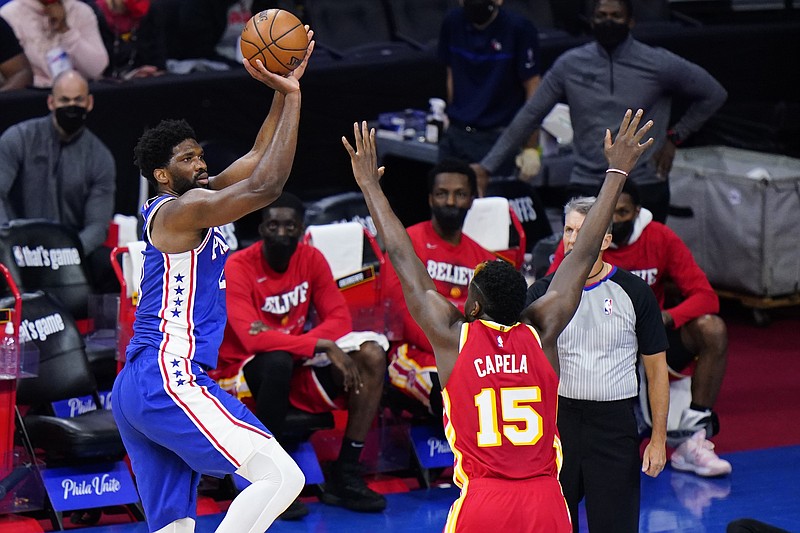 Philadelphia 76ers' Joel Embiid, left, goes up for a shot against Atlanta Hawks' Clint Capela during the second half of Game 2 in a second-round NBA basketball playoff series, Tuesday, June 8, 2021, in Philadelphia. (AP Photo/Matt Slocum)

ATLANTA -- The Hawks return to Atlanta beaming with confidence in their Eastern Conference semifinal series against the Philadelphia 76ers despite their inability to slow down, much less stop, Joel Embiid.

The 76ers big man has scored 79 points in the first two games at Philadelphia to open the series, which is tied 1-1 heading into Friday's Game 3 in Atlanta -- where the Hawks have won 13 consecutive games.

It's the longest active home winning streak in the NBA.

"I hope fans are ready to rock the house on Friday," Trae Young said after Philadelphia's 118-102 win in Game 2 on Tuesday night.

The Hawks will need their fans -- but they also know they have to correct some issues on the court.

They expect better outside shooting from Young and his backcourt partner Bogdan Bogdanovic. And until they find a defensive combination to slow Embiid, Atlanta will have to do a better job of containing his teammates.

The challenge of containing the 76ers' outside shooting grew Wednesday when the Hawks announced De'Andre Hunter will miss the remainder of the postseason.

Hunter, the team's top perimeter defender, has been scheduled for surgery on his right knee in Los Angeles on Tuesday. He was held out the first two games due to soreness in the knee. After he had swelling in the knee, the Hawks say tests found a new small tear of his lateral meniscus.

Hunter averaged 15 points in his second season but was limited by the knee injury to only 23 games.

Embiid recognizes the challenge that awaits the 76ers in Atlanta.

"The series is only 1-1," Embiid said. "There's nothing to really be happy about. We have to go over there and try to win both and take one of them at a time."

Embiid is playing with a cartilage tear in his right knee.

"I'm trying to do the best I can, limited movement and all," Embiid said.

If Embiid has been limited, it hasn't been obvious. He was active in Game 2, even extending his defensive presence to help disturb Young's outside shooting.

"Obviously he's very skilled," Capela said. "He's one of the best at his position. Just try to make it as hard as you can for him."

But Embiid can't do it alone. Atlanta proved that in its 128-124 Game 1 win, showing that even a dominant performance by Embiid alone is not enough. He had 39 points in that loss.

With Young and Bogdanovic combining to make only 3 of 13 three-point shots in Game 2, Philadelphia's Shake Milton made four three-pointers while playing only 14 minutes off the bench.

Milton was a difference-maker, but Embiid had more help in the 76ers' balanced Game 2 attack. Tobias Harris had 22 points, including 16 in the first quarter. Seth Curry had 21 points while making five three-pointers.

The loss of Hunter only adds urgency to the challenge of making it tougher for Embiid to score.

"He's a problem down in the post," said Hawks Coach Nate McMillan. "We're trying to mix up our defense with him. At times he's getting too deep. Our double teams are not getting there quick enough. ... He pretty much has had his way in the first two games down on the block."

The Hawks expect there to be lot of energy at State Farm Arena, where their last lost came on April 15 against Milwaukee. Atlanta won both home games while taking its first-round series against the New York Knicks in five games. 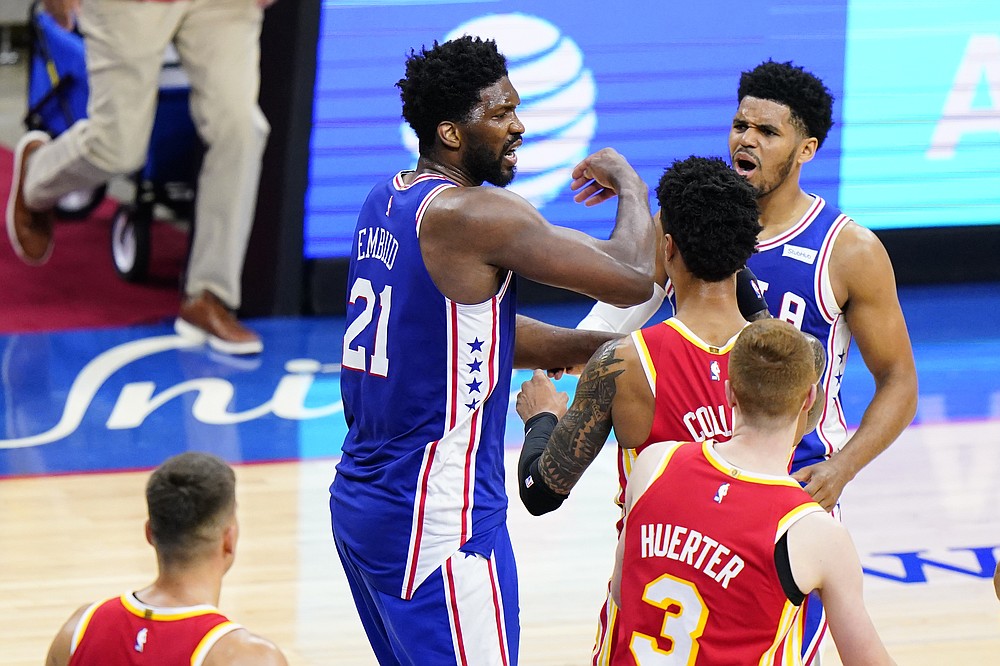 Philadelphia 76ers' Joel Embiid (21) reacts after a foul was called against him during the first half of Game 2 in a second-round NBA basketball playoff series against the Atlanta Hawks, Tuesday, June 8, 2021, in Philadelphia. (AP Photo/Matt Slocum) 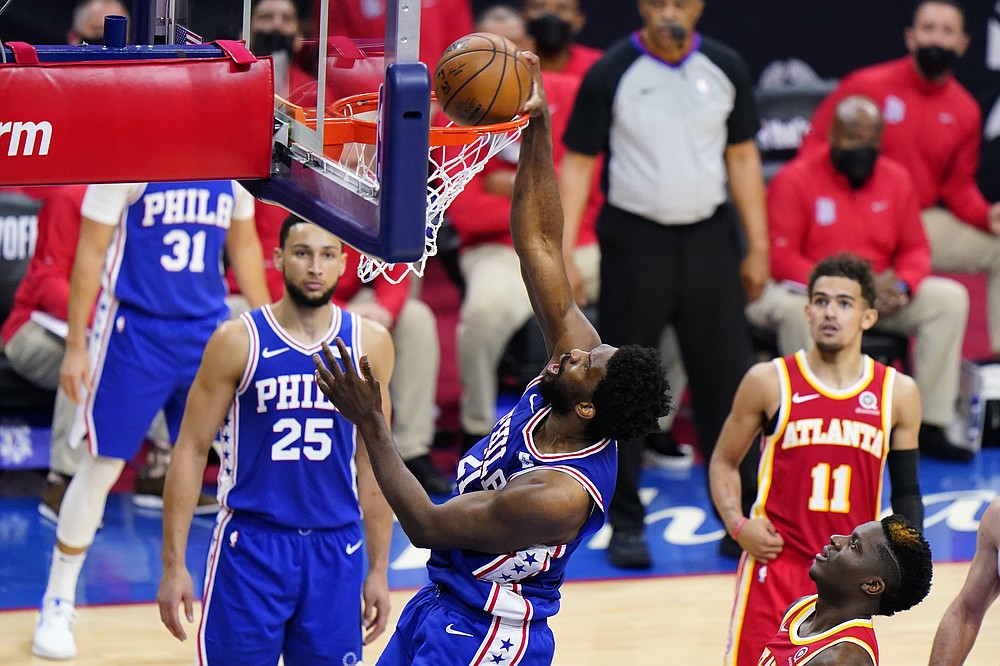 Philadelphia 76ers' Joel Embiid dunks the ball during the first half of Game 2 in a second-round NBA basketball playoff series against the Atlanta Hawks, Tuesday, June 8, 2021, in Philadelphia. (AP Photo/Matt Slocum) 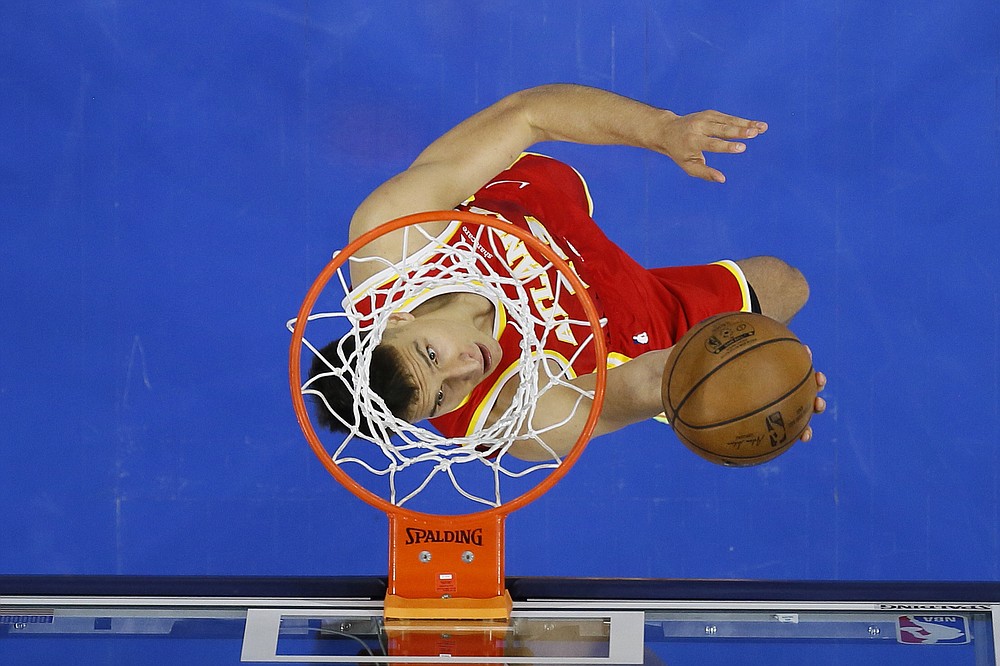 Atlanta Hawks' Bogdan Bogdanovic goes up for a shot during the second half of Game 2 in a second-round NBA basketball playoff series against the Philadelphia 76ers, Tuesday, June 8, 2021, in Philadelphia. (AP Photo/Matt Slocum) 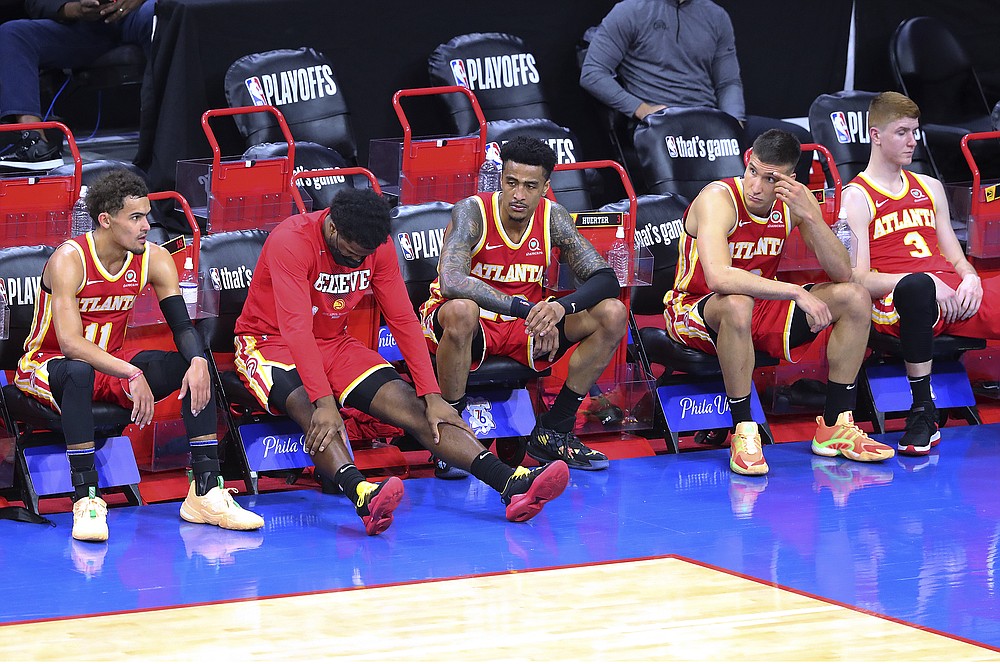