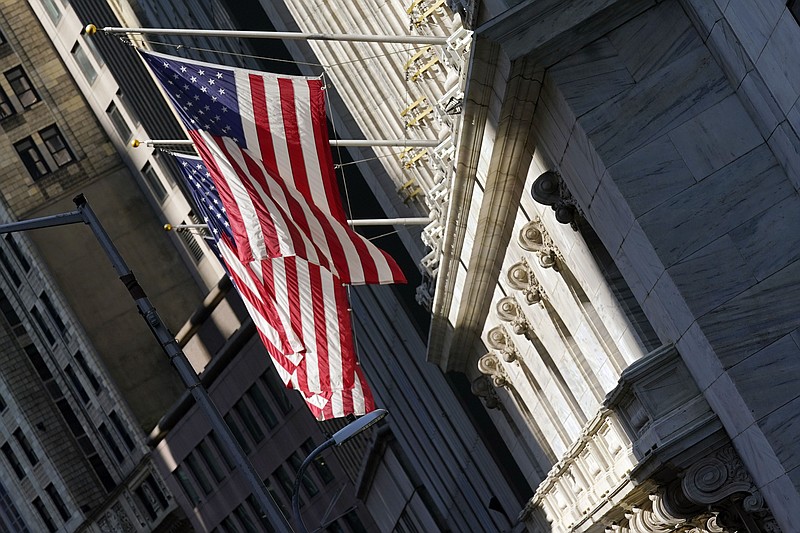 U.S. flags fly from the facade of the New York Stock Exchange, Monday, June 7, 2021. Stocks are opening mostly higher on Wall Street as gains for Big Tech companies offset weakness in banks and other parts of the market. The S&P 500 edged up 0.1% in the early going Wednesday, June 9. (AP Photo/Richard Drew)

A slide in banks and industrial companies nudged stocks on Wall Street to modest losses Wednesday after an early gain faded in the last half-hour of trading. Stocks championed by hordes of online retail investors, the "meme" stocks as they have become known, were volatile once again.

The S&P 500 slipped 0.2%, erasing its meager gain from a day earlier. The benchmark index's modest moves this week have it on track for its first weekly loss in three weeks. The Dow Jones Industrial Average gave up 0.44%, while the Nasdaq held up somewhat better, ending down just 0.1%.

Treasury yields slipped. The yield on the 10-year Treasury fell to 1.49% from 1.52% late Tuesday. The falling yields broadly weighed down banks, which rely on higher yields to charge more lucrative interest on loans. JPMorgan and Citigroup fell 1.2%.

Several health care companies made solid gains. Merck rose 2.3% after announcing a supply agreement with the U.S. and Canada for a potential covid-19 treatment. AbbVie gained 1.5% after announcing a collaboration with Caraway Therapeutics to make treatments for Parkinson's disease and other neurodegenerative disorders.

Investors continue to focus a significant amount of attention on inflation. China's producer price index, which measures prices of raw goods and services, jumped 9% from a year earlier in May, the fastest increase since 2008 and above analysts' forecasts. Surging prices for oil and other commodities and manufacturing components such as semiconductors were the main factor behind the jump in producer prices there.

Aside from surging prices of raw materials, fuel and other items needed for manufacturing, factories are struggling to keep up with demand as the pandemic recedes in many places. That has pushed up prices of everything from food to household staples.

Investors will get closely watched U.S. inflation data today and how it might affect ultra-low interest rates and other market-supporting policies.

The market has been relatively constrained over the past several days and investors have parsed any data to judge whether rising inflation will be temporary, as the Federal Reserve thinks, or more permanent.

The Labor Department's release of the consumer price index today will add to that discussion, particularly since it comes shortly before the Federal Reserve's next meeting on interest rate policy next week.

The original "meme" stock, GameStop, said after the closing bell Wednesday that it has brought on a pair of Amazon veterans as its new chief executive and chief financial officer to aid in its much anticipated digital turnaround. The company also reported a smaller quarterly loss than a year ago as revenue increased. Its shares fell 3% in after-hours trading.